4-Amino-1,2,4-triazole-3-thione as a Promising Scaffold for the Inhibition of Serine and Metallo-β-Lactamases

In the past decade, pharmaceutical nanotechnology has proven to be a promising alternative for improving the physicochemical and biopharmaceutical features for conventional pharmaceutical drug formulations. The goal of this study was to develop, characterize, and evaluate the in vitro and in vivo release of the model drug carbamazepine (CBZ) from two emulsified formulations with different droplet sizes (coarse and nanometric). Briefly, oil-in-water emulsions were developed using (i) Sacha inchi oil, ultrapure water, TweenTM 80, and SpanTM 80 as surfactants, (ii) methyl-paraben and propyl-paraben as preservatives, and (iii) CBZ as a nonpolar model drug. The coarse and nanometric emulsions were prepared by rotor–stator dispersion and ultra-high-pressure homogenization (UHPH), respectively. The in vitro drug release studies were conducted by dialysis, whereas the in vivo drug release was evaluated in New Zealand breed rabbits. The results showed that nanoemulsions were physically more stable than coarse emulsions, and that CBZ had a very low release for in vitro determination (<2%), and a release of 20% in the in vivo study. However, it was found that nanoemulsions could significantly increase drug absorption time from 12 h to 45 min. View Full-Text
Keywords: carbamazepine; coarse emulsion; in vitro/in vivo drug release; nanoemulsion; ultra-high-pressure homogenization carbamazepine; coarse emulsion; in vitro/in vivo drug release; nanoemulsion; ultra-high-pressure homogenization
►▼ Show Figures 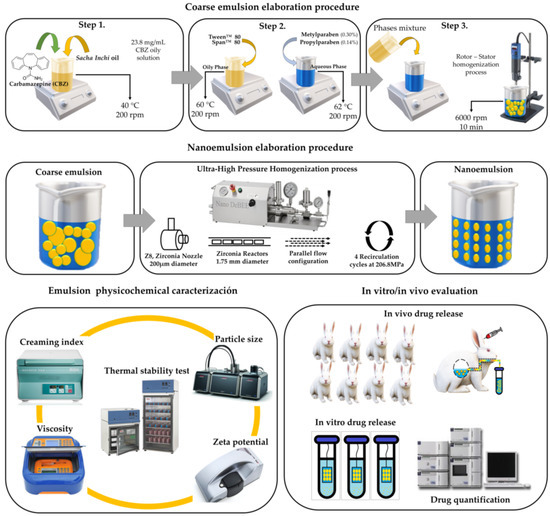