BioMEMS –Advancing the Frontiers of Medicine

Implantable biosensors were developed for real-time monitoring of pressure and strain in the human body. The sensors, which are wireless and passive, consisted of a soft magnetic material and a permanent magnet. When exposed to a low frequency AC magnetic field, the soft magnetic material generated secondary magnetic fields that also included the higher-order harmonic modes. Parameters of interest were determined by measuring the changes in the pattern of these higher-order harmonic fields, which was achieved by changing the intensity of a DC magnetic field generated by a permanent magnet. The DC magnetic field, or the biasing field, was altered by changing the separation distance between the soft magnetic material and the permanent magnet. For pressure monitoring, the permanent magnet was placed on the membrane of an airtight chamber. Changes in the ambient pressure deflected the membrane, altering the separation distance between the two magnetic elements and thus the higher-order harmonic fields. Similarly, the soft magnetic material and the permanent magnet were separated by a flexible substrate in the stress/strain sensor. Compressive and tensile forces flexed the substrate, changing the separation distance between the two elements and the higher-order harmonic fields. In the current study, both stress/strain and pressure sensors were fabricated and characterized. Good stability, linearity and repeatability of the sensors were demonstrated. This passive and wireless sensor technology may be useful for long term detection of physical quantities within the human body as a part of treatment assessment, disease diagnosis, or detection of biomedical implant failures. View Full-Text
Keywords: magnetic harmonic fields; wireless sensors; passive detection; stress; pressure magnetic harmonic fields; wireless sensors; passive detection; stress; pressure
►▼ Show Figures 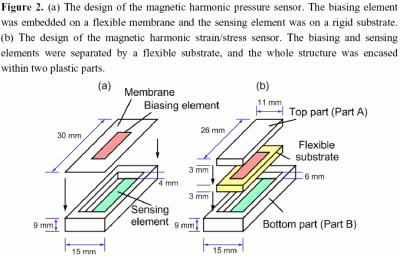