Development of QCM Trimethylamine Sensor Based on Water Soluble Polyaniline

A rapid, sensitive, low-cost device to detect trimethylamine was presented in thispaper. The preparation of water soluble polyaniline was firstly studied. Then the polyanilinewas characterized via Fourier transform infrared spectroscopy (FTIR), UV-visiblespectroscopy and scanning electron microscopy (SEM). Based on the water solublepolyaniline film, a quartz crystal microbalance (QCM) sensor for trimethylamine detectionwas fabricated and its characteristics were examined. The sensor consisted of one quartzcrystal oscillator coated with the polyaniline film for sensing and the other one forreference. Pretreated with trimethylamine, the QCM sensor had an excellent linearsensitivity to trimethylamine. Easily recovered by N2 purgation, the response of the sensorexhibited a good repeatability. Responses of the sensor to trimethylamine, ethanol and ethylacetate were compared, and the results showed that the response was related to the polarityof the analyte vapor. Experimental result also showed that the sensitivity of the sensor wasrelatively stable within one month. The simple and feasible method to prepare and coat thepolyaniline sensing film makes it promising for mass production.
Keywords: QCM; Gas Sensor; Conducting Polymer; Polyaniline; Trimethylamine QCM; Gas Sensor; Conducting Polymer; Polyaniline; Trimethylamine

Biogenic amines are formed by the activity of bacterial amino acid decarboxylase during the degradation processes of proteins, which have a carcinogenic effect on human body and can be used to indicate bacterial contamination. Being one of biogenic volatile amines, trimethylamine is a good target for the detection of biogenic amines to evaluate the quality of meat food products [1-3]. In human body, trimethylamine is derived from diet either directly from the consumption of foods containing trimethlamine, or by the intake of food containing precursors to trimethylamine such as trimethylamine-N-oxide, choline and L-carnitine. Normally, the flavin-containing monooxygenase isoform 3 (FMO3) enzyme converts fishy-smelling trimethylamine into another molecule that has no odor. If the enzyme is deficient or its activity is reduced, trimethylamine is not processed properly and can build up in the body. As excess trimethylamine is released in a person's sweat, urine, and breath, it causes the strong odor characteristic of trimethylaminuria [4]. Trimethylamine is also of clinical interest because of its potential to contribute to neurological toxicity and ‘uraemic breath’ in patients with end-stage renal disease [5]. Together with triethylamine, trimethylamine is found to be emitted by building materials degraded by microbial growth [6]. Trimethylamine has an unpleasant smell, and is irritant to the skin, eyes, mucous membranes and respiratory tract [7].In a word, a rapid, sensitive, low-cost method to detect trimethylamine is meaningful.
Various analytical methods have been reported in literature to detect trimethylamine [1, 2, 8-11]. However, all these methods (photometry, gas chromatography, colorimetric analysis, high performance liquid chromatography, ion mobility spectrometry, etc.) are relatively cumbersome, time consuming and require experienced operators.
Polyaniline, a kind of conductive conjugated polymer, has been regarded as a good sensing material due to its advantages of gas sensing ability and optimum performance at room temperature. It has been exploited in thin film sensors for several gas molecules as well as volatile organic compounds [12-16]. In spite of the various advantages of polyaniline based gas sensors, some fundamental problems, such as long-time instability and irreversibility and low selectivity, still persist [17]. Usually solubility of polyaniline is a problem to fabrication quality films. We have recently investigated the method to prepare water-soluble polyaniline based on oxidative polymerization. Moreover, the effect of trimethylamine on the conductivity of polyaniline was investigated [18].
QCM sensor can be constructed by coating the surface of a quartz crystal electrode with a film capable of interaction with the environment of interest. The operating principle of QCM sensors is based on the interaction between the surface of a quartz crystal coated with the sensing materials and the target materials. The Sauerbrey equation was developed for oscillation in air and only applies to rigid mass attached to the crystal [19]. It gives the change in the oscillation frequency of piezoelectric quartz (Δf) as a function of the mass (Δm) added to the crystal: where Δf is the observed frequency change (Hz), f0 is the fundamental resonant frequency of crystal, A is the active area of the crystal (between electrodes), ρq is the density of quartz and &upsilon;q is the shear wave velocity in the quartz. Quartz crystal microbalance (QCM) sensors were widely investigated due to their high sensitivity, durability and linearity for mass of the target materials [20-24].
Chemiresistors are the most popular device configuration of gas sensors based on conducting polymer. However, the resistance of chemiresistor is influenced by many ambient factors, and not only determined by the resistance of the conducting polymer sensing film, but also the contact resistance of electrodes. Moreover, other disadvantages for use of chemiresistors are low limit of detection and sensitivity, compared with sensors based on other configurations such as transistors, optic devices and QCMs. For transistor, its preparation and characterization is slightly complicate. The sensitivity of optic sensors is high, but the detecting procedure is complicate. Because QCM is rather sensitive to mass change, adsorbing a very small amount of analyte can be detected through frequency change. Although a number of polymers have been successfully employed in the coating of QCM sensors [20, 24], polyaniline-coated QCM gas sensor has seldom been investigated. Therefore, we attempted to coat a polyaniline film on a quartz crystal surface, to make a low-cost, high-sensitivity and rapid-response QCM trimethlamine gas sensor. The performance of the sensor was investigated.

Ammonium peroxydisulfate (AR), hydrochloric acid (AR), poly(sodium-p-styrenesulfonate), 33% trimethylamine solution, aniline (AR), ethyl acetate (AR), enthanol (AR) are commercially available. Aniline was vacuum distilled prior to use. AT-cut 6.000 MHz (HC-49/U) quartz crystals with silver electrodes on both sides were purchased from Hosonic International (Hangzhou) Ltd, China. The crystals are rinsed by ethanol and then deionized water prior to use.

Polyaniline was prepared by polymerization of aniline with chemical oxide method as described previously [18]. A small amount of poly(sodium- p-styrenesulfonate) was added in a 0.1 M hydrochloric acid solution containing 0.01 M aniline and ammonium peroxydisulfate. The mixture was left undisturbed for 24 h, and then blue-black aqueous solution of polyaniline was obtained. The FTIR spectra of water-soluble polyaniline were recorded in silicon disks with an IFS66 V/S Fourier transform infrared spectrometer (Bruker Company). The UV-vis absorption of water-soluble polyaniline on the quartz glass was recorded by a CARY Bio100 spectrophotometer. The SEM image of soluble polyaniline composites coated on the glass was studied by an S-4800 (Hitachi Company) electron scanning microscope.

2.3. Preparation and pretreatment of coated sensor

A drop-coating [25] method was used to form the water-soluble polyaniline film on the surface of the electrode. An AT-cut 6.000 MHz crystal was rinsed repeatedly into ethanol and deionized water and dried in air at room temperature. Then two microliters of polyaniline aqueous solution was dispensed onto the surface of the electrode using a micropipette. The device was then dried at room temperature.
The pretreatment of polyaniline-coated sensor is described as following. It was put into a sealed chamber (500 mL), and desorbed by high-purity N2. Then the sensor was exposed to 200 ppm trimethylamine in N2 for deprotonation.

3.2. Pretreatment of the polyaniline-coated sensor

To investigate the response repeatability of the sensor, a cycle test was conducted while a pretreated polyaniline-coated QCM sensor was exposed to trimethylamine. To recover the sensing QCM, high-purity N2 was purged through the chamber until full desorption was achieved. Figure 3 depicts the frequency difference changing alternatively with trimethylamine injection and high-purity N2 purgation. The result shows that the adsorption-desorption process on the polyaniline film was highly reversible for trimethylamine molecules. The time to reach 95% of the plateau response is about 60s, which is faster than the conductivity response reported previously [18].

The sensor was exposed to trimethylamine, ethanol and ethyl acetate of same concentration (200 ppm), respectively. Plots of the responses for the sensor upon the introduction of trimethylamine, ethanol and ethyl acetate in N2 is shown in Figure 4. This figure indicates that response of the sensor after pretreatment strongly depends on the polarity of adsorbed vapors. Since the electronegativity of the nitrogen of polyaniline base is very large, the radius of the nitrogen atom is small, and nitrogen atom has a lone electron, the interaction between the surface of the polyaniline base and polar vapors will contain hydrogen bonding and a strong van der Waals force. Therefore, the stronger the polarity of vapor, the response is higher.

3.5. Sensitivity of the responses

In order to investigate the durability of the sensor, further experiments were carried out. The response of polyaniline-coated QCM sensor to 120 ppm trimethylamine in N2 was recorded over 1 month. The response change over one month period is shown in Figure 6. The response after one month dropped about 20% of the initial sensitivity. The sensor's responses decreased with storing time at first due to the aging of polyaniline, and then remained stable at about 80% of the initial sensitivity.

Water-soluble polyaniline based QCM trimethylamine sensors were developed and characterized. The preparation of the composite polyaniline film on QCM was rather simple. Pretreated with trimethylamine, the sensors exhibited a good linear response to trimethylamine. Experimental results showed that responses of the sensors depended on the polarity of vapors absorbed by polyaniline. Purged by N2, the sensing film could be easily recovered, so that the sensors could be repeatedly utilized. The method used to prepare the sensor was very simple and feasible. It has potential for mass production at a low cost. As a sensing film for QCM trimethlamine sensor, thin polyaniline films have not been fully exploited. Although the sensor's response was reasonable stable within one month, there are still lots of work to be done on the long term stability.

The work is supported by the National Creative Research Groups Science Foundation of China (NCRCSFC: 60421002). 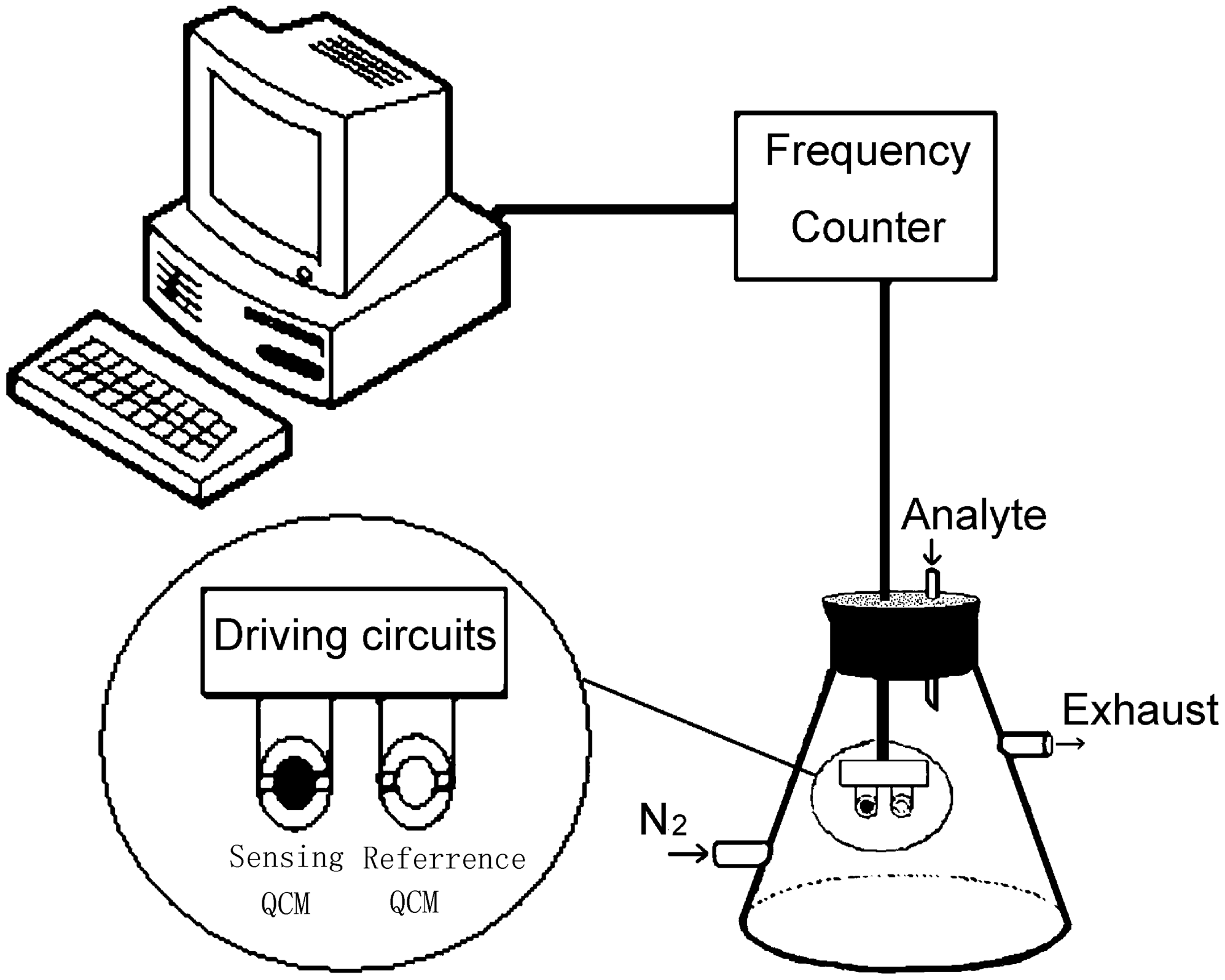 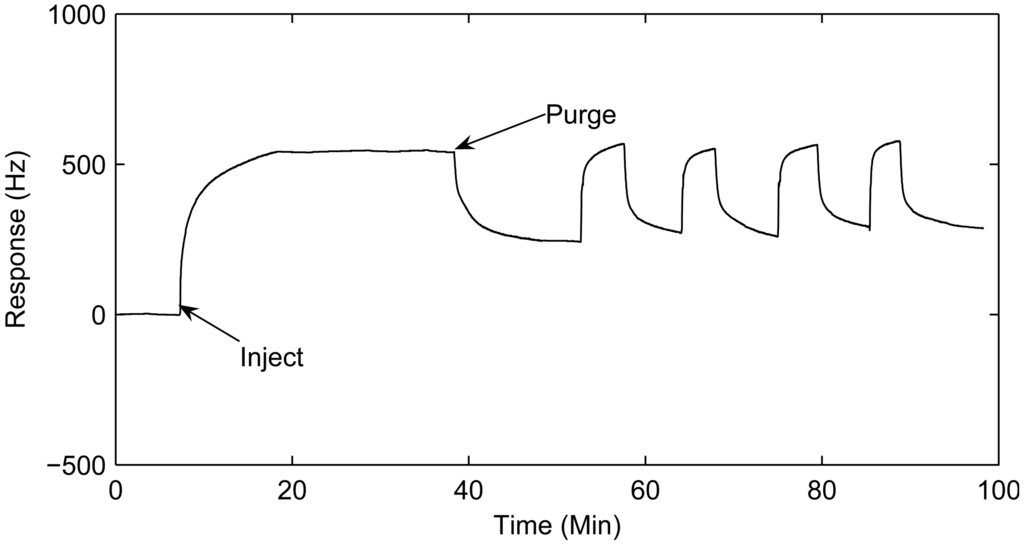 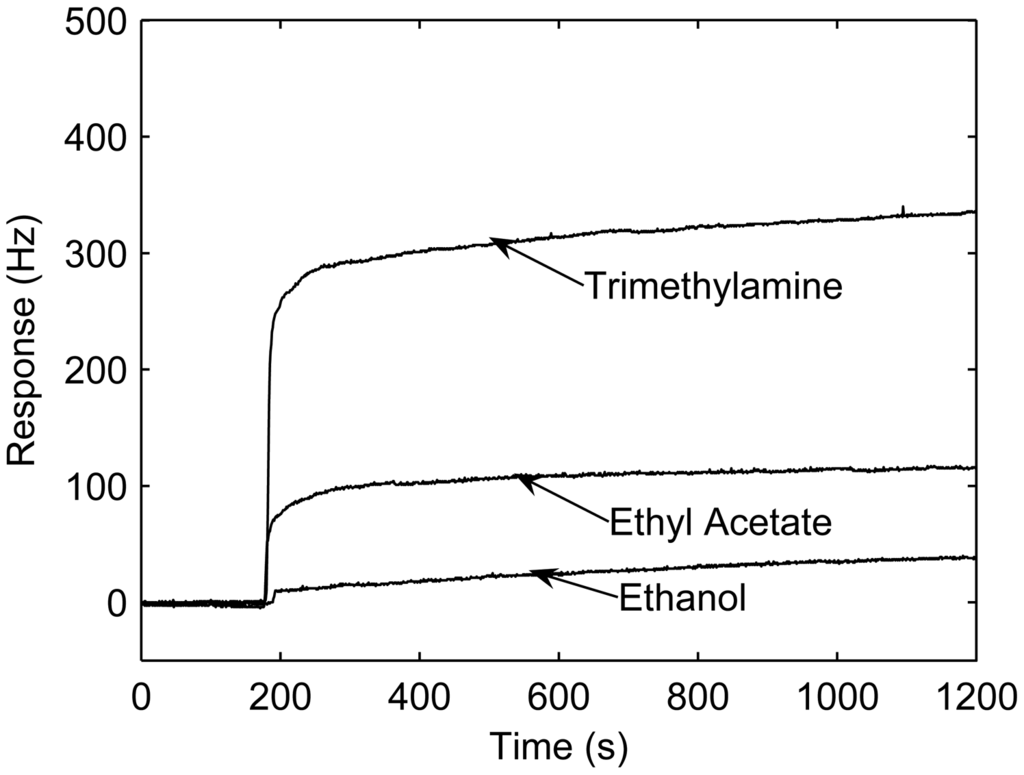 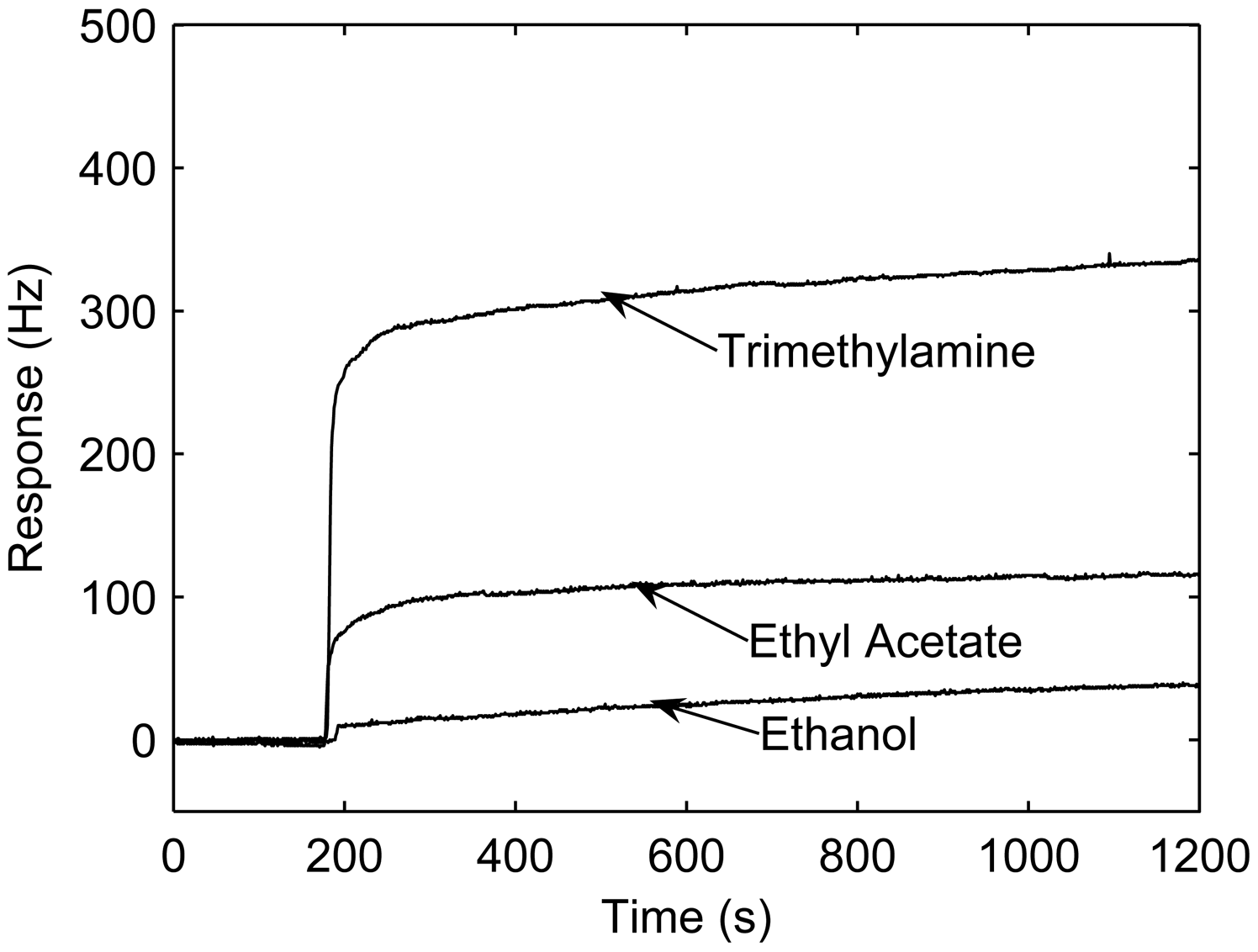 © 2007 by MDPI ( http://www.mdpi.org). Reproduction is permitted for noncommercial purposes.