Radiation sources should be handled carefully and controlled strictly. However, in the events of theft and loss of sources or undesired acts of terrorism using such sources, it is necessary to identify multiple sources over a wide search area rapidly [1]. Several methods for radiation source identification have been developed [2,3,4,5,6,7]. For example, Huo et al. reported a method to estimate the location and intensity of radiation sources by using a mobile robot equipped with a Geiger–Müller (GM) counter and laser range sensor [4]. They investigated the selection of the measurement position by reinforcement learning for the autonomous identification of the radiation sources. Besides this, methods to visualize the gamma-ray intensity in an environmental three-dimensional map were developed. Vetter et al. demonstrated radiation source detection using both simultaneous localization and mapping (SLAM) based on a light detection and ranging (LiDAR) system and gamma-ray images obtained using gamma imaging methods such as coded-aperture and Compton imaging [5]. Sato et al. applied this method to visualize the gamma-ray intensity at the site of Fukushima Daiichi Nuclear Power Plant [6,7].
The typical field of view of conventional gamma imaging is less than 180°, whereas 4π Compton imaging is sensitive to gamma rays incident on a detector from all directions. Hence, 4π Compton imaging can allow more rapid identification of radiation sources than that possible by methods based on conventional gamma imaging. In this regard, we developed a 4π gamma-ray imaging system using gadolinium aluminum gallium garnet (GAGG) scintillators [8,9] and CdTe detectors [10,11]. Previous studies demonstrated that the location and activity of hidden gamma-ray sources can be estimated by combining gamma-ray images measured at multiple positions [11,12]. In autonomous source identification by a 4π Compton imager mounted on a robotic vehicle, it is necessary to optimize the measurement procedure, i.e., the measurement positions around the target sources. For this purpose, we proposed a detector movement algorithm for a single source [13,14]. In this study, we developed a path-planning system for radioisotope identification devices by using 4π gamma imaging based on random forest (RF) analysis.

3. Verification of the Path-Planning System

3.1. Verification Based on the Integrated Simulation Model

As a preparatory step to demonstrate the usefulness of the path-planning system for multiple sources, it was verified whether the system could efficiently identify a single source in this paper. The path-planning system was verified using the integrated simulation model mentioned in Section 2. A 137Cs point source (activity: 1.8 MBq) was set within the search area (Figure 5). This search area was designed identically to that in the experiment described in Section 3.2. The source location was at (2.5, 5.5, 0.0), and the initial measurement position was (0, 0, 0) in m. The acquisition time for 4π gamma imaging at each position was 10 min. The distance per step to the next measurement position was 1.5 m. The detector could be moved up to 0.1 m close to the obstacles (i.e., walls) in the search area. The path-planning system was used for selecting the measurement positions. Two patterns of detector movement—Path I selected by the path-planning system, and Path II selected by tracing the edges of the walls in the search area—were investigated, as shown in Figure 5.
Figure 6a shows the estimated source intensities and locations obtained by Path I in a 3D voxel space. The result is summarized in Table 4. In the table, the column “Area where a source is located” indicates how small a source range can be estimated. The column “Estimated source location” gives the weighted centers of the estimated voxels, and “Error from true source position” gives the difference between the true source location and the estimated location. Further, “Estimated source activity” lists the median of the estimated source intensities of all the estimated voxels. As measurements progressed, the estimated source area and the error from the true source location decreased, and in the fourth measurement, the source location could be estimated with an error of less than 0.3 m.
Next, we simulated the source identification using Path II. The results are provided in Table 5 and Figure 6b. Five measurements were required to achieve a source identification accuracy similar to that obtained using Path I. These results show that the detector movement followed by the path-planning system was effective for source identification.

3.2. 137Cs Source Identification by a Prototype Device by 4π Gamma Imaging with the Path-Planning System

In this study, a prototype 3D multipixel CdTe detector (Hitachi Consumer Electronics Co., Ltd., Hitachi, Japan) was used as a 4π gamma imager. The size of a single CdTe pixel was 8 × 12.5 × 2.2 mm3, and the total number of pixels were 8 × 12 × 15 = 1440. These 1440 pixels were arranged in a three-dimensional structure. The energy deposited on each pixel because of the incident gamma rays was recorded as listmode data. The basic performance of the detector as the 4π gamma imager was reported in our previous papers [10,11].
The detector, a 3D-LiDAR (Velodyne Lidar, Inc., San Jose, CA, USA, VLP-16), a spherical camera (Richo, theta-V), a battery, and a laptop PC for acquiring and storing data were mounted on a robotic vehicle (Vstone Co., Ltd., Osaka, Japan, Mecanum Rover ver. 2.1). This device can move for about 4 h without an external power supply. The robotic vehicle can be controlled by a wireless controller and can rotate and move in eight directions. The data from the detector were acquired by the laptop PC and sent together with the 3D-LiDAR data to a control PC for data processing via a wireless connection. In the control PC, SLAM was performed using the 3D-LiDAR data for mapping the surrounding environment and self-position estimation for the vehicle. In addition, the calculations for source identification and decision-making regarding the next measurement position were performed in the control PC.
This experiment was conducted in a room of the same size and under identical conditions as in the simulation (Section 3.1). A top view of the room map with the locations of the source and measurement points is shown in Figure 7. This map was obtained by SLAM with the xy plane at z = 0.2 m. The 137Cs point source was placed at (1.7, 4.3, 0.2) m, as shown in Figure 8.
Table 6 lists the source intensity and location results estimated in this experiment. The top view of the search area is shown in the left column in Figure 9. The identification results of the estimated source intensities and locations in the 3D voxel space and in the xy plane at z = 0.2 obtained as the measurements proceed are also shown in Figure 9. After measurement at the first measurement point (#1), the next measurement position was selected by the path-planning system and the detector was moved. Measurements were taken at the second point. Thus, measurements were taken at four points. After four measurements, the error in the true source position was reduced to ±0.1 m relative to the true source location. The source activity was estimated within a relative error of 40%. Thus, we successfully demonstrated that measurement points #1 to #4 as determined by the path-planning system lead to the estimated source direction autonomously and that the system selects the best measurement positions for 137Cs single source identification.

This work was supported in part by JSPS KAKENHI: Grant-in-Aid for Scientific Research (A), Grant Number 19H00881.

All relevant data used in the evaluation is displayed in the graphs contained within the article. Values for the raw data points are available upon request.

The authors would like to thank Ken’ichi Tsuchiya at National Research Institute of Police Science for his helpful advice and the referees for their valuable comments and positive criticism.

There are no conflict of interest to declare. 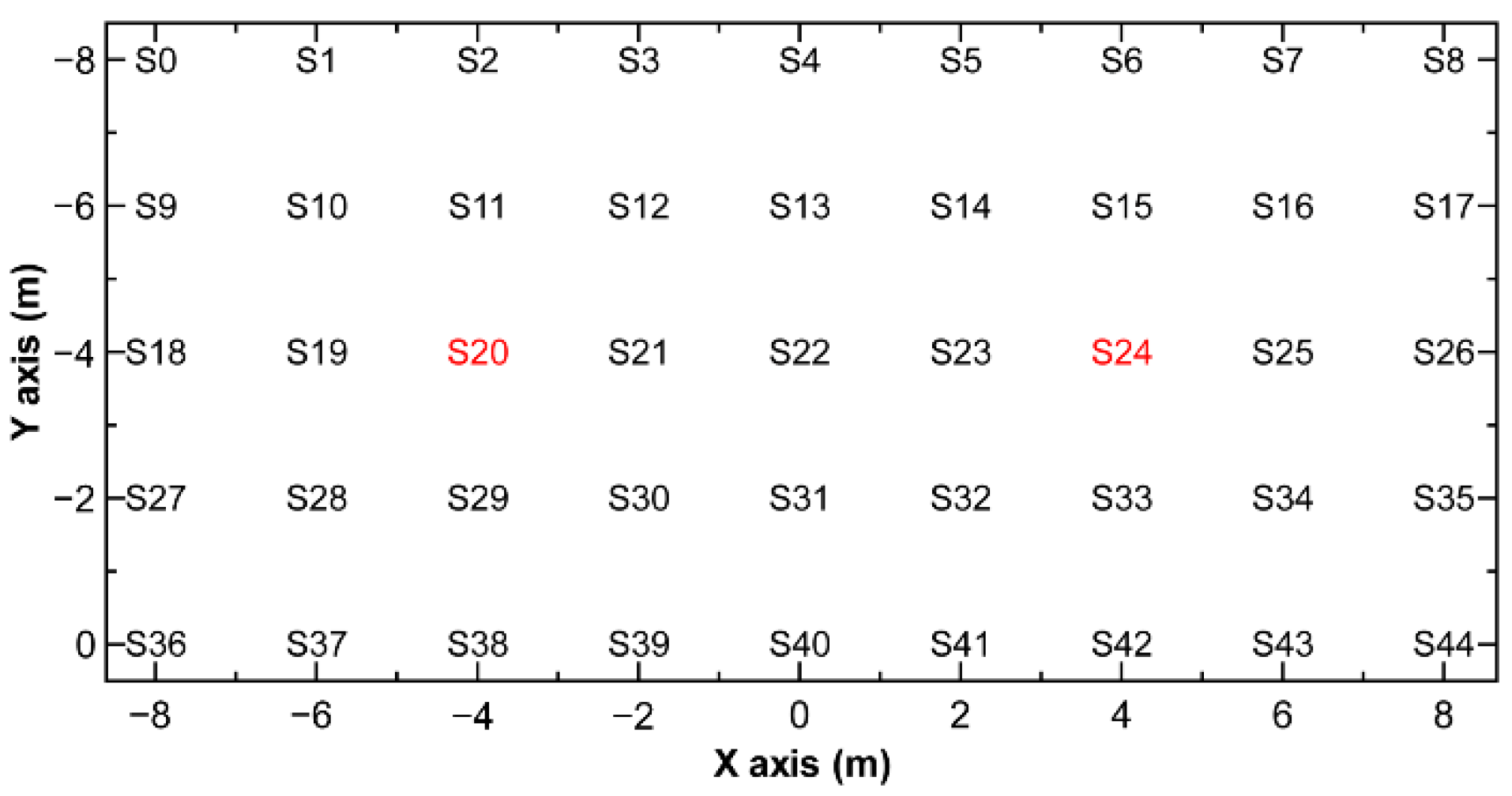 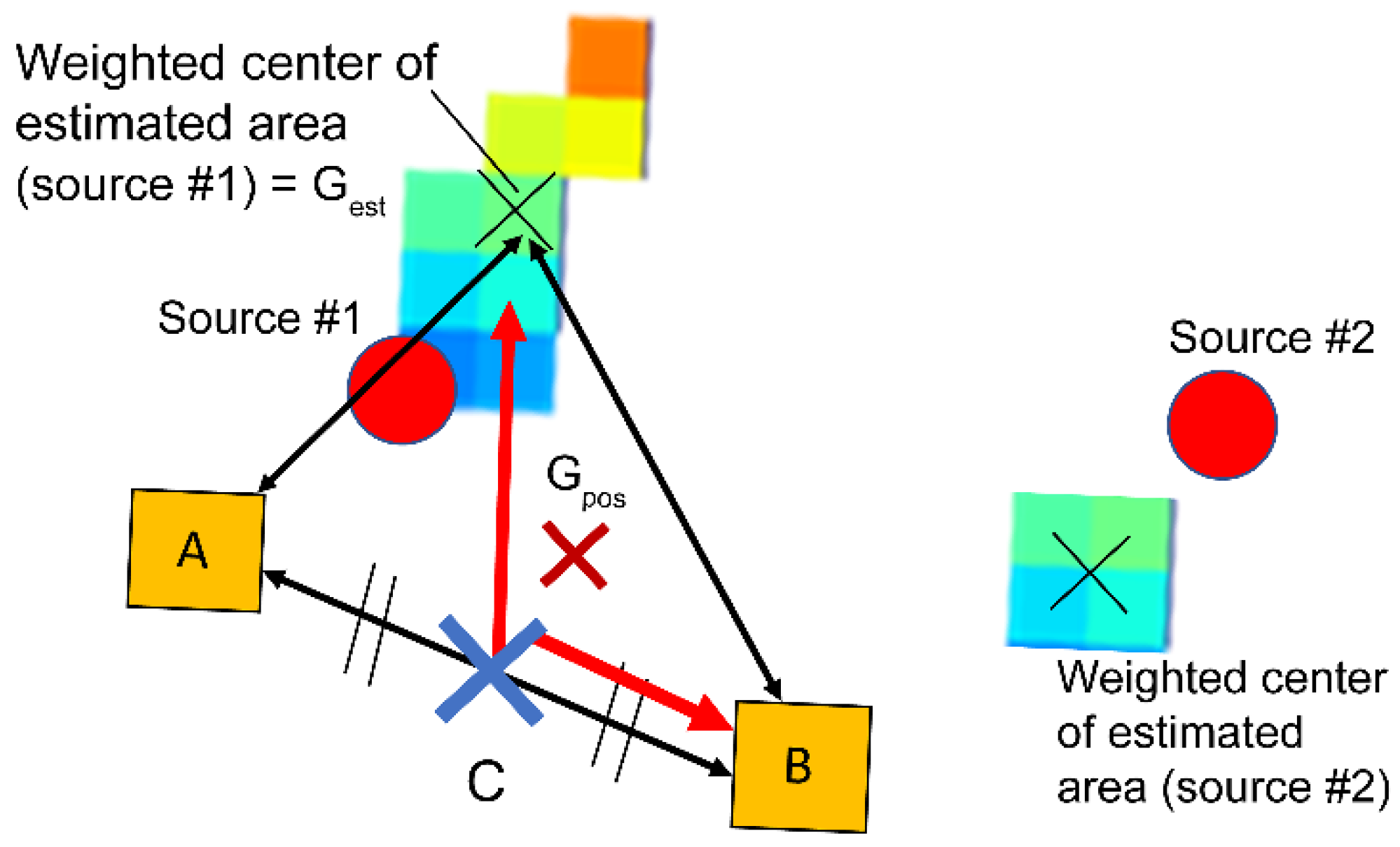 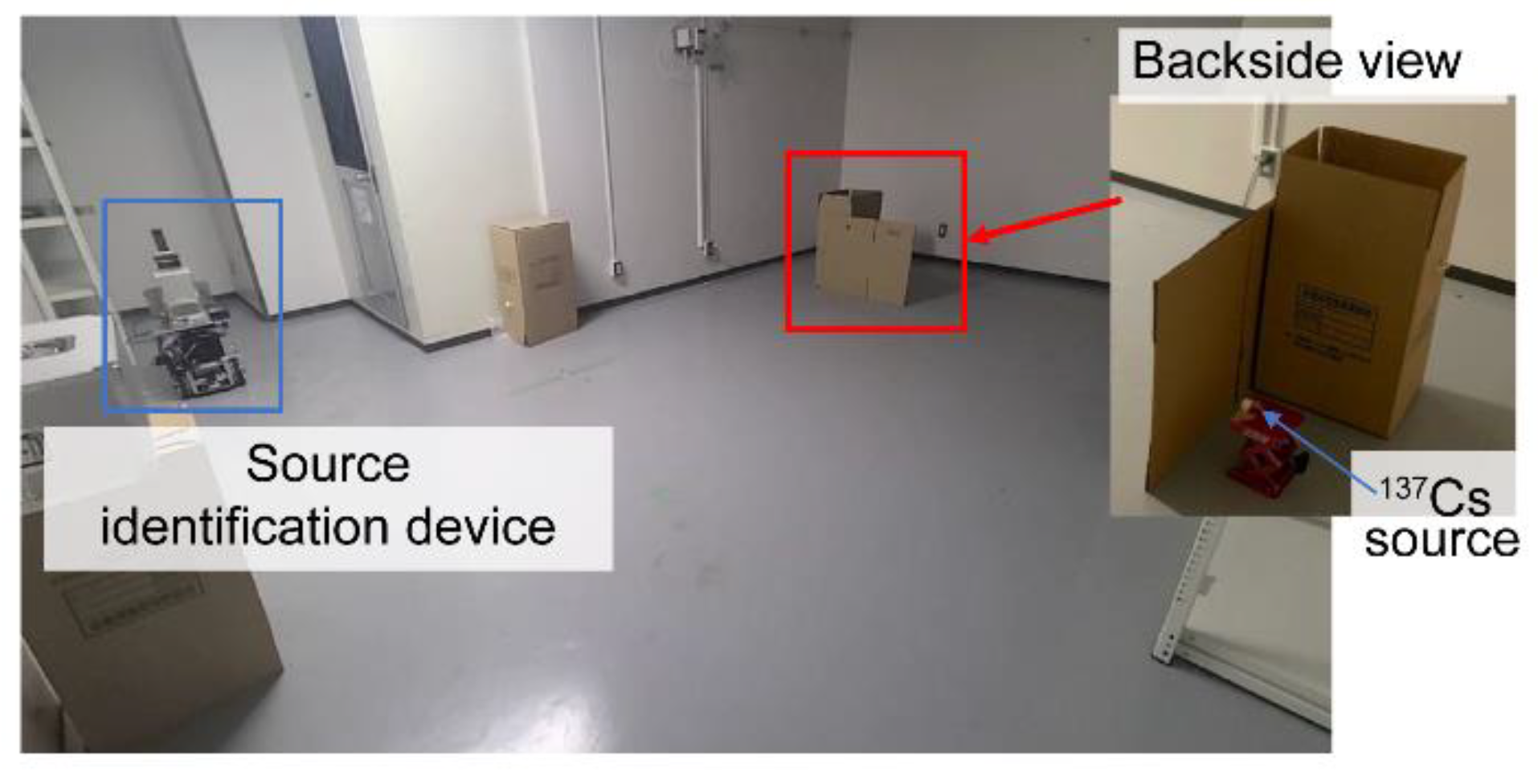 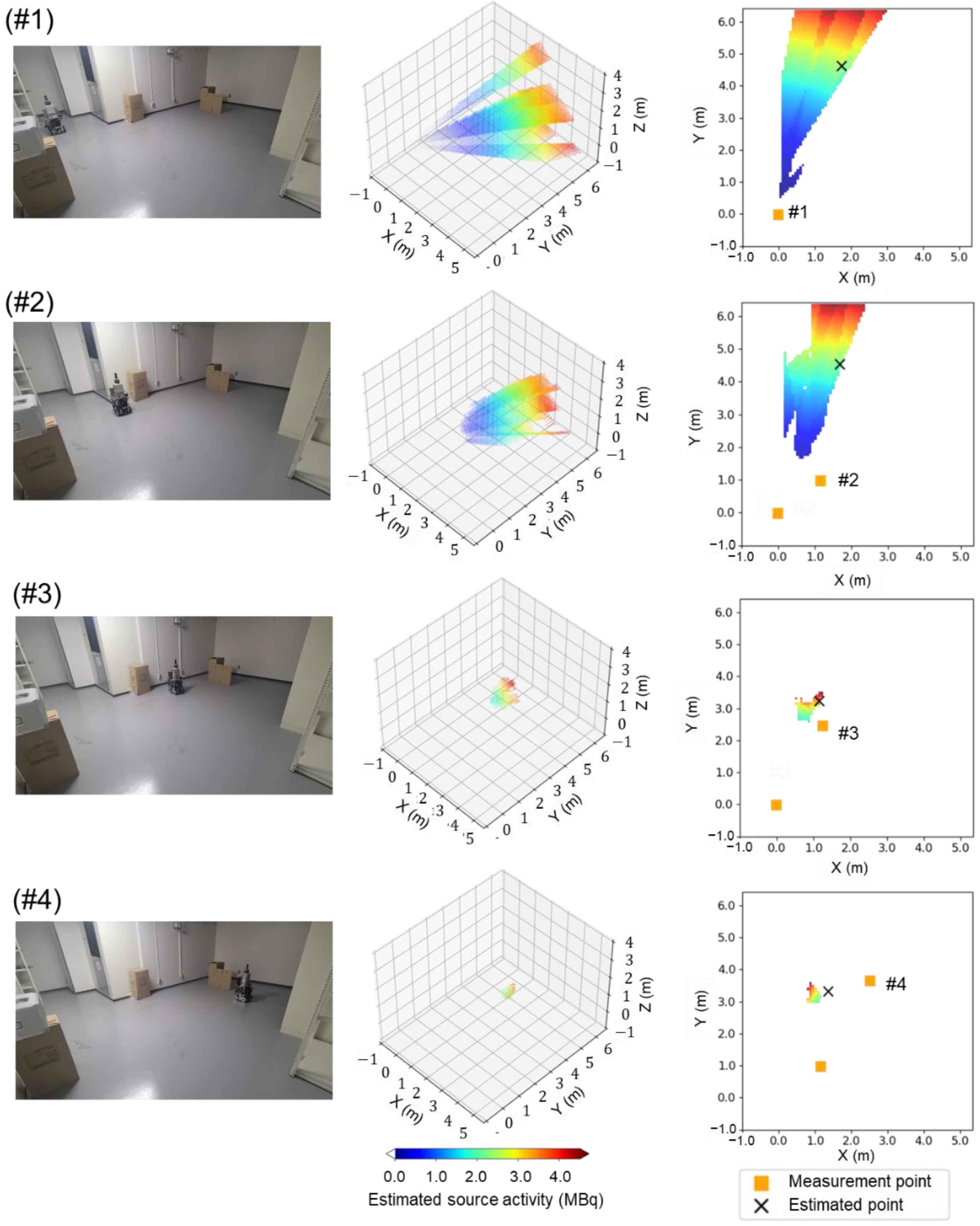