Plant leaf 3D architecture changes during growth and shows sensitive response to environmental stresses. In recent years, acquisition and segmentation methods of leaf point cloud developed rapidly, but 3D modelling leaf point clouds has not gained much attention. In this study, a parametric surface modelling method was proposed for accurately fitting tea leaf point cloud. Firstly, principal component analysis was utilized to adjust posture and position of the point cloud. Then, the point cloud was sliced into multiple sections, and some sections were selected to generate a point set to be fitted (PSF). Finally, the PSF was fitted into non-uniform rational B-spline (NURBS) surface. Two methods were developed to generate the ordered PSF and the unordered PSF, respectively. The PSF was firstly fitted as B-spline surface and then was transformed to NURBS form by minimizing fitting error, which was solved by particle swarm optimization (PSO). The fitting error was specified as weighted sum of the root-mean-square error (RMSE) and the maximum value (MV) of Euclidean distances between fitted surface and a subset of the point cloud. The results showed that the proposed modelling method could be used even if the point cloud is largely simplified (RMSE < 1 mm, MV < 2 mm, without performing PSO). Future studies will model wider range of leaves as well as incomplete point cloud. View Full-Text
Keywords: leaf point cloud; surface fitting; principal component analysis; slice; particle swarm optimization leaf point cloud; surface fitting; principal component analysis; slice; particle swarm optimization
►▼ Show Figures 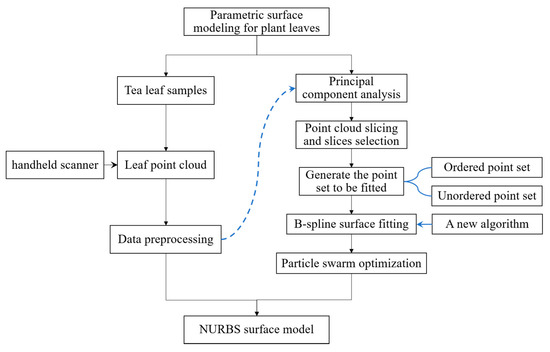