BIONOTE as an Innovative Biosensor for Measuring Endocannabinoid Levels

In this study, a novel approach was developed to quantify endocannabinoids (eCBs), and was based on the liquid biosensor BIONOTE. This device is composed of a probe that can be immersed in a solution, and an electronic interface that can record a current related to the oxy-reductive reactions occurring in the sample. The two most representative members of eCBs have been analysed in vitro by BIONOTE: anandamide (N-arachidonoylethanolamine, AEA) and 2-arachidonoylglycerol (2-AG). Bovine serum albumin was used to functionalize the probe and improve the sensibility of the whole analytical system. We show that BIONOTE is able to detect both AEA and 2-AG at concentrations in the low nanomolar range, and to discriminate between these eCBs and their moieties arachidonic acid, ethanolamine and glycerol. Notably, BIONOTE distinguished these five different molecules, and it was also able to quantify AEA in human plasma. Although this is just a proof-of-concept study, we suggest BIONOTE as a cheap and user-friendly prototype sensor for high throughput quantitation of eCB content in biological matrices, with an apparent diagnostic potential for tomorrow’s medicine. View Full-Text
Keywords: endocannabinoids; liquid biosensor; BIONOTE endocannabinoids; liquid biosensor; BIONOTE
►▼ Show Figures 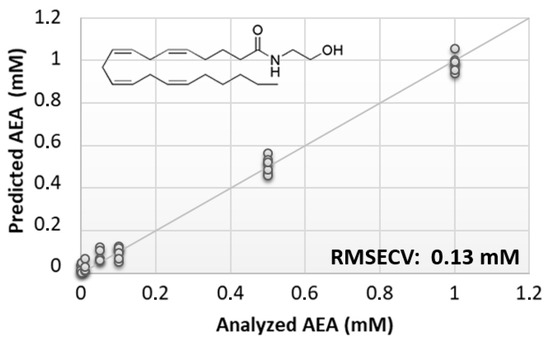