:
In this paper, we describe the possibility of using the energy of a compressed air flow, where cryogenic temperatures are achieved within the flow behind the nozzle, when reaching a critical flow in order to maximize the energy gained. Compared to the energy of compressed air, the energy obtained thermoelectrically is negligible, but not zero. We are therefore primarily aiming to maximize the use of available energy sources. Behind the aperture separating regions with a pressure difference of several atmospheres, a supersonic flow with a large temperature drop develops. Based on the Seebeck effect, a thermocouple is placed in these low temperatures to create a thermoelectric voltage. This paper contains a mathematical-physical analysis for proper nozzle design, controlled gas expansion and ideal placement of a thermocouple within the flow for best utilization of the low temperature before a shockwave formation. If the gas flow passes through a perpendicular shockwave, the velocity drops sharply and the gas pressure rises, thereby increasing the temperature. In contrast, with a conical shockwave, such dramatic changes do not occur and the cooling effect is not impaired. This article also contains analyses for proper forming of the head shape of the thermocouple to avoid the formation of a detached shockwave, which causes temperature stagnation resulting in lower thermocouple cooling efficiency.
Keywords:
Peltier–Seebeck effect; Laval nozzle; harvester thermocouple; conical shockwave; perpendicular/detached shockwave; energy harvesting

Just like batteries, compressed air is a secondary energy source. The study of CH. J. Barnhart proves that compressed air is the most efficient regarding energy stored on invested (ESOI) value, which shows the ratio between the amount of energy stored in a secondary energy source and the amount of energy required for its construction [1]. Figure 1 shows the comparison of values of an ESOI of some secondary energy sources.
Gases warm up when compressed and cool when they expand, and these two phenomena are not commonly utilized in practice. As a part of research in the field of vacuum pumping of chambers in an environmental scanning electron microscope (ESEM) through apertures, another study is taking place at Department of Electrical and Electronic Technology at Brno University of Technology with the help of the Institute of Scientific Instruments of the Czech Academy of Science. It is focused on utilizing the rapid temperature drop within a supersonic air flow behind a nozzle to create a thermoelectric voltage using the Seebeck effect.

To utilize the Seebeck effect, the cold side of a set of thermocouples was placed into the flow to greatly cool them, and the warm side of the thermocouples was put into a gas reservoir containing a pressurized gas at room temperature. On the contrary, when filling and pressurizing the reservoir with a gas using a closed nozzle in the chamber, the warm side of the thermocouple was warmed up by the incoming gas and the cold side behind a closed aperture was at room temperature.

The experimental chamber consisted of two chambers separated with a small aperture, simulating the differential pumping of gas within an ESEM. The experimental chamber also contained an interchangeable part separating the two inner chambers, allowing us to change the size and shape of the aperture, and a sliding holder for mounting different sensors and devices, as shown on Figure 2.
To research the possibility of using the Seebeck effect, a theoretical analysis and mathematical-physical analysis were necessary to find the right aperture dimensions and electrode shape.
Figure 3 shows the layout of inner chambers V1 and V2 separated with a nozzle as used for calculations in the Ansys Fluent system. The whole simulation was calculated as a 2D axisymmetric. Air was used in the analyses.
Mathematical-physical analyses in the Ansys Fluent system, where the pressure-based solver setting with second-order discretization was used, showed the following pressure and temperature waveforms as a function of time. These calculations were performed as 2D axisymmetric time variable calculations.
Boundary conditions are described in Figure 3. The mesh was formed from hexagon elements of 0.5 mm in size in rectangular sections. The narrowing region with aperture was created from triangular elements with a gradual refinement, a growth rate of 1.05 to an element size of 0.01 mm in the aperture region, and the region of supersonic flow behind the aperture. Monitor check convergence absolute criteria were set to 0.001 for continuity and velocity. The value for energy was set to 1 × 10−6.
In the first experiment, supersonic flow with velocity Mv = 2.6 was used.
The experimental chamber construction comes from the physical theory of isentropic one-dimensional flow.
Relationships set the ratios of pressures, densities, velocity, and Mach number between the area of nozzle input, in the nozzle and within the computational cross-section of the gas expansion behind the nozzle [2].
For isentropic flow, the following relationships apply: where po is the input pressure, pv is the output pressure, To is the input temperature, Tv is the output temperature, vo is the input velocity, vv is the output velocity, vkr is the critical velocity, ρo is the input density, ρv is the output density, M is the Mach number, is the gas constant = 1.4, A is the computational cross-section and Akr is the critical cross-section.
In order to achieve a supersonic flow with velocity Mv = 2.6 behind the nozzle, a ratio between pv and po needs to be 1:4 according to Equation (4). Considering the output pressure behind the nozzle will be 1 atm, the chamber before the nozzle should be pressurized to 4 atm or more precisely 371,971 Pa [3].
The designed nozzle diameter was 1.5 mm, with 0.5 mm length and opening angle 12° according to Daněk [4]. The next step was to calculate the appropriate shape and spot to place the probe with the thermocouple system [5,6], which is crucial to maximize the utilization of the cryogenic temperature within the supersonic flow [7,8,9,10].
This cryogenic temperature is based on the energy equation: where e is energy, v is flow velocity, cp is heat capacity at constant pressure, T is temperature of the gas flow.
The equation gives the so-called temperature parabola (Figure 4), which determines the dependence in which the temperature of the gas decreases with accelerating flow.
In the temperature parabola, Sz denotes the decelerated state where the velocity is zero, Skr is the critical state where the velocity reaches Vkr at the narrowest point in the nozzle, and Sm denotes the limit state where the velocity reaches a theoretical maximum that cannot occur in practice. The temperature at that point would reach 0 K.
In our case, with the probe placed as described, we were operating in the region between Skr and Sm.

This research was funded by Grant Agency of the Czech Republic, grant number GA 19-03909S.

This research was supported by Brno University of Technology specific research programme: Materials and Technology pro Electrotechnics IV, reg. no. FEKT-S-20-6206 and by the Grant Agency of the Czech Republic project: GA 19-03909S. 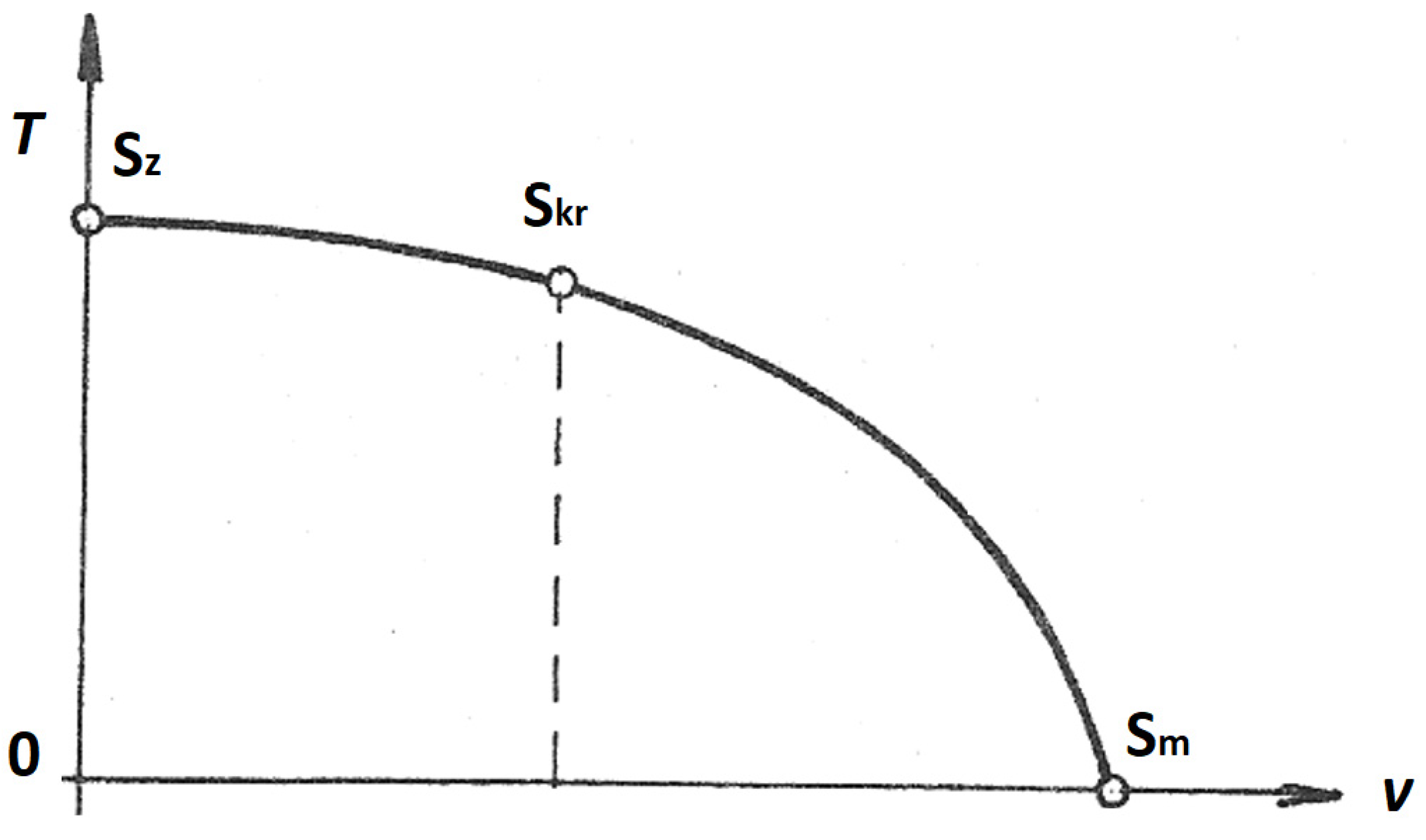 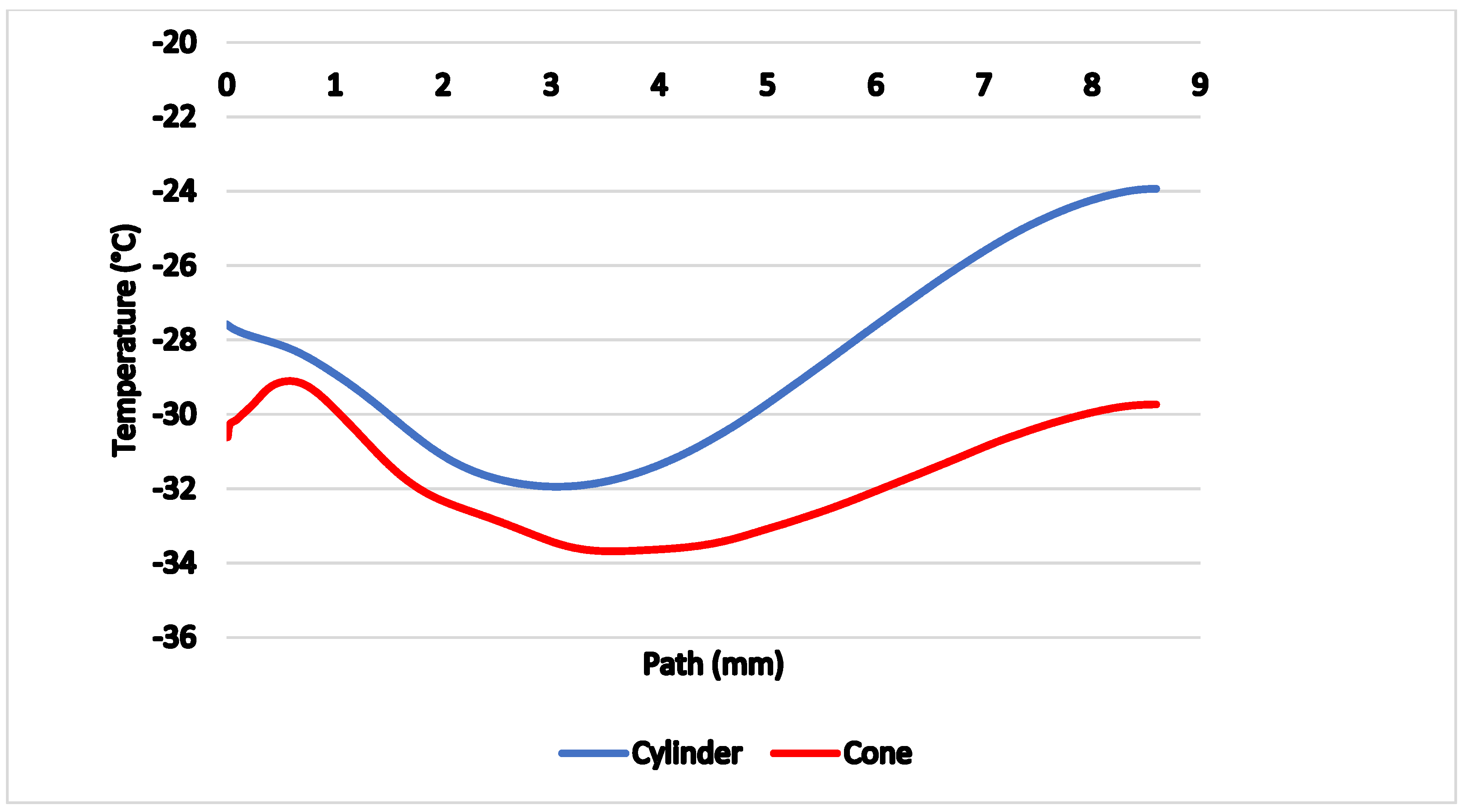 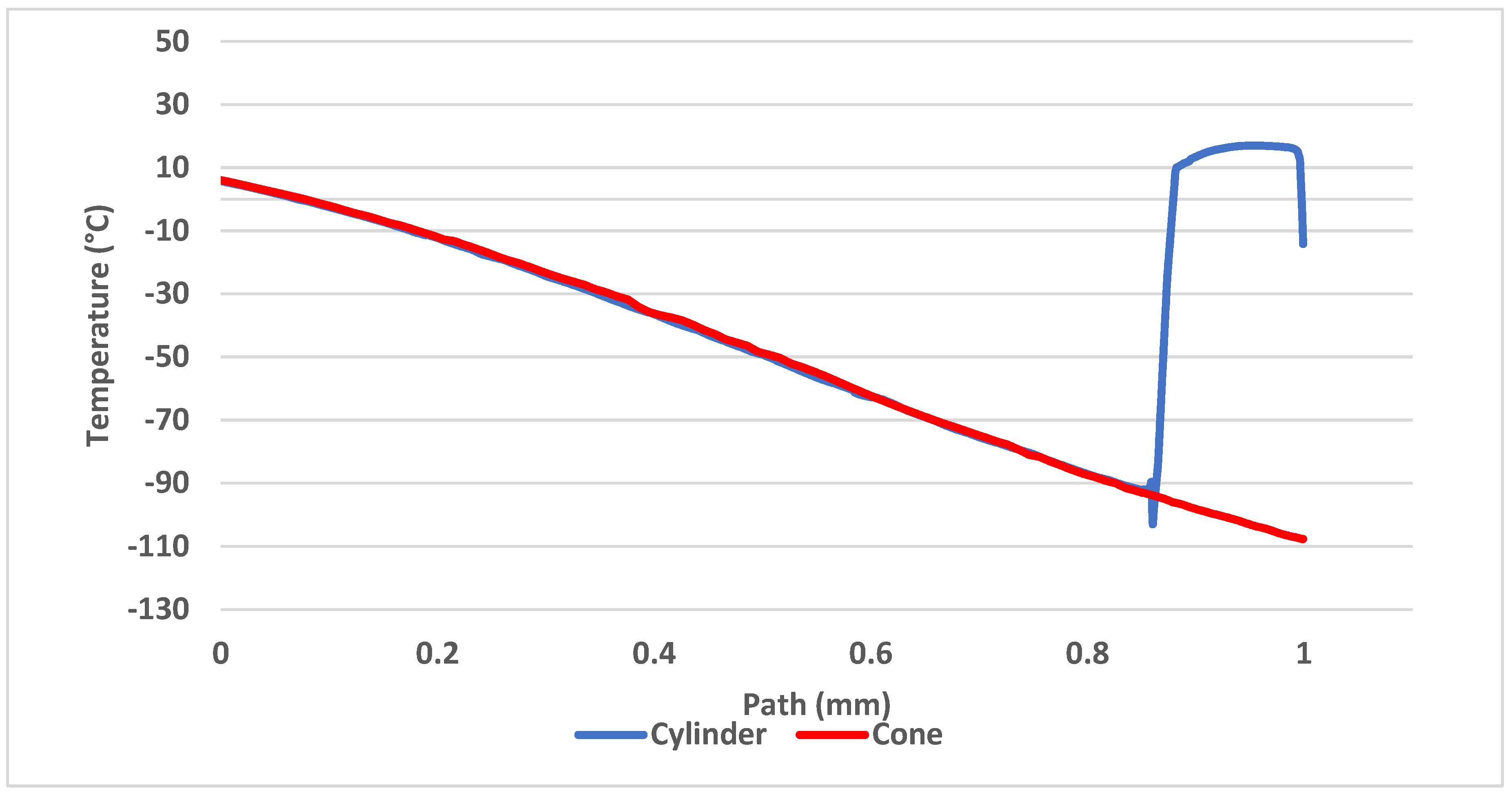