The Stream Exchange Protocol: A Secure and Lightweight Tool for Decentralized Connection Establishment

In this paper a Bayesian method is proposed to estimate dynamic origin–destination (O–D) demand. The proposed method can synthesize multiple sources of data collected by various sensors, including link counts, turning movements at intersections, flows, and travel times on partial paths. Time-dependent demand for each O–D pair at each departure time is assumed to satisfy the normal distribution. The connections among multiple sources of field data and O–D demands for all departure times are established by their variance-covariance matrices. Given the prior distribution of dynamic O–D demands, the posterior distribution is developed by updating the traffic count information. Then, based on the posterior distribution, both point estimation and the corresponding confidence intervals of O–D demand variables are estimated. Further, a stepwise algorithm that can avoid matrix inversion, in which traffic counts are updated one by one, is proposed. Finally, a numerical example is conducted on Nguyen–Dupuis network to demonstrate the effectiveness of the proposed Bayesian method and solution algorithm. Results show that the total O–D variance is decreasing with each added traffic count, implying that updating traffic counts reduces O–D demand uncertainty. Using the proposed method, both total error and source-specific errors between estimated and observed traffic counts decrease by iteration. Specifically, using 52 multiple sources of traffic counts, the relative errors of almost 50% traffic counts are less than 5%, the relative errors of 85% traffic counts are less than 10%, the total error between the estimated and “true” O–D demands is relatively small, and the O–D demand estimation accuracy can be improved by using more traffic counts. It concludes that the proposed Bayesian method can effectively synthesize multiple sources of data and estimate dynamic O–D demands with fine accuracy. View Full-Text
Keywords: dynamic O–D estimation; Bayesian statistic; synthesizing data; stepwise algorithm dynamic O–D estimation; Bayesian statistic; synthesizing data; stepwise algorithm
►▼ Show Figures 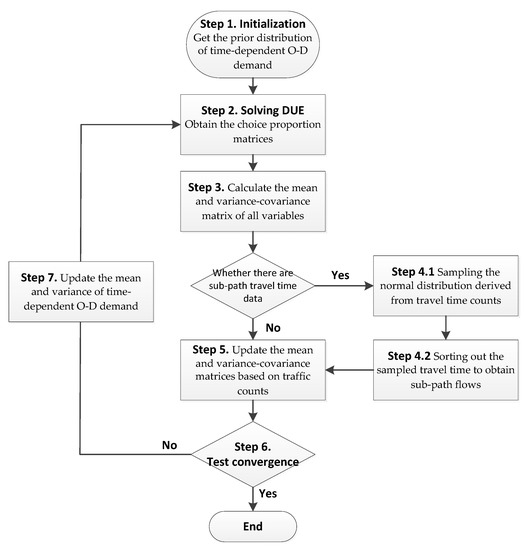