2.1. Design of the Fibre-Optic Based Sensing Structure

The prototype fibre-optic sensor array used in this study consists of eight FBG sensors which had center wavelengths of 1518 nm, 1527 nm, 1536 nm, 1545 nm, 1554 nm, 1562 nm, 1572 nm, 1581 nm respectively. The FBGs are femtosecond-written in a bend insensitive optical fibre with polyimide coating (SM1250BI, Fibercore, Southampton, UK). Polyimide coating was chosen as such coating will not exhibit any strain loss due to slippage between the coating and cladding [28]. All the FBGs have a length of 3 mm and the reflectivity above 40%.
The sensor array was secured to a self-adhesive polydimethylsiloxane (PDMS) gel membrane using a Scotch magic tape (3M, Saint Paul, MN, USA) as illustrated in Figure 1.
The membrane substrate was made from a skin-safe PDMS gel (Platsil® gel 10, Polytek® Development Corp., Easton, PA, USA) prepared according to the methods reported by Arm et al. [29] using commercially available liquid and fibre additives. The same methods and materials were used to create the composite elastomer membranes for these experiments because they have been shown to mimic the Young’ s modulus of human skin [29].
The change in the initial grating period of the FBG is inversely proportional to the Young’s modulus of the supporting structure, as suggested by Equation (4) in [30]. Therefore, to get the optimized sensitivity to the fetal movement, it is preferred to use a supporting structure with a relatively small Young’s modulus. The membrane used in this experiment exhibits an elastic Young’s modulus of 0.22 MPa (±0.1 MPa), where the literature reports that human skin has a wide-ranging modulus across the body, ranging between 0.014 MPa and 0.6 MPa [31,32].
The self-adhesive nature of the composite membrane allowed for a safe, secure, but temporary bond to each volunteers’ skin while gathering data. The soft, elastic modulus of the membrane also ensured unencumbered soft-tissue mobility in all volunteers throughout the experiment, whilst ensuring the sensors remained in place.

During a fetal movement instance, the FBG secured membrane experiences stress both along the longitudinal direction and in the perpendicular direction to the optical fibre. The strain sensitivity of the FBG along optical fibre is about 1.2 pm/µε as suggested by Surre et al. [33]. The sensitivity of the FBGs secured on the PDMS gel membrane to the force applied perpendicular to the membrane was tested using a mechanical test instrument (ElectroForce 3200, TA Instruments, New Castle, DE, USA). A compression force was applied using a compression plate to a membrane patch of 22 mm (length) × 22 mm (width) × 4 mm (thickness), as shown in Figure 2. A ramp force with a rate of 0.1 mm/s and the maximum displacement of 3 mm was applied. The load and the displacement of the mechanical tester were recorded with a sampling frequency of 50 points per second. The Bragg wavelengths of the FBG were recorded by the interrogator simultaneously. The data from the mechanical tester and the interrogator were synchronized using the time labels.

A total of seven examinations on three volunteers, all with singleton pregnancies were obtained. The gestational weeks for the three volunteers when performing the tests were 28, 28 and 34 weeks respectively. Six examinations on two non-pregnant women were also performed as a comparison. All volunteers gave their informed consent for inclusion before they participated in the study. The study was conducted in accordance with the Declaration of Helsinki, and the protocol was approved by the Research Ethics Committee at Nottingham Trent University on 30 October 2019 (Project identification code: 609).
The sensing membrane was gently applied onto the volunteer’s bare abdomen as shown in Figure 3 with the sensors applied to the inner, self-adhesive surface. In this way, the FBG sensors were sandwiched between the membrane and the volunteer’s abdominal skin. The experimental setup is shown in Figure 4.
The FBG sensor was connected to an FBG interrogator (SwitchedGator, Technobis, Alkmaar, The Netherlands). The interrogator was connected to a laptop with a USB connection for data acquisition, logging and visualization and the data was received at 19.23 kHz. Data was logged every 5.2 milliseconds, with the system calculating the average output after every 100 samples.
In order to check recording of the volunteer’s perception, a switch was developed in LabVIEW 2019 (National Instruments, Austin, TX, USA). The volunteer was asked to press the switch by left clicking a mouse each time she felt any fetal movement. The interface of the switch would display a base signal without interaction, and if pressed, it would display a high-level signal. Therefore, the clicks of the volunteer were registered by the system. Switch data was synchronised with the data acquisition from the interrogator.
It has been reported that the greatest number of fetal movements are noted when the mother is lying down [34]. During the test, subjects were placed in a semi-recumbent position to avoid aortocaval compression, as shown in Figure 4. Since the body temperature is much higher than room temperature, the Bragg wavelength signals from the FBGs would increase once applied on the skin. Therefore, before the data recording started, the volunteer was asked to relax and wait for the signals of the FBGs to stabilise. The subjects were asked to lie motionlessly but keep breathing normally. During the measurements if the mother coughed or sneezed, the time this happened would be noted down and the corresponding data would be removed and not counted. No external disturbances were introduced to the measurement system by any means during the test. Each individual test was conducted for ten minutes.
The Bragg wavelength is affected by both the temperature and the strain [27]. When the sensor is attached to the abdomen, it detects lengths changes of the optical fibre and temperature fluctuations in units of wavelength with the interrogator reading the temporal signals of Bragg wavelength. As mentioned earlier, the measurements were started when the detected Bragg wavelength has been stablise indicating the sensor has the same temperature as that of the abdomen skin. In this way the effect of the temperature can be minimised. When the volunteer breathes, a rhythmic wave pattern of wavelength change can be observed. Fetal movement can introduce a distortion by superposing an intensity change over this breathing pattern. Therefore, any distortion on the wavelength pattern is considered as fetal movement.

The results for the compression tests are shown in Figure 5. The Bragg wavelengths against the loads and the displacements are shown in Figure 5a,b, respectively. It can be seen from Figure 5a that in the range between 4.6 N and 250 N, there is a linear relationship between the Bragg wavelength and the load, and the compression sensitivity is 0.94 pm/N. The slight decrease of the Bragg wavelength of 0.01 nm once the load was applied until it reached 4.6 N is probably due to the bending of the FBG on the soft PDMS structure. A quadratic fitting was applied to express the relationship between the Bragg wavelength and the displacement.
Figure 6 shows the typical breathing signal observed from one FBG sensor when worn by a pregnant volunteer. A clear rhythmic wave pattern was observed. Peaks identify the end of maternal inspiration, whereas troughs identify the end of breathing expiration, illustrating typical respiratory behavior [39,40]. With the subject in rest and the measurement uninterrupted by external/internal triggers, a very rhythmic breathing signal was observed. A fetal movement inside the uterus can make the pattern became distorted. Exemplary distortions on the breathing pattern are shown in Figure 7.
Figure 8 shows exemplary distortions induced by the fetus at 438 s over all eight sensors during a 30 s measurement window on a pregnant volunteer. During the fetal movement, the breathing signal was interrupted by a distortion in the wavelength causing a sharp peak influenced by the movement. Corresponding ICA data with the breathing signals removed is shown in Figure 9. A clear signal at 437–438 s can be observed indicating a fetus movement. The time when the fetus movement was detected correlates well with mother’s perception, which is indicated by the right y axis.
It was found that some fetal movements indicated by distortions of the breathing signal or peaks in the ICA data were missed by the mother. One example has been shown in Figure 10 (raw data) and Figure 11 (ICA data). During this 60-s test, there were two movements recorded by both the sensing system and the mother, which were at 191–199 s and 220–225 s respectively. However, all the eight FBG sensors detected another movement at 208–211 s, which was missed by the mother.
Figure 12 compares the number of movements counted using the ICA processed signals and by the volunteers during the 10-min test. Figure 12a,b are examinations on pregnant mothers and non-pregnant women, respectively.

A successful novel technique for fetal movement monitoring has been investigated and demonstrated. The study suggests that the optical fibre sensors are more sensitive than the mother’s perception of fetal movements. This technique provides many advantages over the conventional more sophisticated and expensive techniques, such as the multiplex capability, the minimal size and weight. Future work will include removal of motion artefacts, validation of the prototype using ultrasound imaging, and the categorization of the type of movements. By addressing these constraints, a wearable belt could be developed for continuous monitoring of fetal movements.

The study was conducted according to the guidelines of the Declaration of Helsinki, and approved by the Institutional Review Board (or Ethics Committee) of NAME OF INSTITUTE (protocol code 609 and 3 October 2019).

Informed consent was obtained from all subjects in-volved in the study.

The authors would like to thank Katy Griggs and Yang Wei in the Nottingham Trent University for suggestions on Ethical and funding applications. 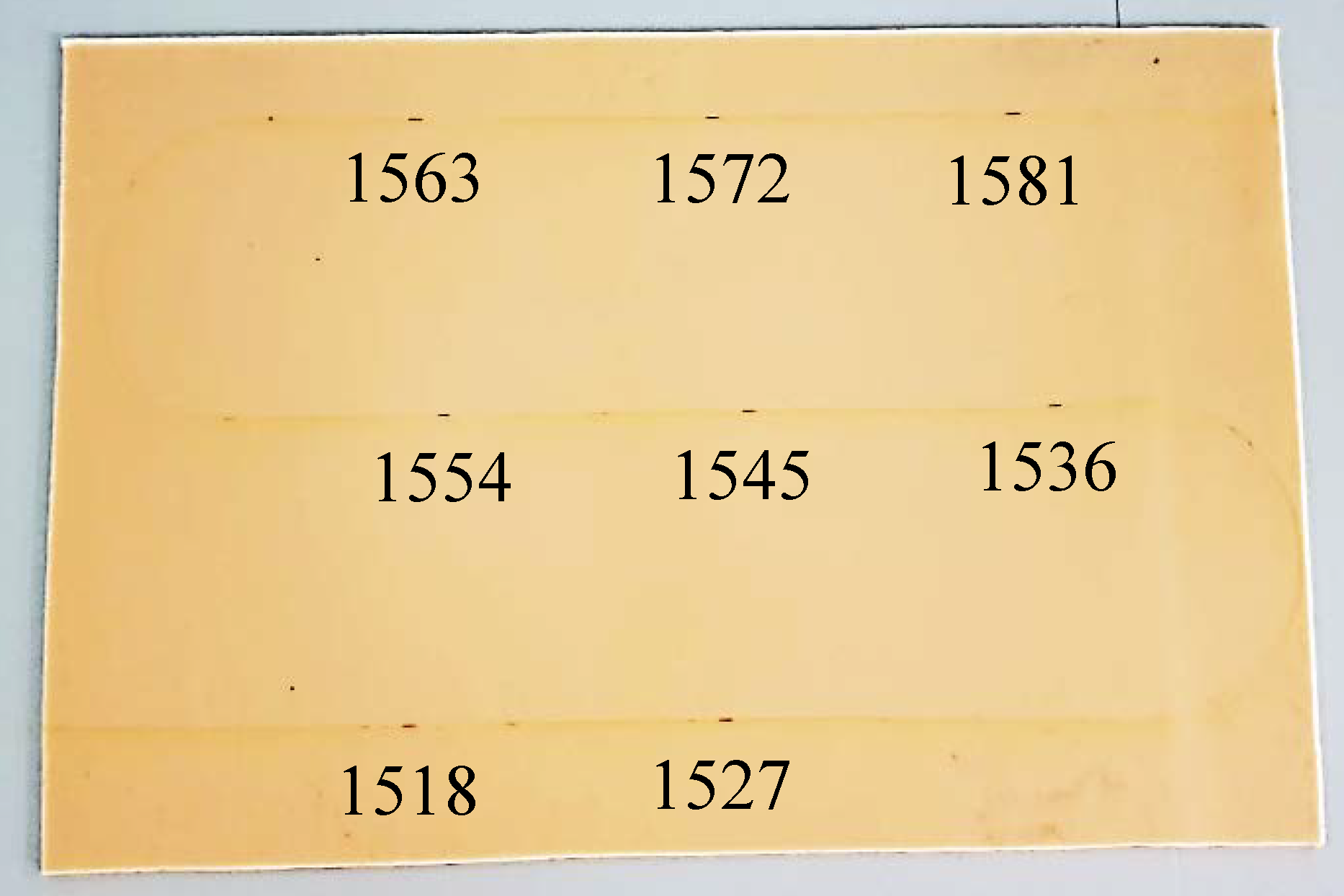 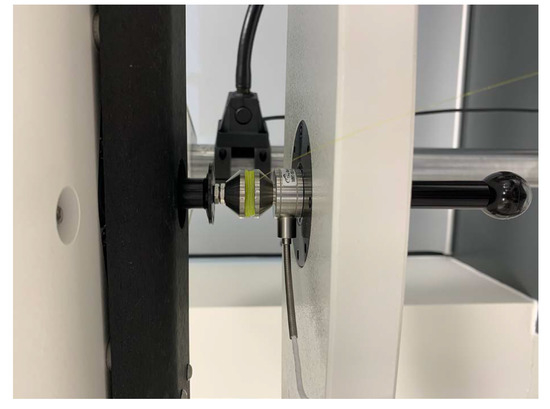 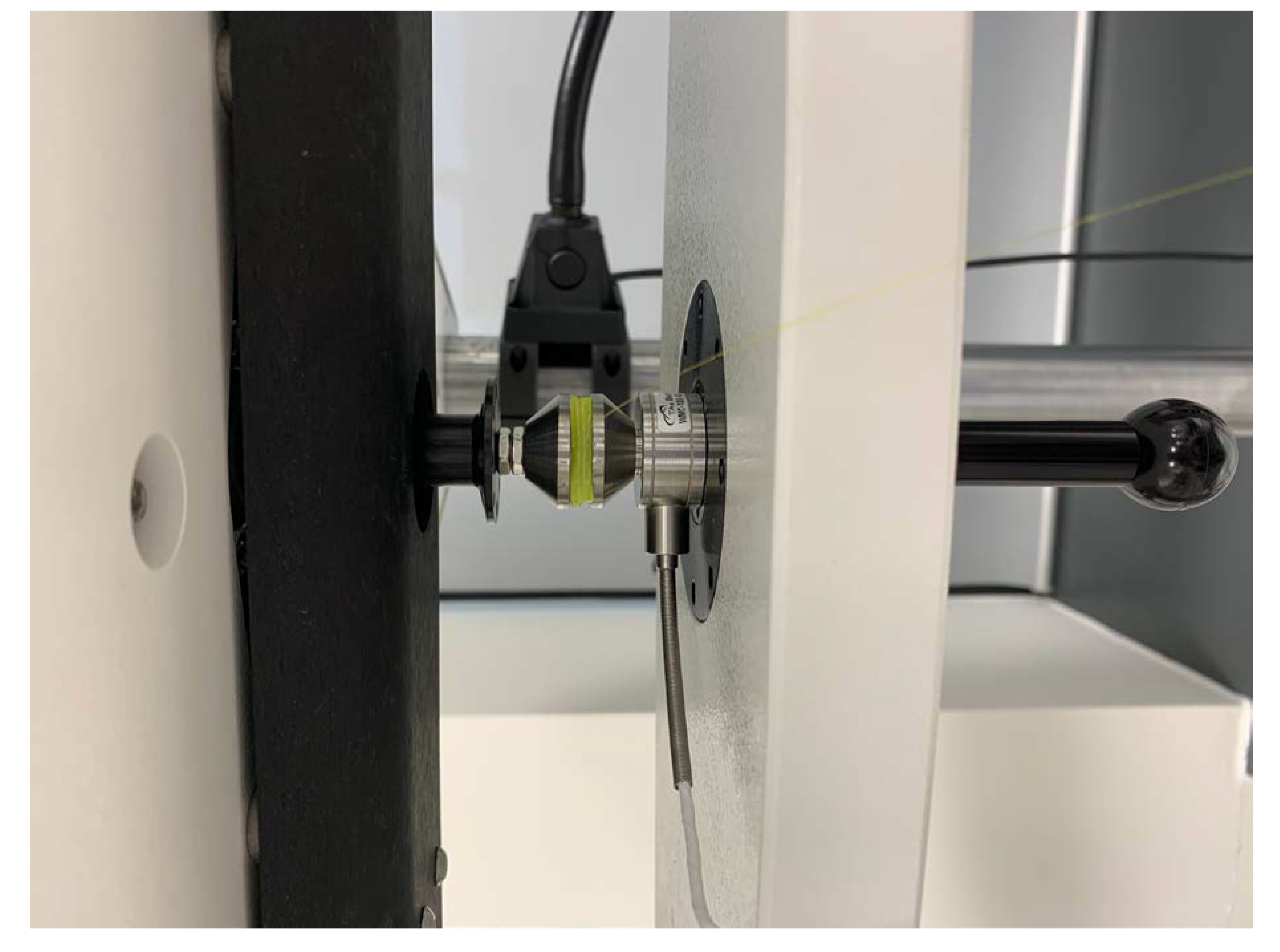 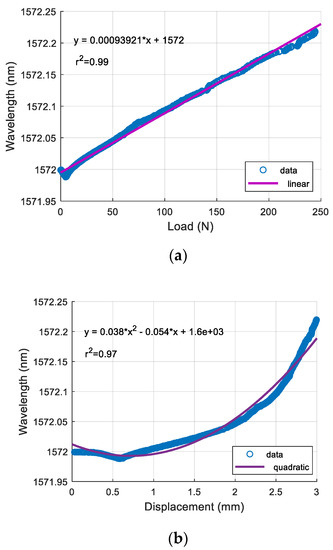 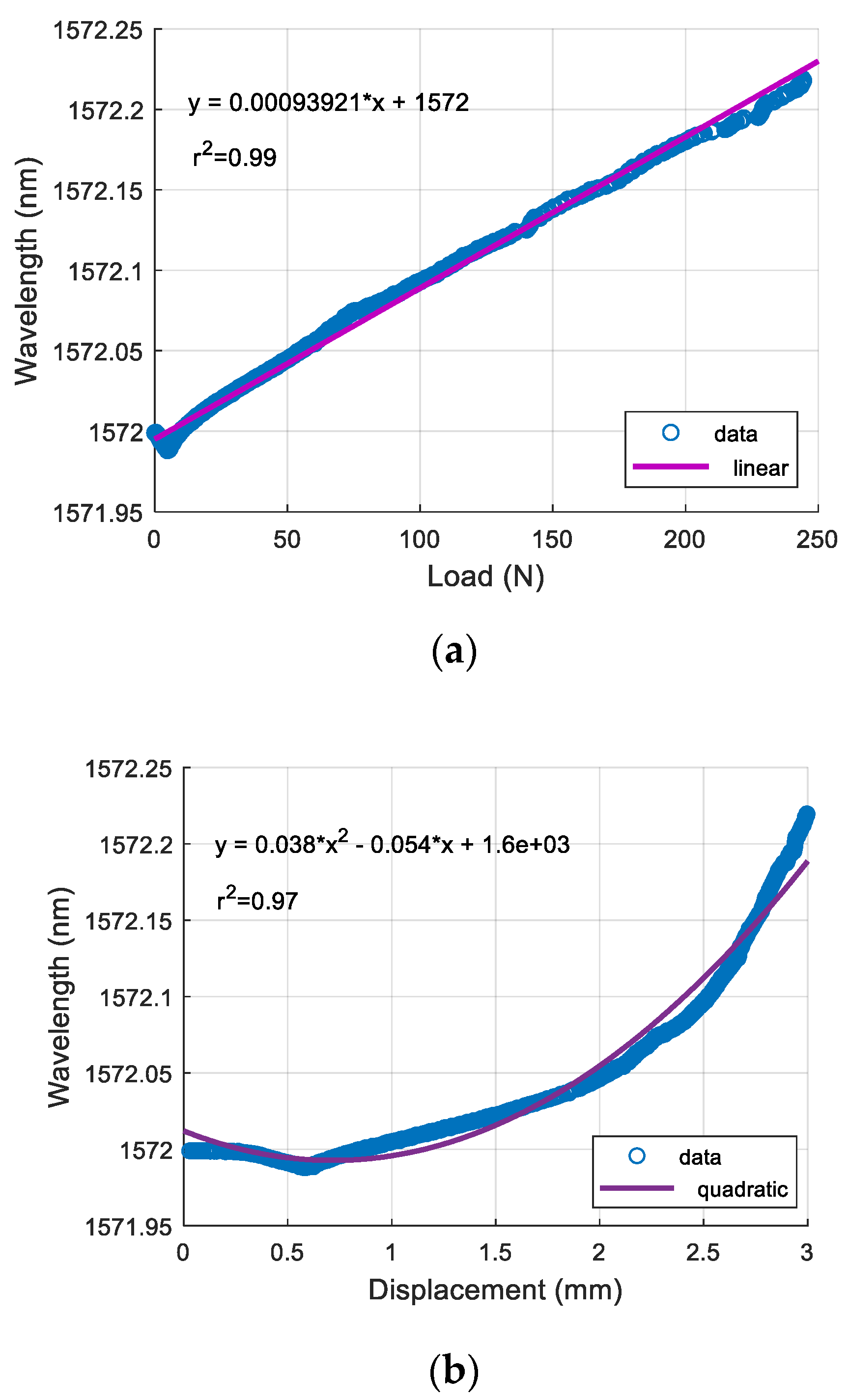 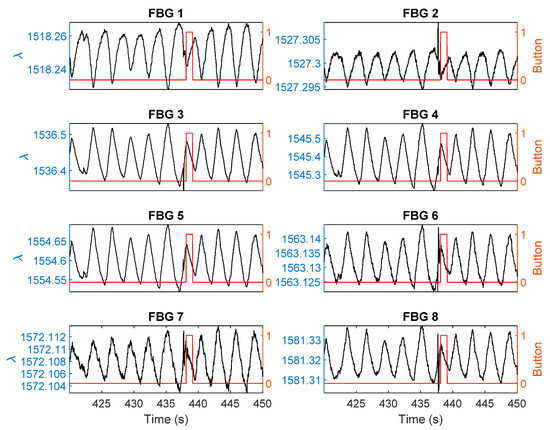 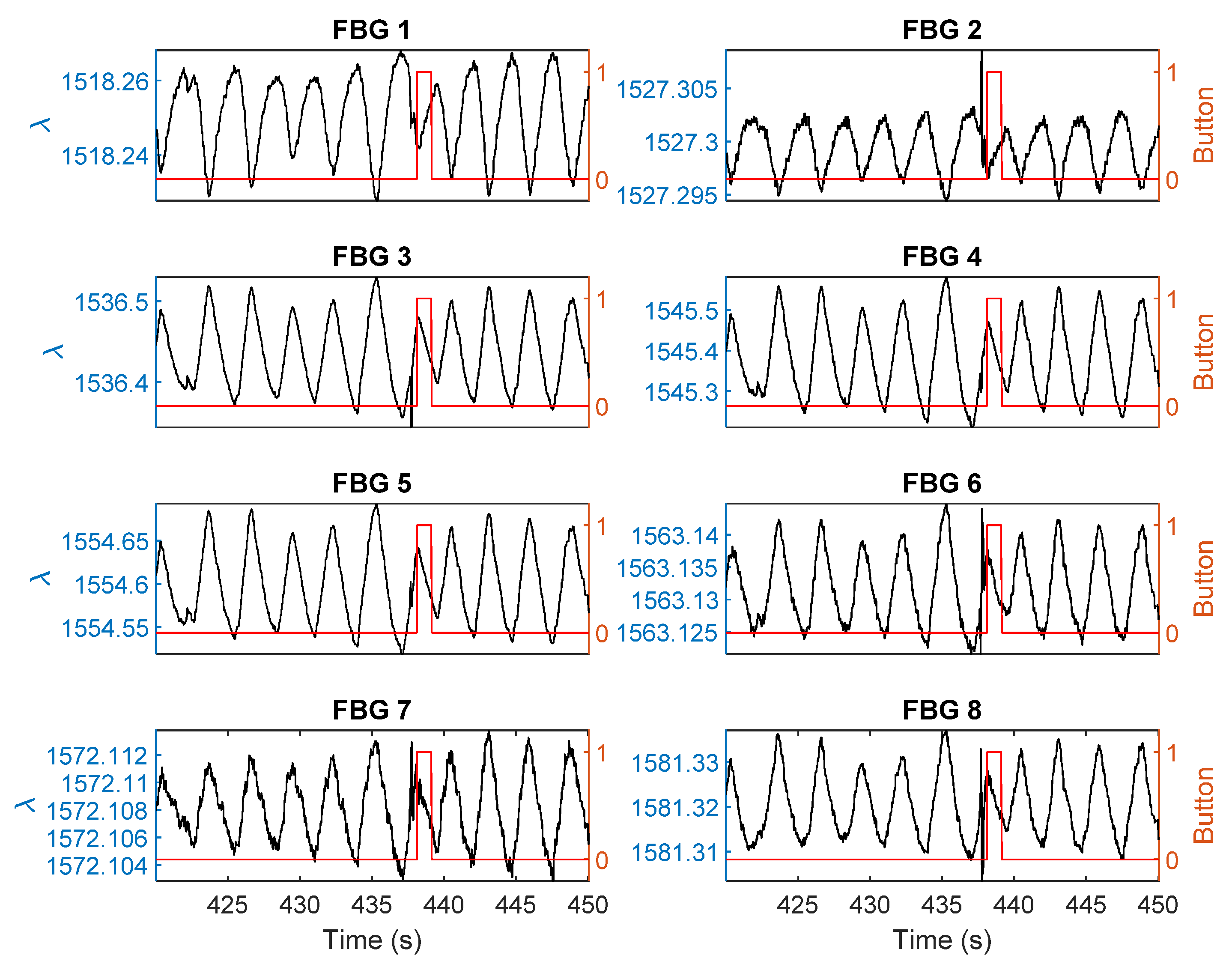 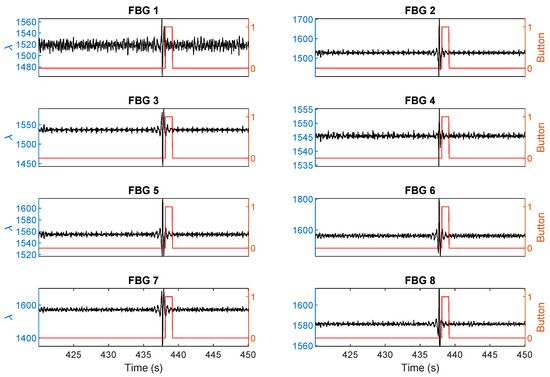 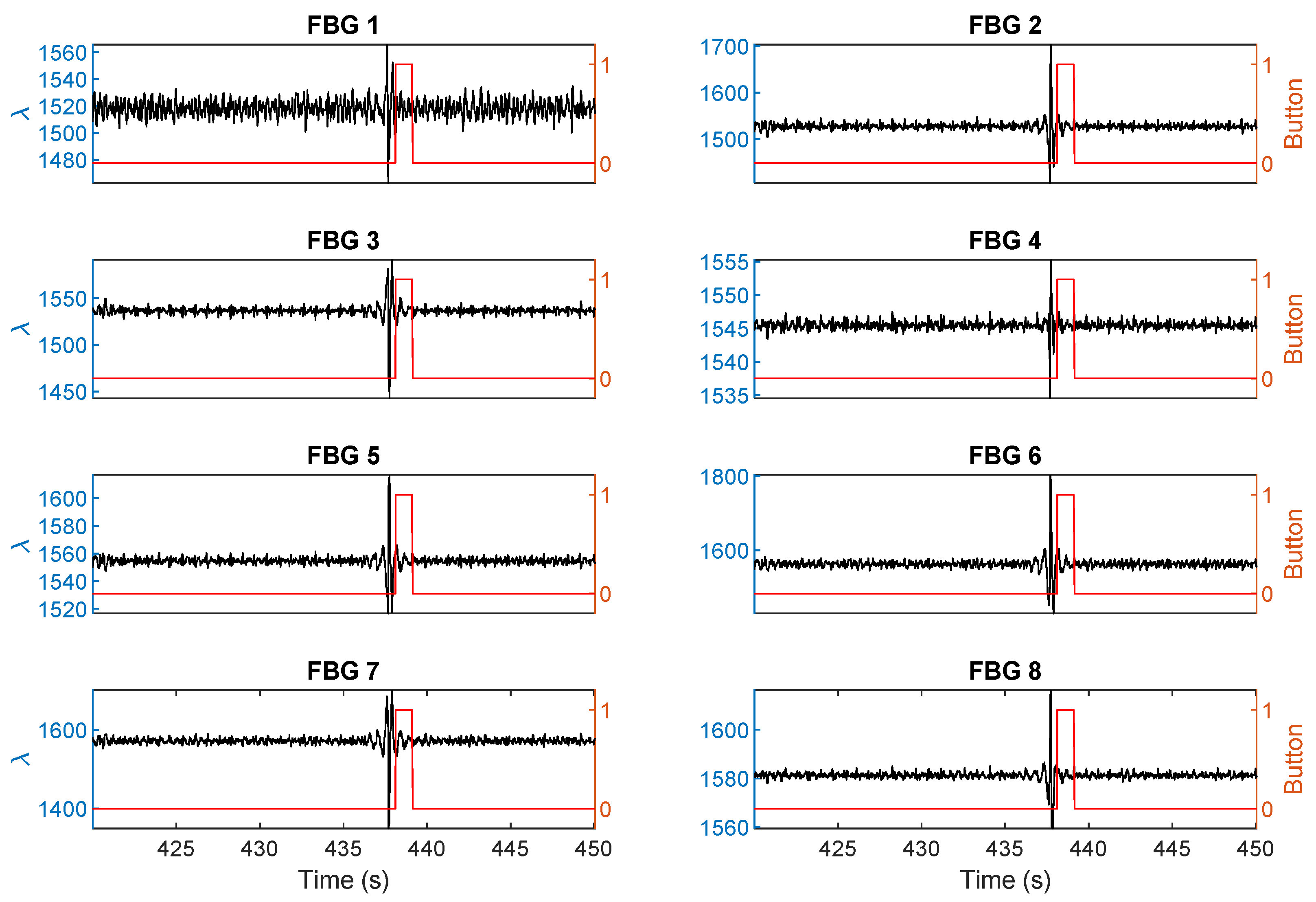 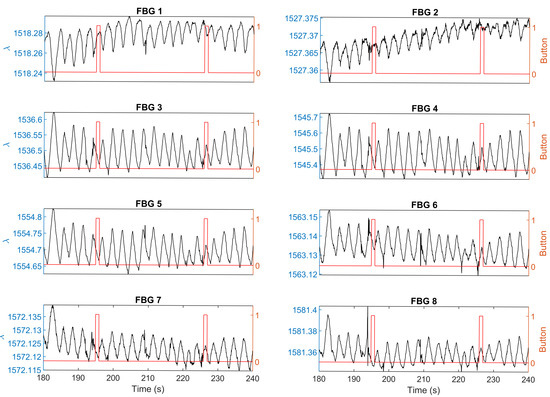 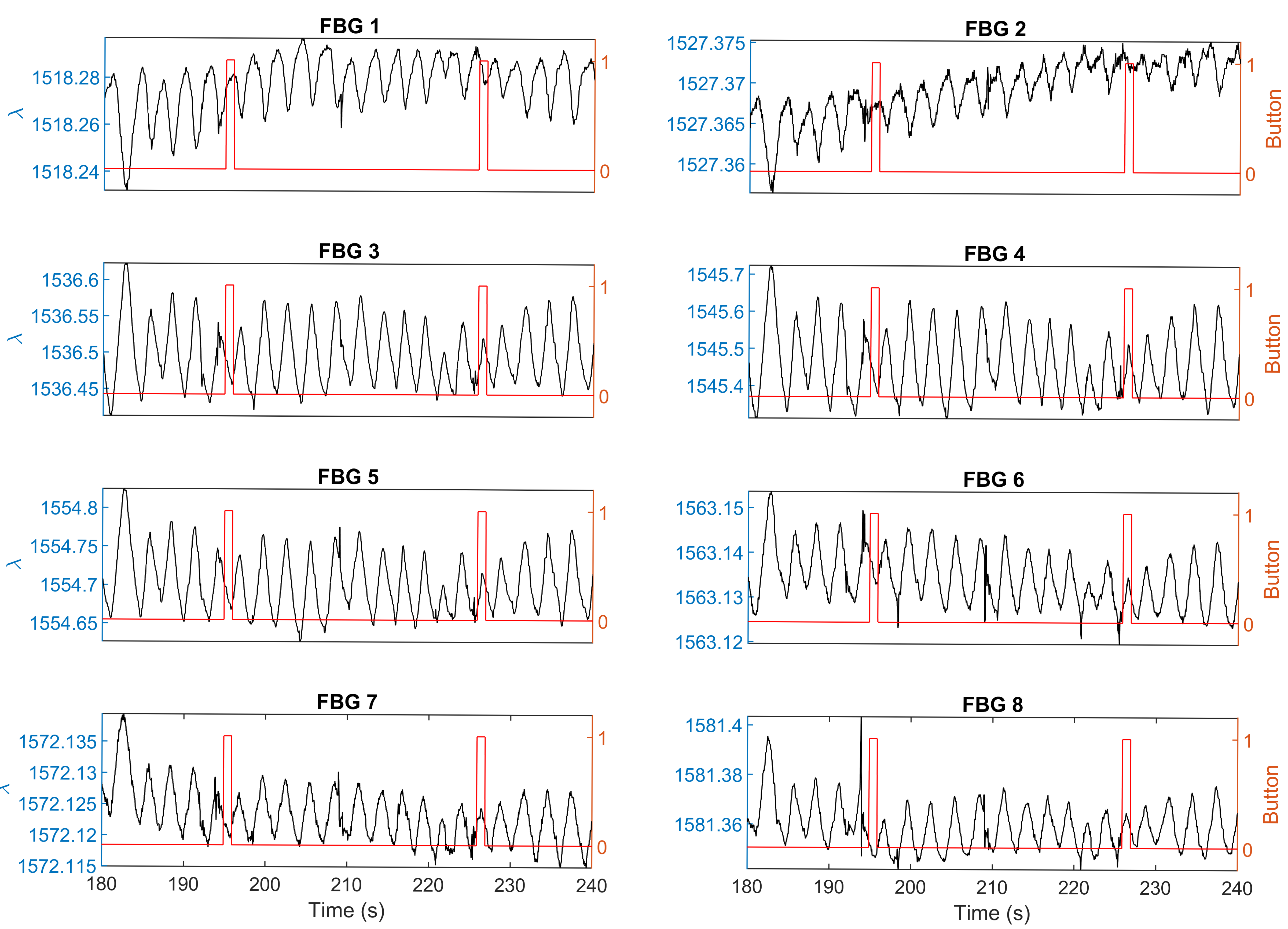 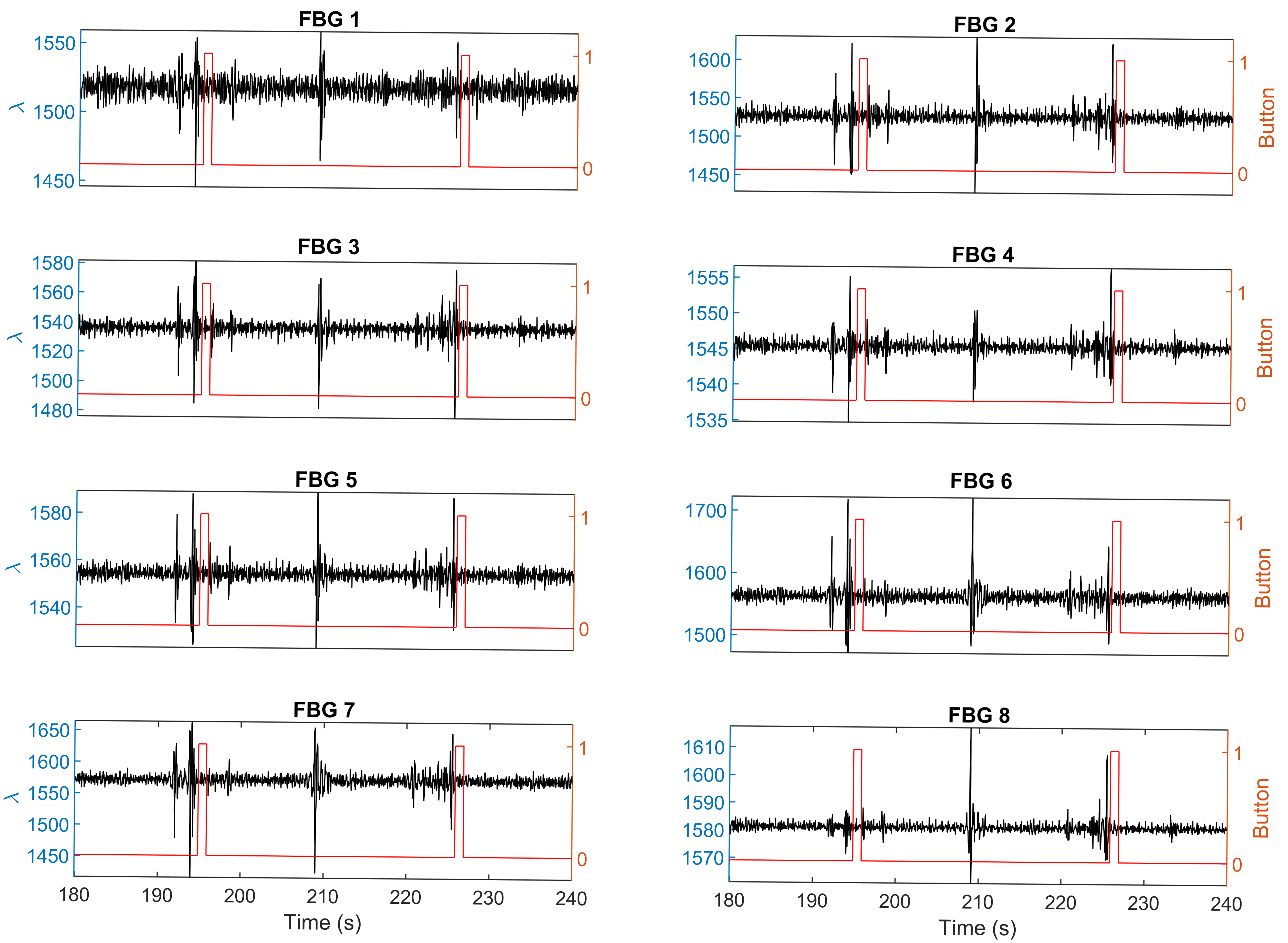