The use of photosystem II (PSII) inhibitors allows simulating cascade of defense and damage responses, including the oxidative stress. In our study, PSII inhibiting herbicide metribuzin was applied to the leaf of the model plant species Chenopodium album. The temporally and spatially resolved cascade of defense responses was studied noninvasively at the leaf level by combining three imaging approaches: Raman spectroscopy as a principal method, corroborated by chlorophyll a fluorescence (ChlF) and infrared thermal imaging. ChlF imaging show time-dependent transport in acropetal direction through veins and increase of area affected by metribuzin and demonstrated the ability to distinguish between fast processes at the level of electron transport (1 − Vj) from slow processes at the level of non-photochemical energy dissipation (NPQ) or maximum efficiency of PSII photochemistry (Fv/Fm). The high-resolution resonance Raman images show zones of local increase of carotenoid signal 72 h after the herbicide application, surrounding the damaged tissue, which points to the activation of defense mechanisms. The shift in the carotenoid band indicates structural changes in carotenoids. Finally, the increase of leaf temperature in the region surrounding the spot of herbicide application and expanding in the direction to the leaf tip proves the metribuzin effect on slow stomata closure. View Full-Text
Keywords: Raman mapping; carotenoids; zeaxanthin; photosynthesis; oxidative stress; xanthophyll cycle; photoinhibition Raman mapping; carotenoids; zeaxanthin; photosynthesis; oxidative stress; xanthophyll cycle; photoinhibition
►▼ Show Figures 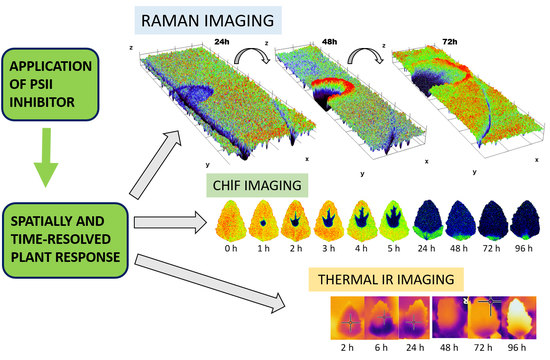