Validation, Reliability, and Responsiveness Outcomes of Kinematic Assessment with an RGB-D Camera to Analyze Movement in Subacute and Chronic Low Back Pain
Next Article in Special Issue

Visual measurement has many advantages, such as high accuracy and a non-contact nature. It is widely used in industrial and military applications and daily life [1,2,3]. According to the different number of cameras used in the measurement process, visual measurement techniques can be generally divided into monocular vision, binocular vision, and multieye vision [4,5,6].
Monocular vision has the problem of scale ambiguity. In the process of solving the corresponding points in the monocular visual image, the fundamental matrix or the homography matrix lacks the depth constraint in the decomposition and cannot determine the proportional coefficient [7]. Compared with monocular vision, stereo vision consists of two or more fixed vision sensors that collect target data simultaneously. By establishing the correspondence between views, the scale information can be estimated quickly, and then the depth recovery and the reconstruction and pose estimation of the target can be realized in the Euclidean space. In reference [8], the three-dimensional coordinates of the moving object are obtained by two cameras that measure the spatial constraints of the same spatial point between different image planes. After the 3D a reconstruction of single acquisition, the absolute orientation of the two acquisition point clouds is solved to achieve the target pose estimation and point cloud fusion. Terui. F et al. [9] used binocular vision to estimate the pose of a known semi-cooperative target and verified its effectiveness in a ground test. However, this method is computationally complex and needs to be processed offline. Du. X et al. [10] explored the feasibility of binocular vision to measure non-cooperative targets with the support of European Space Agency, and then Segal et al. [11] extended the method to discrete multi-objective feature recognition and matching. The Bayer and Kalman filtering algorithms are used to improve the pose estimation accuracy of moving targets. Engel et al. [12] extended binocular vision to simultaneous localization and mapping (SLAM) and implemented a fast initialization of the direct method. In addition, the calibration accuracy determines the measurement accuracy for a binocular vision sensor. J. Apolinar Muñoz Rodríguez [13] proposed a technique to perform microscope self-calibration via micro laser line and soft computing algorithms. In this technique, the microscope vision parameters are computed by means of soft computing algorithms based on laser line projection.
In engineering practice, due to the limitations of a single sensor, target measurement technology based on multisensor information fusion with high-precision and high-robustness has become the main method to make up for the shortcoming of a single sensor [14]. Multisensor information fusion (MSIF), which appeared in the late 1970s, is widely used in target tracking and image and signal processing [15,16,17]. MSIF is a method for improving the adaptability and measurement accuracy of the system by integrating the correlation of each sensor in the same scene.
Based on the fusion of vision and inertial measurement unit (IMU), Leutenegger. S et al. [18] integrated the IMU error into the reprojection error cost function to construct a nonlinear error function, and maintained a fixed optimization window through marginalization to ensure the real-time performance of the process. Forster C et al. [19] proposed a preintegration theory that aggregates the inertial measurements of adjacent keyframes into independent motion constraints and fuses them into a factor graph framework. For the fusion of vision and Lidar, Tomic T et al. [20] used a multihead camera and point cloud registration to jointly estimate the motion state of the drone, and they used the map pyramid to improve the efficiency of the algorithm to achieve real-time performance. Zhang J et al. [21] proposed the depth-enhanced monocular odometry (DEMO) method based on positioning and reconstruction of the camera and 3D lidar. Vision sensors can also be used with sonic sensors for automatic parking, and with computed tomography (CT) images for medical diagnosis, with infrared sensors for target tracking, among other applications. For the fusion of vision and laser. J. Apolinar Muñoz Rodríguez and Francisco Carlos Mejía Alanís [22] proposed an accurate technique to perform binocular self-calibration by means of an adaptive genetic algorithm based on a laser line. In this calibration, the genetic algorithm computes the vision parameters through simulated binary crossover (SBX).
In this paper, we propose a method for correcting the distance of binocular vision along the optical axis with a one-dimensional point laser ranging sensor that is installed on a two-dimensional turntable firstly. Limited by the mechanical structure of the two-dimensional turntable in the actual measurement process, the measurement frequency of the laser ranging sensor is lower than that of the binocular vision sensor, resulting in time-delay and redundancy of the measurement information of the entire system. Second, we propose a direct update algorithm based on one-step prediction, which transforms the time-delay information into real-time information, and combines the federal Kalman filtering algorithm to complete the positioning and tracking of spatial targets. Finally, the experimental results show that the system structure and algorithm that we proposed can effectively improve the accuracy and real-time performance of the multisensor system. It should be noted that the parameters of the binocular vision sensor used in this paper are obtained after image processing. Image processing such as camera calibration, distortion correction, etc. is not the research content of this article.

According to the calculation process of the coordinate , the information flow of the target tracking is shown in Figure 3.
The measured value is obtained by the binocular vision sensor at time . Then, the yaw angle and pitch angle are calculated by coordinate transformation and transferred to the 2D turntable controller. After the turntable is rotated to the corresponding angle, the laser-ranging sensor is tested and the corrected coordinate value at time is calculated. Since the frequency of mechanical rotation of the 2D turntable is much lower than the measurement frequency of the binocular vision sensor, the measured value is obtained by the binocular vision sensor at time .
From the process of constructing the system and the acquisition of the target space position, the measurement information of the binocular vision sensor and that of the laser-ranging sensor are related, and the laser-ranging sensor system has constant time delay.
Consider the following multiple sensors system with observing time-delay: where, , in which is the observation delay of the ith local sensor; is the state vector of system at time , is the dimensional state-transitional matrix. is the dimensional noise input matrix. is the m-dimensional measured vector of the ith sensor, and is the number of sensors. is the measured matrix of the ith sensor. is h-dimensional process noise vector of ith sensor. is the observation noise of the ith sensor.
In the real-time sensor system, at time , the following can be obtained: where is the measurement set of the th sensor at time .
Assume that the lag time of the time-delay sensor (laser ranging sensor) is . There are real-time measurement (binocular vision sensor) and time-delay measurement (laser ranging sensor) in the fusion center at time . We need to use earlier measurements of the time-delay sensor to update the estimation :
Moreover, the estimated value of the time-delay sensor system at time is considered to be the real-time measured value at time . The measured value of all sensors at time are (), where the estimates of and are relevant. To obtain more accurate space coordinates of the target, we need to resolve the above correlation problem and the optimal fusion estimation of the target motion state in the fusion center.

Based on the stochastic linear time-invariant discrete system and the iterated state equation, we can obtain the following:
Namely,
Inserting the above formula into the observation equation,
Assuming ,,
Then the system observation equation is transformed into:
Combined with Equation (15), the time-delay subsensor system has the following optimal Kalman filter and one-step predictor, where, is the innovation. is the innovation variance. is the filter gain. is the filtering error variance matrix. is the one step prediction error variance matrix.

Through theoretical calculations and experimental verifications, the accuracy of binocular vision along the optical axis is improved in this paper. First, regarding the system structure, we propose to use a one-dimensional point laser-ranging sensor to correct the measurement value of the binocular vision sensor along the optical axis. Second, regarding the measurement process, we found that it is limited by the performance of the two-dimensional turntable, the system has time delay. To improve the utilization and real-time performance of the information of the multisensor measurement system, an optimal information fusion algorithm for the multisensor target tracking system characterized by estimation correlation and constant time delay is studied. We propose a method to separate the complex multisensor environment, which first uses the one-time prediction of the constant delay information as the real-time information at the current moment to solve the delay problem, and then uses the federal Kalman filter to address the estimation correlation. Finally, the experimental results verify the validity and accuracy of this method.
Although the research in this article provides a basis for the study of the experimental system in actual environments, the current experimental environment is relatively simple, and the experimental parameters and errors are under control. When the distance between the target and sensor system increases, the visual error will increase, and the laser spot will become larger, which will cause the errors of the laser-ranging sensor to increase. There are still many improvements to be studied.

This research was funded by the Natural Science Basic Research Program of Shaanxi (Program No. 2019JM-468). 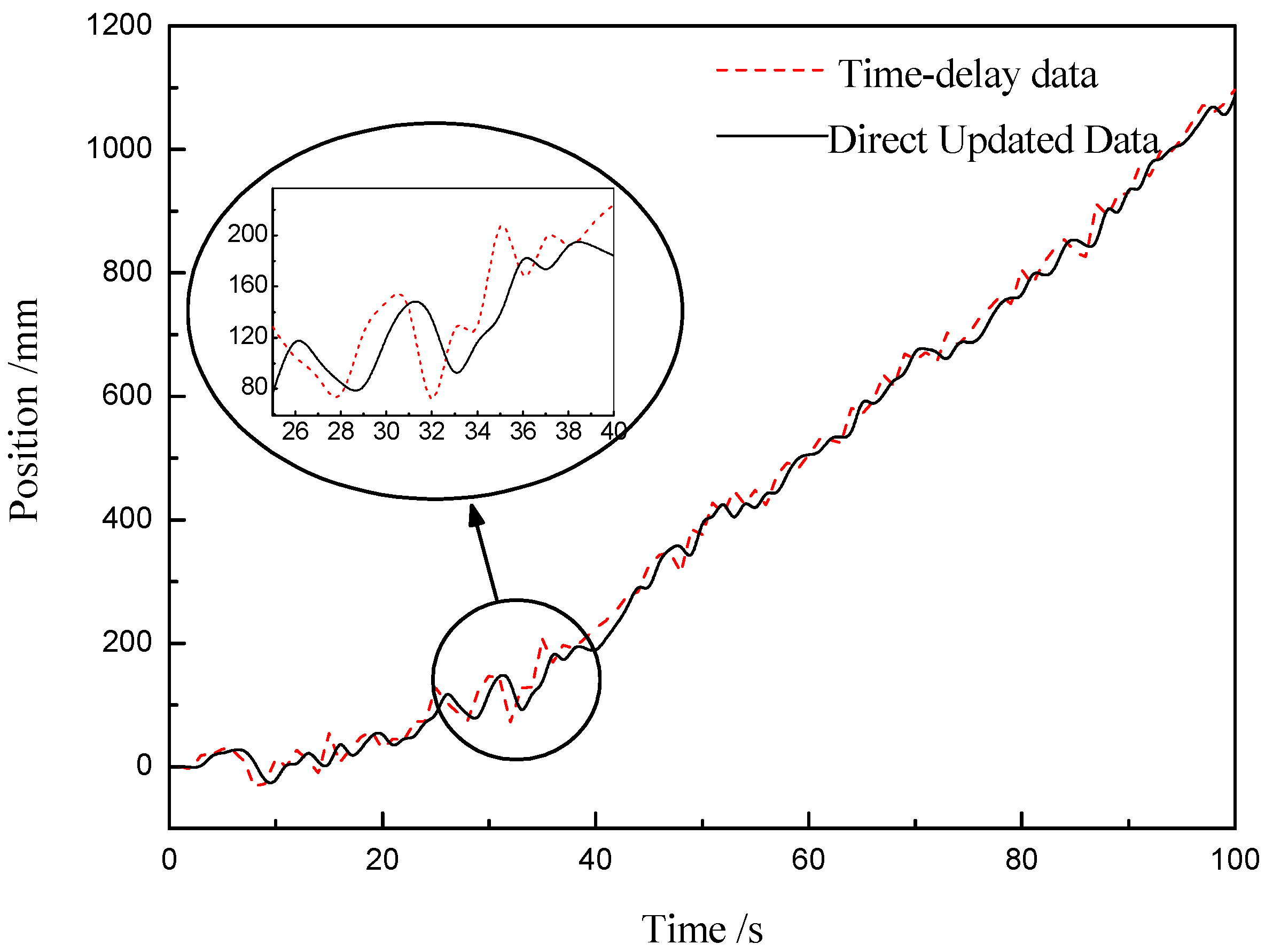 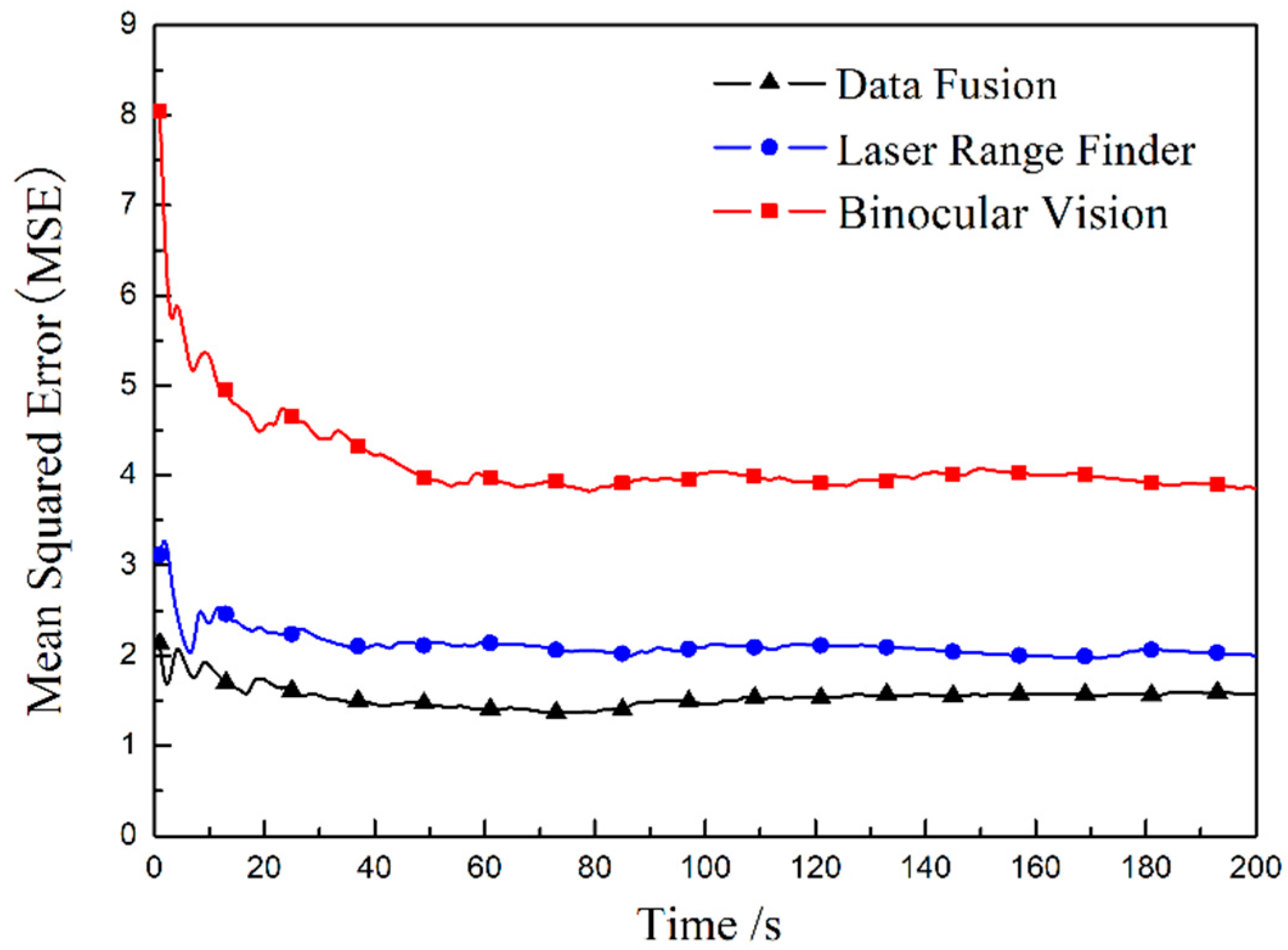 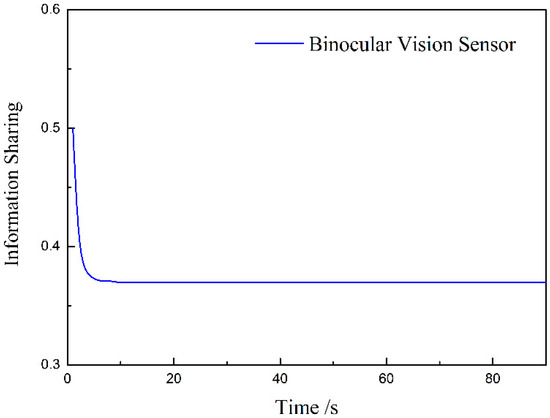