SACT: A New Model of Covert Communication Based on SDN
Next Article in Special Issue

A Case Driven Study of the Use of Time Series Classification for Flexibility in Industry 4.0
Previous Article in Special Issue

Human Action Recognition (HAR) is the classification of an action performed by a human. The goal of this study was to recognize human actions in action video sequences. We present a novel feature descriptor for HAR that involves multiple features and combining them using fusion technique. The major focus of the feature descriptor is to exploits the action dissimilarities. The key contribution of the proposed approach is to built robust features descriptor that can work for underlying video sequences and various classification models. To achieve the objective of the proposed work, HAR has been performed in the following manner. First, moving object detection and segmentation are performed from the background. The features are calculated using the histogram of oriented gradient (HOG) from a segmented moving object. To reduce the feature descriptor size, we take an averaging of the HOG features across non-overlapping video frames. For the frequency domain information we have calculated regional features from the Fourier hog. Moreover, we have also included the velocity and displacement of moving object. Finally, we use fusion technique to combine these features in the proposed work. After a feature descriptor is prepared, it is provided to the classifier. Here, we have used well-known classifiers such as artificial neural networks (ANNs), support vector machine (SVM), multiple kernel learning (MKL), Meta-cognitive Neural Network (McNN), and the late fusion methods. The main objective of the proposed approach is to prepare a robust feature descriptor and to show the diversity of our feature descriptor. Though we are using five different classifiers, our feature descriptor performs relatively well across the various classifiers. The proposed approach is performed and compared with the state-of-the-art methods for action recognition on two publicly available benchmark datasets (KTH and Weizmann) and for cross-validation on the UCF11 dataset, HMDB51 dataset, and UCF101 dataset. Results of the control experiments, such as a change in the SVM classifier and the effects of the second hidden layer in ANN, are also reported. The results demonstrate that the proposed method performs reasonably compared with the majority of existing state-of-the-art methods, including the convolutional neural network-based feature extractors. View Full-Text
Keywords: moving object detection; surveillance system; support vector machines; histogram of oriented gradient; meta-cognitive neural network (MCNN); multiple kernel learning moving object detection; surveillance system; support vector machines; histogram of oriented gradient; meta-cognitive neural network (MCNN); multiple kernel learning
►▼ Show Figures 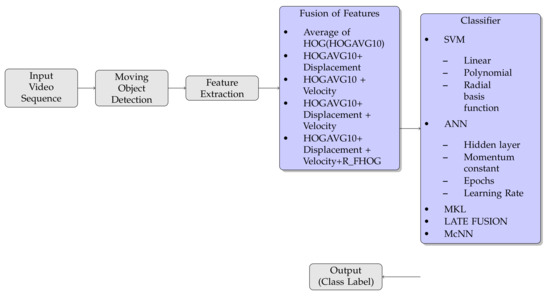