In this work, we show that a late fusion approach to multimodality in sign language recognition improves the overall ability of the model in comparison to the singular approaches of image classification (88.14%) and Leap Motion data classification (72.73%). With a large synchronous dataset of 18 BSL gestures collected from multiple subjects, two deep neural networks are benchmarked and compared to derive a best topology for each. The Vision model is implemented by a Convolutional Neural Network and optimised Artificial Neural Network, and the Leap Motion model is implemented by an evolutionary search of Artificial Neural Network topology. Next, the two best networks are fused for synchronised processing, which results in a better overall result (94.44%) as complementary features are learnt in addition to the original task. The hypothesis is further supported by application of the three models to a set of completely unseen data where a multimodality approach achieves the best results relative to the single sensor method. When transfer learning with the weights trained via British Sign Language, all three models outperform standard random weight distribution when classifying American Sign Language (ASL), and the best model overall for ASL classification was the transfer learning multimodality approach, which scored 82.55% accuracy. View Full-Text
Keywords: sign language recognition; multimodality; late fusion sign language recognition; multimodality; late fusion
►▼ Show Figures 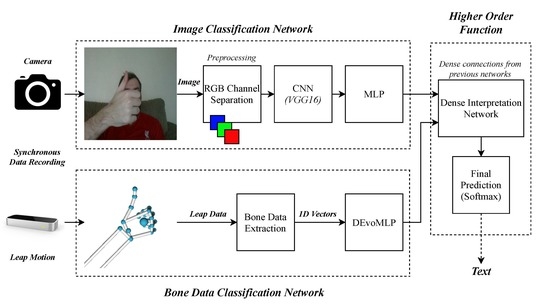