Forcecardiography: A Novel Technique to Measure Heart Mechanical Vibrations onto the Chest Wall

This paper presents forcecardiography (FCG), a novel technique to measure local, cardiac-induced vibrations onto the chest wall. Since the 19th century, several techniques have been proposed to detect the mechanical vibrations caused by cardiovascular activity, the great part of which was abandoned due to the cumbersome instrumentation involved. The recent availability of unobtrusive sensors rejuvenated the research field with the most currently established technique being seismocardiography (SCG). SCG is performed by placing accelerometers onto the subject’s chest and provides information on major events of the cardiac cycle. The proposed FCG measures the cardiac-induced vibrations via force sensors placed onto the subject’s chest and provides signals with a richer informational content as compared to SCG. The two techniques were compared by analysing simultaneous recordings acquired by means of a force sensor, an accelerometer and an electrocardiograph (ECG). The force sensor and the accelerometer were rigidly fixed to each other and fastened onto the xiphoid process with a belt. The high-frequency (HF) components of FCG and SCG were highly comparable (r > 0.95) although lagged. The lag was estimated by cross-correlation and resulted in about tens of milliseconds. An additional, large, low-frequency (LF) component, associated with ventricular volume variations, was observed in FCG, while not being visible in SCG. The encouraging results of this feasibility study suggest that FCG is not only able to acquire similar information as SCG, but it also provides additional information on ventricular contraction. Further analyses are foreseen to confirm the advantages of FCG as a technique to improve the scope and significance of pervasive cardiac monitoring. View Full-Text
Keywords: seismocardiography; force-sensitive resistor; non-invasive sensor; cardiac monitoring; cardiac function seismocardiography; force-sensitive resistor; non-invasive sensor; cardiac monitoring; cardiac function
►▼ Show Figures 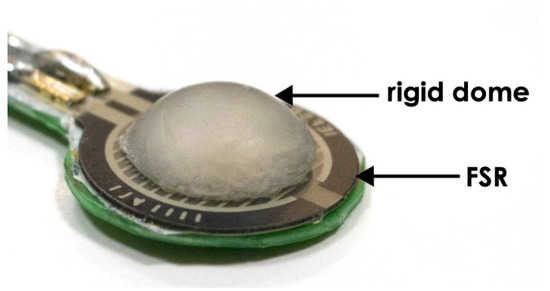