The Internet of Things (IoT) connects smart devices to enable various intelligent services. The deployment of IoT encounters several challenges, such as difficulties in controlling and managing IoT applications and networks, problems in programming existing IoT devices, long service provisioning time, underused resources, as well as complexity, isolation and scalability, among others. One fundamental concern is that current IoT networks lack flexibility and intelligence. A network-wide flexible control and management are missing in IoT networks. In addition, huge numbers of devices and large amounts of data are involved in IoT, but none of them have been tuned for supporting network management and control. In this paper, we argue that Software-defined Networking (SDN) together with the data generated by IoT applications can enhance the control and management of IoT in terms of flexibility and intelligence. We present a review for the evolution of SDN and IoT and analyze the benefits and challenges brought by the integration of SDN and IoT with the help of IoT data. We discuss the perspectives of knowledge-driven SDN for IoT through a new IoT architecture and illustrate how to realize Industry IoT by using the architecture. We also highlight the challenges and future research works toward realizing IoT with the knowledge-driven SDN. View Full-Text
Keywords: Internet of Things (IoT); Software-defined Networking (SDN); knowledge-driving networking; IoT-proxy Internet of Things (IoT); Software-defined Networking (SDN); knowledge-driving networking; IoT-proxy
►▼ Show Figures 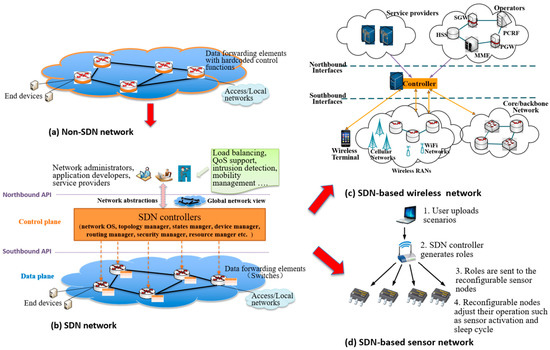