A Clutter-Analysis-Based STAP for Moving FOD Detection on Runways

A Two-Dimensional Adaptive Target Detection Algorithm in the Compressive Domain

The CS theory was proposed by Donoho in 2006 [13]. After being vigorously developed, CS theory became a hot research topic in the applied mathematics and signal processing fields. A combined compression and sampling method for sparse or compressible signals was the core concept of CS theory; in other words, the signal was compressed and sampled simultaneously at a rate below the Nyquist rate.
Traditional one-dimensional measurement models only compress and sample the column vectors of the signal, whereas the row vectors of the signal are not compressed. If we want to further compress the signal, we can use a 2D measurement model to compress the signal rows and columns simultaneously [14,15].
Supposed that a two-dimensional signal , called K (K < N1, K < N2) ranks sparse, meaning X only has K nonzero elements. The compressive sampling signal can be calculated through two measurement matrixes, and , which were non-adaptive; they can simultaneously compress a signal’s row and column vectors separately. The compressive sampling ratios of rows and columns are Rr = M2/N2 and Rc = M1/N1, respectively, corresponding to the compressive sampling ratio of the 2D measurement model, which is . Thereby, the 2D measurement equation can be expressed as: where every element in Y contains the complete information of X, as shown in Figure 1. Compared with the one-dimensional measurement model, the 2D measurement model can compress the signal’s row and column vectors simultaneously, which more deeply compresses the image, and lowers the compressive sampling ratio. Additionally, the detector’s scale is further decreased, and the memory capacity requirement in the hardware implementation is reduced.
Natural signals are not usually sparse in the time domain, whereas if the original signal is sparse or compressible in the Ψ domain, Equation (1) can be written as: where Ac and Ar are the sensing matrix, and Ψc and Ψr are sparsity bases. There are several sparsity bases, including the discrete cosine transform (DCT) base, the fast Fourier transform (FFT) base, the discrete wavelet transform (DWT) base, the Curvelets base [16], the Gabor base [17], and redundant dictionaries [18].
CS is an under-sampling measurement, and there are infinite solutions satisfying Equation (2) because the dimensions of Y are much fewer than for X. Therefore, dissolving the original signal X from the measurement data Y is a nondeterministic-polynomial (NP)-hard problem. To reconstruct the sparse signal precisely, Candes and Tao [19] proved that the sensing matrix A must satisfy the restricted isometry property (RIP). Giving a discretional value of k = 1,2,…,K, we defined A’s restricted isometry constants ak to be the smallest quantity, such that A obeys: where x is a k-order sparse constant, , and A satisfies k-order RIP. We can design the measurement matrix to make A = ΦΨ meet the RIP requirement on the condition that Ψ is constant. There are three kinds of random measurement matrixes [20] that are frequently used: (1) Measurement matrix elements are independent, and they obey a certain distribution, including the Gauss Random matrix, Bernoulli Random matrix, and Sub-Gauss Random matrix. (2) The measurement matrix is composed of random rows in any orthogonal matrix, including the Part Fourier matrix, Part Hadamard matrix, and Noncorrelation Random matrix. (3) The measurement matrix is composed of one specific signal, including the Toeplitz matrix, Circulant matrix, Binary Sparse matrix, and Structurally Random matrix.

The main idea of 2D CDAT first involved subtracting the compressive image with a background, and then mapping the compressive-subtracted image to the spatial domain by using the property of the Gram matrix, then finally detecting targets via the adaptive threshold partition method.

Space-based geosynchronous Earth orbit early warning satellites run in geosynchronous orbit with an orbital altitude ranging from 36,000 km to 40,000 km. For an optical imaging system with a focal length of 1 m and a pixel size of 30 μm, the corresponding ground distinguishability is 1 km [21]. The weak flame of a ballistic missile is tens of meters wide and hundreds of meters long, and the Earth’s surface is covered with clouds within an altitude of 20 km. Hence, targets usually occupy one or several pixels in the image, and clouds mainly occupy the rest. Supposing a detector images at a speed of two frames per meter; each pixel in the image represents an area of 1 km2 when detecting a ballistic missile at a speed of 4–8 km/s, so its speed in the image plane is 2–4 pixels per frame. Suppose that the maximum drift speed of clouds is 50 m/s, so that its speed in the image plane is 0.025 pixels per frame; the clouds can be considered as static or slowly changing in the background. Therefore, the frame subtraction method, which sees the previous frame image as a background, then obtains the subtraction image of the current frame and background, and can reserve targets and remove most of the background points. Suppose the current frame image is Xt, the previous frame image is Xt–1, and the subtraction image is Xd; their relationship is expressed as:
Xd reserves the foreground targets and a small amount of mutational background points, so it is sparser and has a higher signal-to-noise ratio (SNR) than Xt.
A regular mask compressive sampling pattern, using the same measurement matrixes Φc and Φr to achieve the 2D measurement , can be used for sequential images in compressive sensing. The following can be obtained from background subtraction in the compressive domain:
If the grayscale of the mutational background points was extremely high, these mutational background points were likely to be mistaken for targets in the subtraction image. We had to update the background using the current frame image to reduce the influence of the mutational background points and implement the adaptive background update. The updated background is as follows: where α is the learning rate of the background-adaptive update. Hence, the subtraction image in the compressive domain can be further rewritten as:

3.2. Mapping from the Compressive Domain to the Spatial Domain

Analyzing the normalized measurement matrix , given that the Gram matrix G is , , the diagonal elements of G are all 1, and the rest of the elements are small values of approximately 0, meaning G ≈ IN, where I is a unit matrix, and the higher the dimensions of the G matrix, the smaller the values of the off-diagonal elements. Taking the Gauss Random Matrix as an example, to statistically analyze G’s off-diagonal elements, 100 tests were completed with different dimensions matrixes. The Probability Density Function (PDF) of G’s off-diagonal elements is shown in Figure 2. With the expansion of G matrix’s dimensions, the probability of off-diagonal elements near 0 increased, and the G matrix was increasingly close to the unit matrix. Therefore, the Gram matrix can be used to extract target spatial information in compressive images.
The size of the Gram matrix is proportional to the compressive sampling ratio. Usually, the images used in the experiment were 512 × 512 or 256 × 256 pixels, the compressive sampling ratio of the rows and columns was at least 0.5, and the image size was compressed to at least one- quarter of the original. The corresponding measurement matrix was 256 × 512 or 128 × 256 pixels. Therefore, the size of the Gram matrix was 256 × 256 or 128 × 128, respectively. In subsequent experiments, only a 128 × 128 Gram matrix was used, so Figure 2 only shows a 256 × 256 Gram matrix.
The following operations are performed on :
The SNR of the subtraction image was high because there were only foreground targets and a few mutational background points in the subtraction image. The subtraction values were larger at the target positions, while being close to 0 in other positions. The Gram matrix was close to the unit matrix; as a result, the Gram matrix could approximately recover the subtraction image. Zt did not change the characteristics of the subtraction image (Xt – Xt–1) after operation, where the targets were still outstanding, and the original zero-value points were approximately 0 after the operation. Hence, the compressive subtracted image could be mapped in the spatial domain using Equation (8), where the subtraction of the original image was recovered and the targets’ spatial information was mapped out. Then, the targets’ positions can be detected from Zt using an appropriate threshold.

The main contributions and conclusions our work are as follows:

(1)
2D CDAT was proposed to detect a target without reconstruction. Aiming at a 2D measurement model, the signal was mapped from the compressive domain to the spatial domain by directly using the characteristics of the Gram matrix, and the advanced adaptive threshold partition method was used to detect the target.
(2)
Using real infrared images as the experimental data, the compressive subtracted images were mapped to the spatial domain using different measurement matrixes. Experiments showed that the decoded subtraction images produced higher SNR and SCR than the original images. The comparison of the mapping effect of the observation matrixes indicated that the subtraction images mapped by the Part Hadamard matrix achieved higher SNR, SCR, BSF, and AUC values, and better detection performance.
(3)
Comparing the 2D CDAT algorithm with the traditional reconfiguration detection algorithms, three algorithms—2D CDAT, 2D IAA, and 2D SL0—were used to detect the target. The results showed that the 2D CDAT algorithm was superior to the other two algorithms in terms of operation time, AUC, SNR, and SCR, and that it could achieve more efficient target detection.
(4)
The proposed 2D CDAT algorithm can be used in remote sensing field to achieve a more efficient target detection. In the next step, we consider to apply the 2D CDAT algorithm to the target tracking issues.

W.C. designed and implemented the experiments and analyses and wrote the paper; W.Z. revised the figures and the tables; S.H. revised the paper.

This work was supported by National Natural Science Fund of China under grant no. 61573374.

We are particularly grateful to Yi Lu for his help of grammar check and Wei Zhao for his effort of revising the tables and figures. We are also very grateful to the editor and reviewers for their constructive comments and suggestions that help improve the quality of this manuscript. 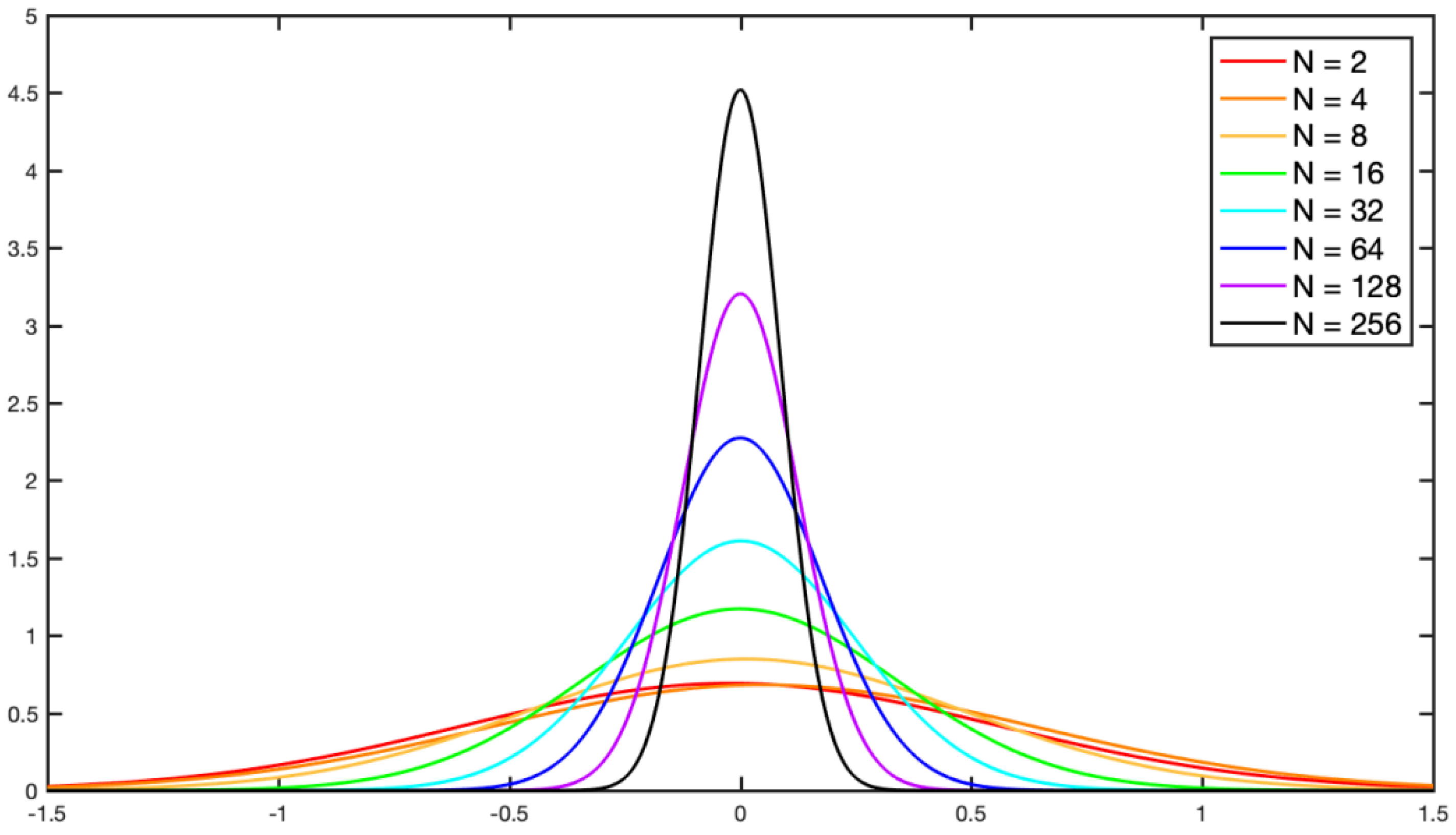 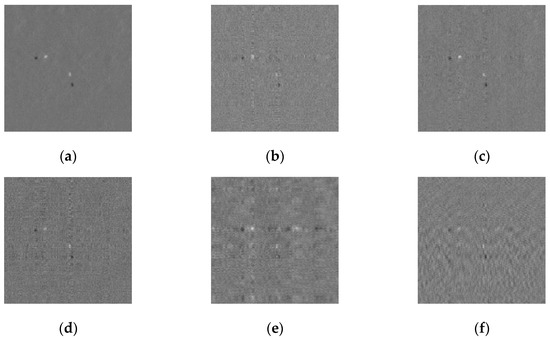 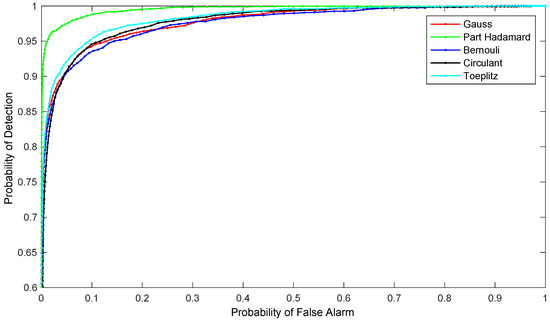 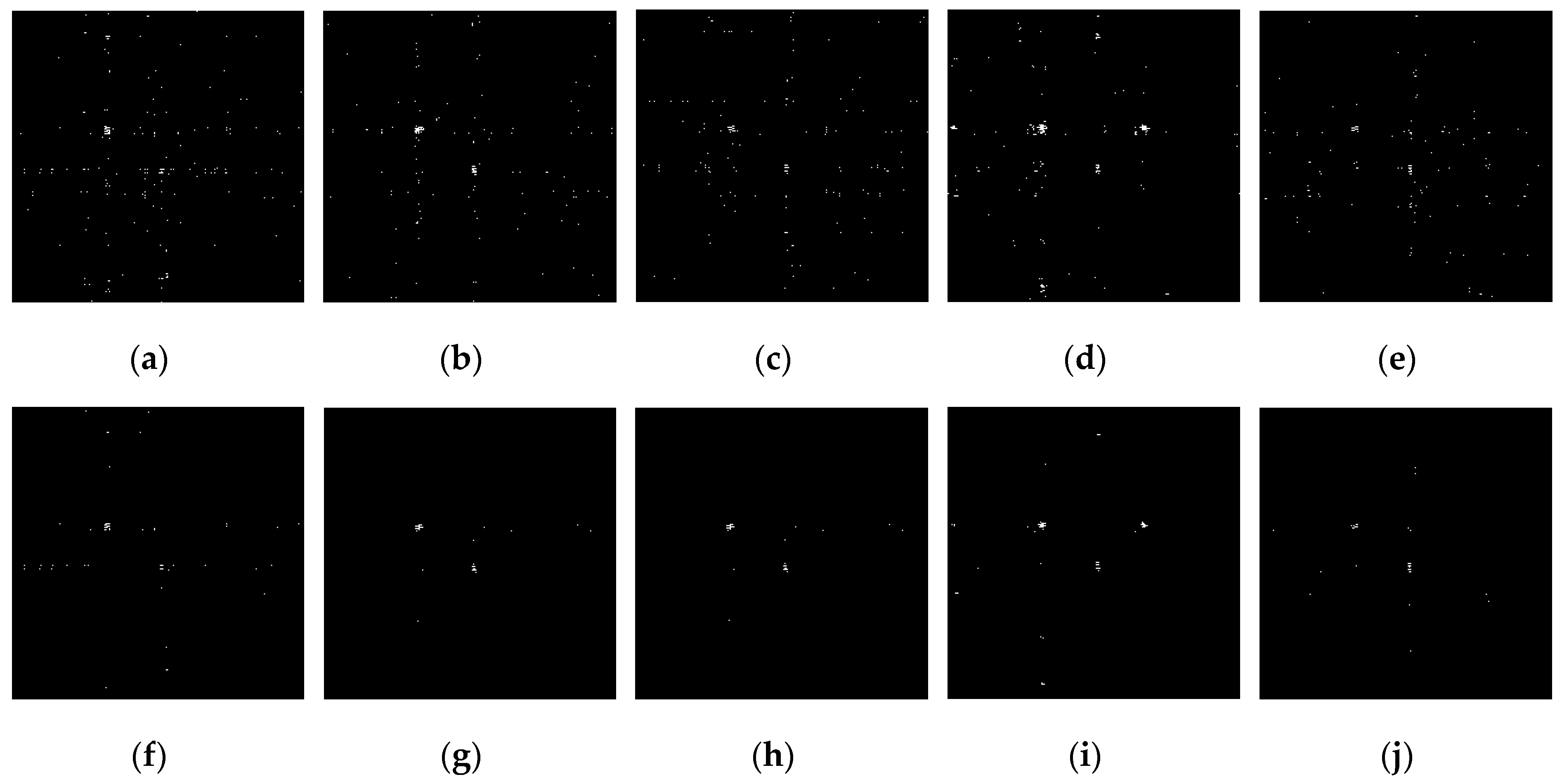 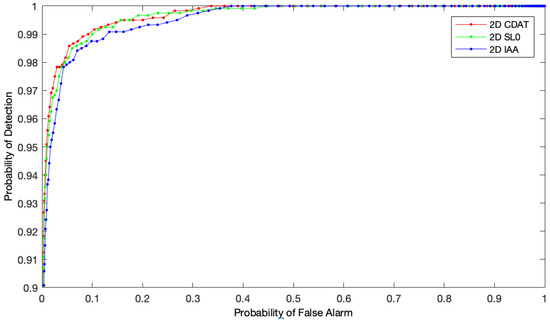