An ultra-high-speed algorithm based on Histogram of Oriented Gradient (HOG) and Support Vector Machine (SVM) for hardware implementation at 10,000 frames per second (FPS) under complex backgrounds is proposed for object detection. The algorithm is implemented on the field-programmable gate array (FPGA) in the high-speed-vision platform, in which 64 pixels are input per clock cycle. The high pixel parallelism of the vision platform limits its performance, as it is difficult to reduce the strides between detection windows below 16 pixels, thus introduce non-negligible deviation of object detection. In addition, limited by the transmission bandwidth, only one frame in every four frames can be transmitted to PC for post-processing, that is, 75% image information is wasted. To overcome the mentioned problem, a multi-frame information fusion model is proposed in this paper. Image data and synchronization signals are first regenerated according to image frame numbers. The maximum HOG feature value and corresponding coordinates of each frame are stored in the bottom of the image with that of adjacent frames’. The compensated ones will be obtained through information fusion with the confidence of continuous frames. Several experiments are conducted to demonstrate the performance of the proposed algorithm. As the evaluation result shows, the deviation is reduced with our proposed method compared with the existing one. View Full-Text
Keywords: ultra-high-speed vision; object detection; field-programmable gate array; histogram of oriented gradient; multi-frame information fusion model ultra-high-speed vision; object detection; field-programmable gate array; histogram of oriented gradient; multi-frame information fusion model
►▼ Show Figures 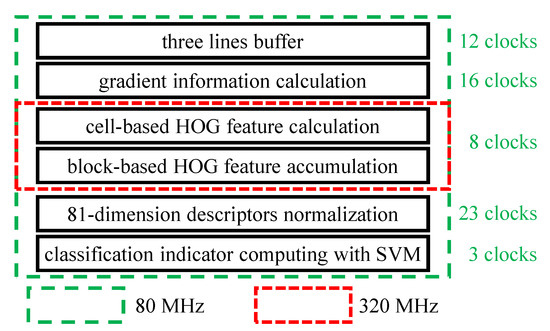