The composition of fine-ground lead zirconate-titanate powder Pb(Zr0.52Ti0.48)O3, suspended in PZT and bismuth titanate (BiT) solutions, is deposited on the curved surface of IN718 and IN738 nickel-based supper alloy substrates up to 100 µm thickness. Photochemical metal organic and infiltration techniques are implemented to produce smooth, semi-dense, and crack-free random orientated thick piezoelectric films as piezo-sensors, free of any dopants or thickening polymers. Every single layer of the deposited films is heated at 200 °C with 10 wt.% excess PbO, irradiated by ultraviolet lamp (365 nm, 6 watt) for 10 min, pyrolyzed at 400 °C, and subsequently annealed at 700 °C for one hour. This process is repeated successively until reaching the desired thickness. Au and Pt thin films are deposited as the bottom and top electrodes using evaporation and sputtering methods, respectively. PZT/PZT and PZT/BiT composite films are then characterized and compared to similar PZT and BiT thick films deposited on the similar substrates. The effect of the composition and deposition process is also investigated on the crystalline phase development and microstructure morphology as well as the dielectric, ferroelectric, and piezoelectric properties of piezo-films. The maximum remnant polarization of Pr = 22.37 ± 0.01, 30.01 ± 0.01 µC/cm2, the permittivity of εr = 298 ± 3, 566 ± 5, and piezoelectric charge coefficient of d33 = 126, 148 m/V were measured versus the minimum coercive field of Ec = 50, 20 kV/cm for the PZT/PZT and PZT/BiT thick films, respectively. The thick film piezo-sensors are developed to be potentially used at frequency bandwidth of 1–5 MHz for rotary structural health monitoring and also in other industrial or medical applications as a transceiver. View Full-Text
Keywords: composite; piezoelectric sensor; thick film; sol-gel PMOD deposition; infiltration; PZT/PZT; PZT/BiT; characterization; structural health monitoring; aerospace structure composite; piezoelectric sensor; thick film; sol-gel PMOD deposition; infiltration; PZT/PZT; PZT/BiT; characterization; structural health monitoring; aerospace structure
►▼ Show Figures 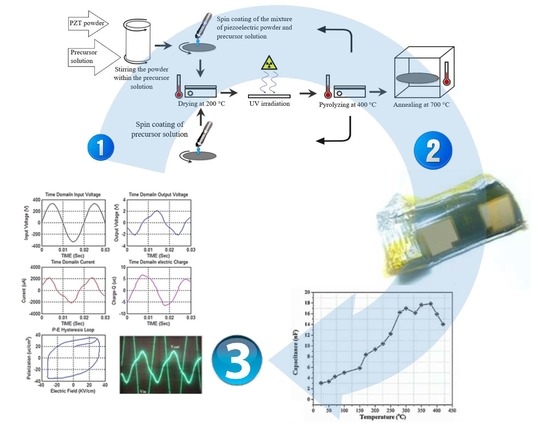