Optical Method for Estimating the Chlorophyll Contents in Plant Leaves

Ultra-weak photon emission (UPE) is the spontaneous emission from living systems mainly attributed to oxidation reactions, in which reactive oxygen species (ROS) may play a major role. Given the capability of the next-generation electron-multiplying CCD (EMCCD) sensors and the easy use of liquid crystal tunable filters (LCTF), the aim of this work was to explore the potential of a simple UPE spectrometer to measure the UPE from a human hand. Thus, an easy setup was configured based on a dark box for inserting the subject’s hand prior to LCTF as a monochromator and an EMCCD sensor working in the full vertical binning mode (FVB) as a spectra detector. Under controlled conditions, both dark signals and left hand UPE were acquired by registering the UPE intensity at different selected wavelengths (400, 450, 500, 550, 600, 650, and 700 nm) during a period of 10 min each. Then, spurious signals were filtered out by ignoring the pixels whose values were clearly outside of the Gaussian distribution, and the dark signal was subtracted from the subject hand signal. The stepped spectrum with a peak of approximately 880 photons at 500 nm had a shape that agreed somewhat with previous reports, and agrees with previous UPE research that reported UPE from 420 to 570 nm, or 260 to 800 nm, with a range from 1 to 1000 photons s−1 cm−2. Obtaining the spectral distribution instead of the total intensity of the UPE represents a step forward in this field, as it may provide extra information about a subject’s personal states and relationship with ROS. A new generation of CCD sensors with lower dark signals, and spectrographs with a more uniform spectral transmittance, will open up new possibilities for configuring measuring systems in portable formats. View Full-Text
Keywords: ultra-weak photon emission; spectrometer; measurement; electron multiplying charge coupled device sensor; liquid crystal tunable filter ultra-weak photon emission; spectrometer; measurement; electron multiplying charge coupled device sensor; liquid crystal tunable filter
►▼ Show Figures 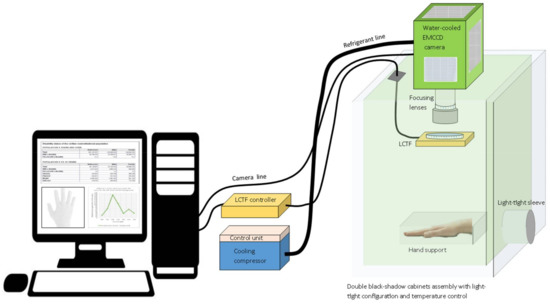