Practical tools which can be quickly administered are needed for measuring subtle changes in cognitive–motor performance over time. Frailty together with cognitive impairment, or ‘cognitive frailty’, are shown to be strong and independent predictors of cognitive decline over time. We have developed an interactive instrumented trail-making task (iTMT) platform, which allows quantification of motor planning error (MPE) through a series of ankle reaching tasks. In this study, we examined the accuracy of MPE in identifying cognitive frailty in older adults. Thirty-two older adults (age = 77.3 ± 9.1 years, body-mass-index = 25.3 ± 4.7 kg/m2, female = 38%) were recruited. Using either the Mini-Mental State Examination or Montreal Cognitive Assessment (MoCA), 16 subjects were classified as cognitive-intact and 16 were classified as cognitive-impaired. In addition, 12 young-healthy subjects (age = 26.0 ± 5.2 years, body-mass-index = 25.3 ± 3.9 kg/m2, female = 33%) were recruited to establish a healthy benchmark. Subjects completed the iTMT, using an ankle-worn sensor, which transforms ankle motion into navigation of a computer cursor. The iTMT task included reaching five indexed target circles (including numbers 1-to-3 and letters A&B placed in random order) on the computer-screen by moving the ankle-joint while standing. The ankle-sensor quantifies MPE through analysis of the pattern of ankle velocity. MPE was defined as percentage of time deviation between subject’s maximum ankle velocity and the optimal maximum ankle velocity, which is halfway through the reaching pathway. Data from gait tests, including single task and dual task walking, were also collected to determine cognitive–motor performance. The average MPE in young-healthy, elderly cognitive-intact, and elderly cognitive-impaired groups was 11.1 ± 5.7%, 20.3 ± 9.6%, and 34.1 ± 4.2% (p < 0.001), respectively. Large effect sizes (Cohen’s d = 1.17–4.56) were observed for discriminating between groups using MPE. Significant correlations were observed between the MPE and MoCA score (r = −0.670, p < 0.001) as well as between the MPE and dual task stride velocity (r = −0.584, p < 0.001). This study demonstrated feasibility and efficacy of estimating MPE from a practical wearable platform with promising results in identifying cognitive–motor impairment and potential application in assessing cognitive frailty. The proposed platform could be also used as an alternative to dual task walking test, where gait assessment may not be practical. Future studies need to confirm these observations in larger samples. View Full-Text
Keywords: cognitive frailty; wearable; cognitive–motor impairment; Alzheimer’s disease; motor planning error; instrumented trail-making task; ankle reaching task; dual task walking cognitive frailty; wearable; cognitive–motor impairment; Alzheimer’s disease; motor planning error; instrumented trail-making task; ankle reaching task; dual task walking
►▼ Show Figures 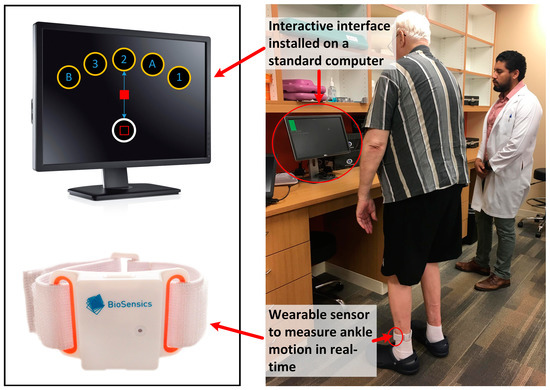