The artificial pancreas (AP) system is designed to regulate blood glucose in subjects with type 1 diabetes using a continuous glucose monitor informed controller that adjusts insulin infusion via an insulin pump. However, current AP developments are mainly hybrid closed-loop systems that include feed-forward actions triggered by the announcement of meals or exercise. The first step to fully closing the loop in the AP requires removing meal announcement, which is currently the most effective way to alleviate postprandial hyperglycemia due to the delay in insulin action. Here, a novel approach to meal detection in the AP is presented using a sliding window and computing the normalized cross-covariance between measured glucose and the forward difference of a disturbance term, estimated from an augmented minimal model using an Unscented Kalman Filter. Three different tunings were applied to the same meal detection algorithm: (1) a high sensitivity tuning, (2) a trade-off tuning that has a high amount of meals detected and a low amount of false positives (FP), and (3) a low FP tuning. For the three tunings sensitivities 99 ± 2%, 93 ± 5%, and 47 ± 12% were achieved, respectively. A sensitivity analysis was also performed and found that higher carbohydrate quantities and faster rates of glucose appearance result in favorable meal detection outcomes. View Full-Text
Keywords: meal detection; artificial pancreas; unannounced meals; type 1 diabetes; physiological models; Unscented Kalman Filter meal detection; artificial pancreas; unannounced meals; type 1 diabetes; physiological models; Unscented Kalman Filter
►▼ Show Figures 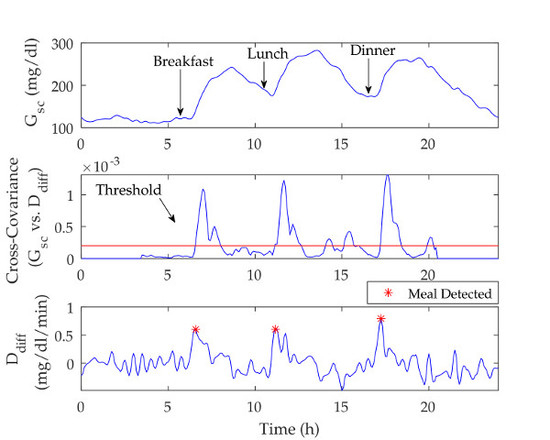