Electrochemical impedance spectroscopy (EIS)-based biosensors are widely used in food, medical, and environmental analysis since they can be easily miniaturized using microelectromechanical systems (MEMS) technology and directly convert biomolecular reactions to relevant electrical information [1]. EIS-based sensors typically utilize an electrochemical cell that consists of two electrodes (working and counter electrodes) filled with an electrolyte. The electrodes (or insulator) are functionalized with particular bio-receptors for target-specific detection of biomolecules. The binding of target biomolecules (i.e., bio-recognition events) modifies the interfacial properties, causing changes in impedance values. The bio-recognition events such as antigen–antibody complex formation, DNA hybridization, and enzymatic reactions can be quantified by measuring the effective changes of the impedances [2].
EIS-based biosensors can be classified into two types depending on the presence of redox reagents, namely, non-faradaic EIS (nf-EIS)-based and faradaic EIS (f-EIS)-based sensors. The nf-EIS-based sensor uses an electrolyte that does not contain a redox reagent and predominantly depends on the capacitance change at interface between the electrodes and the electrolyte. The f-EIS-based sensor mainly uses the charge transfer process between the electrodes and the redox reagent. By controlling the charge transfer process using a bio-reaction, the f-EIS sensor can achieve a higher sensitivity than nf-EIS [3,4]. However, the incorporation of a redox reagent into the f-EIS sensor makes it difficult to detect specific biomolecules such as amyloid beta (Aβ), which is the main component of amyloid plaques found in the brains of patients who have Alzheimer’s disease [5]. The redox reagent contains metal ions such as aluminum (Al3+), iron (Fe2+/3+), and zinc (Zn2+). These metal ions can promote the Aβ aggregation in buffer solution [6]. In both nf-EIS and f-EIS sensors based on immunobinding of the antigen–antibody complex, the one-to-one reaction of antigen–antibody is critical in accurately measuring the biomarkers. However, the aggregation can disturb the one-to-one reaction of Aβ oligomer with antibodies and disables quantitative detection of Aβ at extremely low concentrations [7]. Therefore, to precisely detect Aβ using f-EIS-based sensors, the aggregation effect must be minimized.
In this study, we propose an aggregation-free f-EIS technique that can achieve the high detection sensitivity of Aβ on an interdigitated microelectrode (IME) sensor. The proposed sensing method alleviates the aggregation of Aβ via a deliberate control of buffer solution that involves a conversion of the buffer containing the [Fe(CN)6]3−/4− into a pure buffer without the [Fe(CN)6]3−/4− during the reaction of Aβ with its specific antibody, 6E10. The IME sensor was fabricated based on a MEMS process. The sensitivity of the fabricated sensor was verified by measuring the impedance spectrum of the sensor. Before verifying the sensitivity of the proposed f-EIS-based IME sensor, we examined the equivalent circuits of an nf-EIS-based IME sensor and an f-EIS-based IME sensor. The circuit factors affecting the sensitivity of each EIS-based IME sensor were analyzed by measuring the change of each factor from the Aβ reaction. The sensitivities of the three sensors were quantified by analyzing the measured impedance changes by the reaction of various concentration of Aβ. Consequently, we demonstrated that the sensitivity of the proposed f-EIS-based IME sensor was enhanced approximately 7.40-fold and 10.93-fold compared to the f-EIS-based IME sensor and the nf-EIS-based IME sensor, respectively.

The EIS-based biosensors were classified into two types, non-faradaic and faradaic, depending on the presence or absence of redox reaction. To demonstrate the detection mechanisms, we analyzed the Randles equivalent circuit models of the two methods with the experimentally measured impedance spectra of the two [8].
Figure 1a is the equivalent circuit model of the nf-EIS-based IME sensor. The circuit model is composed of a solution resistance Rs, which represents bulk solution conductivity, and a constant phase element (CPE) connected in series. The CPE represents the electric double layer capacitance at the electrodes–electrolyte interface in EIS and the impedance of CPE can be expressed in Equation (1) [9]. The CPE behavior is generally attributed to the time constant distribution caused by interfacial heterogeneity such as electrode surface roughness [10]. The value of α is an indicator of homogeneity of the interfacial properties and takes a value between 0 and 1. α = 1 implies an ideal capacitor, for which Q has a unit of capacitance, farads (F). Otherwise, Q has units of Fs(α−1).
In the case of nf-EIS, which is performed in the absence of redox reagent, the electrodes are electrically isolated from the faradaic reaction such as charge transfer at the electrodes–electrolyte interface. Thus, the nf-EIS-based detection predominantly depends on the total effective capacitance change (CPE change). The effective capacitance change of the sensor is originated from the bio-recognition events of target molecules, e.g., the antigen–antibody complex. When immuno-binding of antigen to antibody occurs at electrodes or insulator surfaces, the thickness or dielectric properties of electrical double-layer capacitance whose typical value is 10–100 μF/cm2 change [11]. However, since the capacitance change by immuno-binding of antigen is typically small when comparing the absolute value of double layer capacitance, the corresponding impedance change is normally less than 10%, and the detection sensitivity of the nf-EIS sensor is inherently low [12,13].
On the other hand, the f-EIS method, which is performed in the presence of redox reagent, can detect the various biomolecules with high sensitivity by measuring the charge transfer process between electrode and redox reagent [3,4]. Figure 1b shows the equivalent circuit of the f-EIS-based IME sensor. The charge transfer resistance, Rct, results from the charge transfer process between the redox reagent and the electrodes. The charge transfer of the reagent generates a faradaic current depending on the electrode potential and makes a parallel branch with the capacitance, CPE [14].
When antigen–antibody binding occurs, the kinetics of the redox reagents nearby the electrodes are interfered by physical blocking effects of the antigen–antibody complex [15]. This phenomenon suppresses the charge transfer process by the redox reaction of the reagent. The suppressed charge transfer (or equivalently increased Rct) mainly attributes to the impedance change of the IME sensors; the change of Rct is quantitatively measured to determine the concentration of the target molecules. As more antigen reacts with immobilized antibody, the physical blocking effect of the immune complex further increases, and the total effective impedance change increases accordingly. In the f-EIS-based IME sensor, therefore, by controlling the charge transfer process at the electrodes–electrolyte interface by antigen–antibody binding, the substantial impedance change and high detection sensitivity can be achieved.

Figure 2 depicts a scheme for detecting the Aβ in the f-EIS-based IME sensor: the antibody that specifically binds to the Aβ is locally immobilized on the surface of the insulator between the electrodes. The Aβ and the redox reagent, [Fe(CN)6]3−/4−, are included in the buffer.
In the reaction condition described as f-EIS in Figure 2a, the redox reagents simultaneously cause the charge transfer and the aggregation of Aβ, the antibody not only reacts with the aggregated Aβ but also with the unaggregated Aβ. This causes a biased change of Rct of the f-EIS-based IME sensor, which consequently results in reduced sensitivity. To improve the sensitivity, we proposed a new detection method that preemptively controls the reaction environment with two types of buffer: one containing only the redox reagent for the measurement of the impedance change before and after the immunoassay and another composed of Aβ in phosphate buffered saline (PBS) buffer used during the Aβ immunoassay. The proposed method alleviates Aβ aggregation because the Aβ does not directly contact the redox reagent that causes the aggregation. Therefore, only the unaggregated Aβ binds with the antibody, as shown in Figure 2b, and the proposed f-EIS-based IME sensor can precisely detect the Aβ with high sensitivity.

The sensor having six arrays of interdigitated microelectrodes (IMEs) was fabricated by the MEMS process (Figure 3a) [16]. First, an SiO2 layer with a thickness of 3000 Å was deposited via a thermal oxidation process for insulation, and a Ta/Pt with a thickness of 300/1500 Å was then deposited on SiO2 layer as the electrode layer via sputtering. Each IME sensor was composed of one sensing region with 30 pairs of micro-electrode arrays and two contact pads. A width (W) and a length (L) of one finger in the IME were 5 μm and 300 μm, respectively, and the gap (G) between each finger was 5 μm (Figure 3b).
For the detection of Aβ, the 6E10 was immobilized on the surface of the IME sensor (the SiO2 layer) by subsequent chemical treatments. The sensor was washed with a piranha solution (H2SO4:H2O2 = 4:1), deionized water (D.W.), and IPA to remove the organic and inorganic residues and functionalized by 1% (3-amino-propyl)dimetylethoxysilane (APDMES), PVP-CHO, 10 mM NaBH4, and 1% glutaraldehyde [16]. After antibody immobilization on the IME, a polydimethylsiloxane (PDMS) mold with a microfluidic channel was bonded onto the sensor.

In this paper, we propose an f-EIS-based method that enhances the sensitivity of IME sensors for Aβ detection and minimizes aggregation. The proposed f-EIS method employs two key ideas: (1) detection using charge transfer resistance measurement in a buffer solution containing redox reagent, Fe(CN6)3−/4−; (2) deliberate control of the buffer environment during the immunoassay to alleviate aggregation. The buffer control process during the immunoassay prevents direct interaction between Aβ and the redox reagent, Fe(CN6)3−/4−, which is the primary cause of aggregation. The experimental results show that the proposed f-EIS method with buffer control enhanced Aβ detection sensitivity 10.93-fold and 7.40-fold, compared with the nf-EIS sensor and conventional f-EIS sensor, respectively. Therefore, the proposed f-EIS IME sensor enables sensitivity improvement by using charge transfer resistance and alleviating the aggregation effect. The detection sensitivity of the proposed f-EIS can be improved by modification of the sensing region in further studies; suggested methods include the immobilization of antibodies on electrode surfaces instead of on the insulator between electrodes. The antigen–antibody complex formation at the electrode surface can maximize the surface blocking effects of the complex, which would result in the amplified change of charge transfer resistance after the immunoassay.

This work was supported by the Korea Institute of Science and Technology (KIST) institutional program (2E26840). The authors are grateful for the financial support from the Korea Health Industry Development Institute (KHIDI, HI14C3319). Fabrication of the IME sensors was performed at the KIST Micro-Nano Fabrication center (Seoul, Korea). Scanning electron microscopy (SEM) of the IME sensors was executed at the KIST Advanced Analysis center (Seoul, Korea). 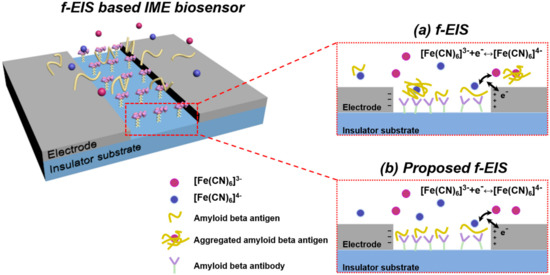 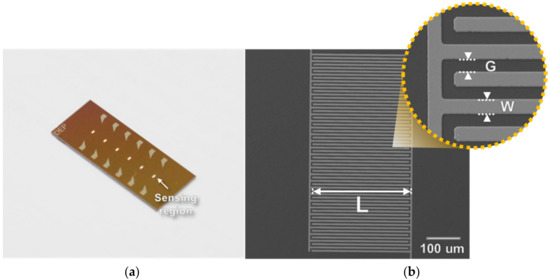 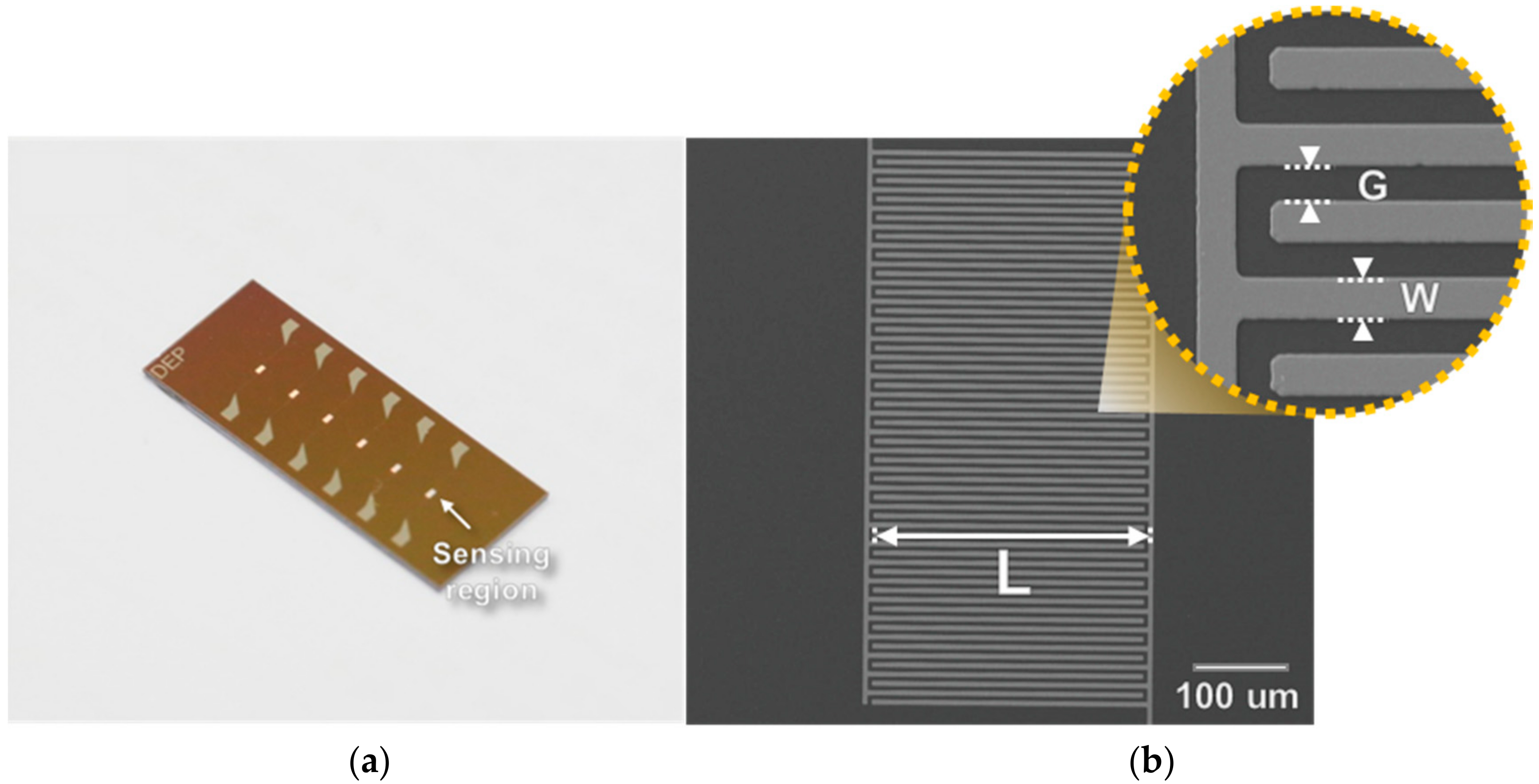 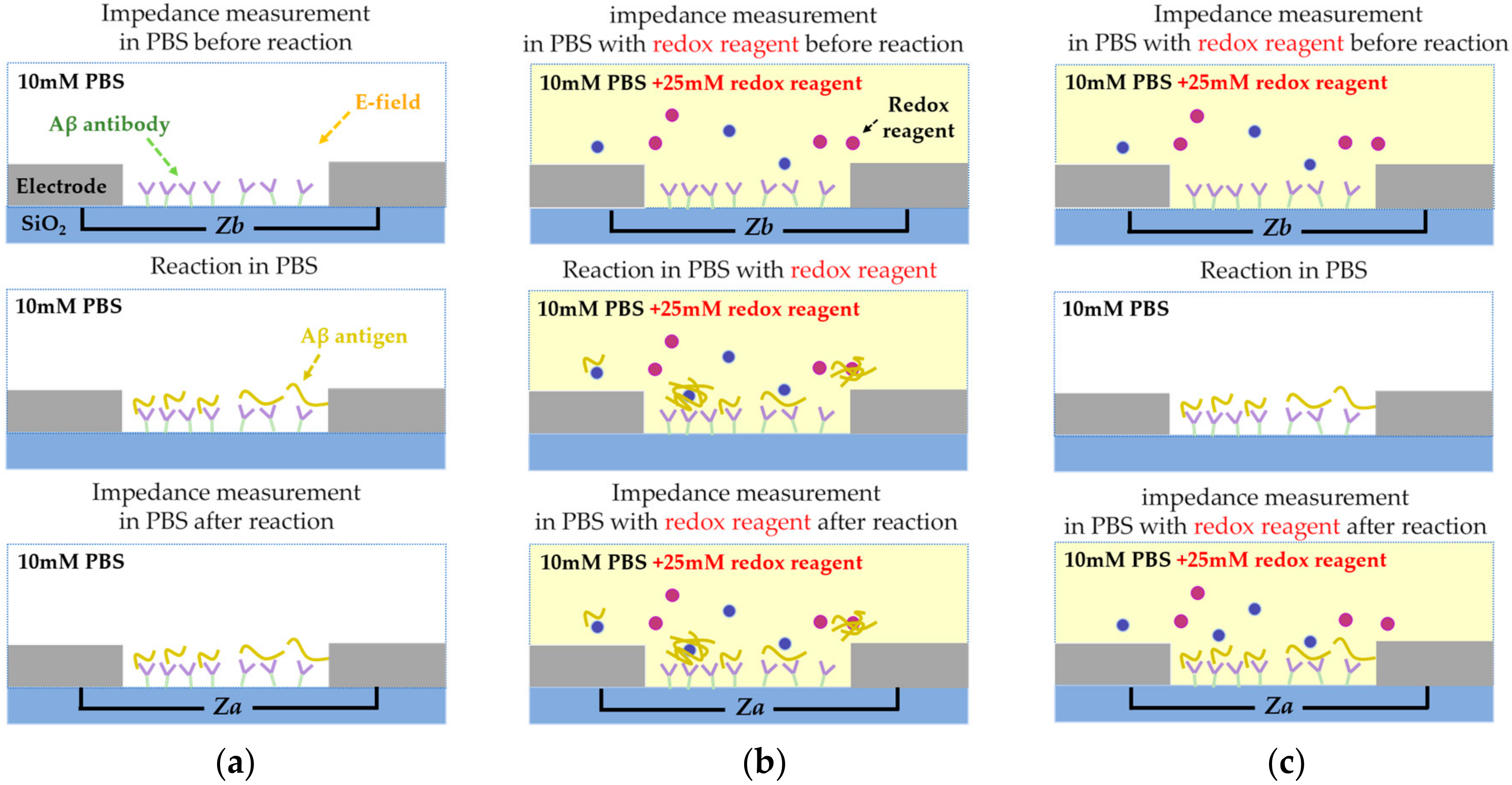 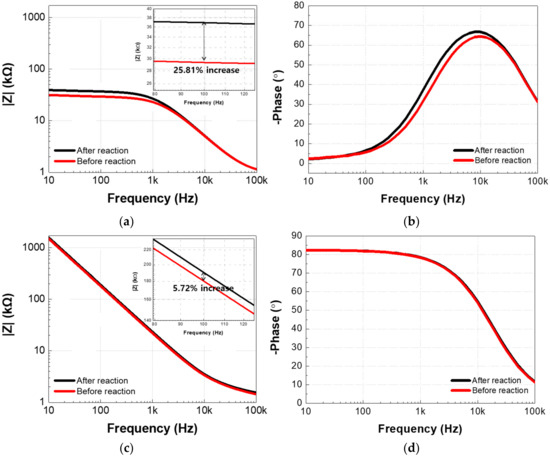 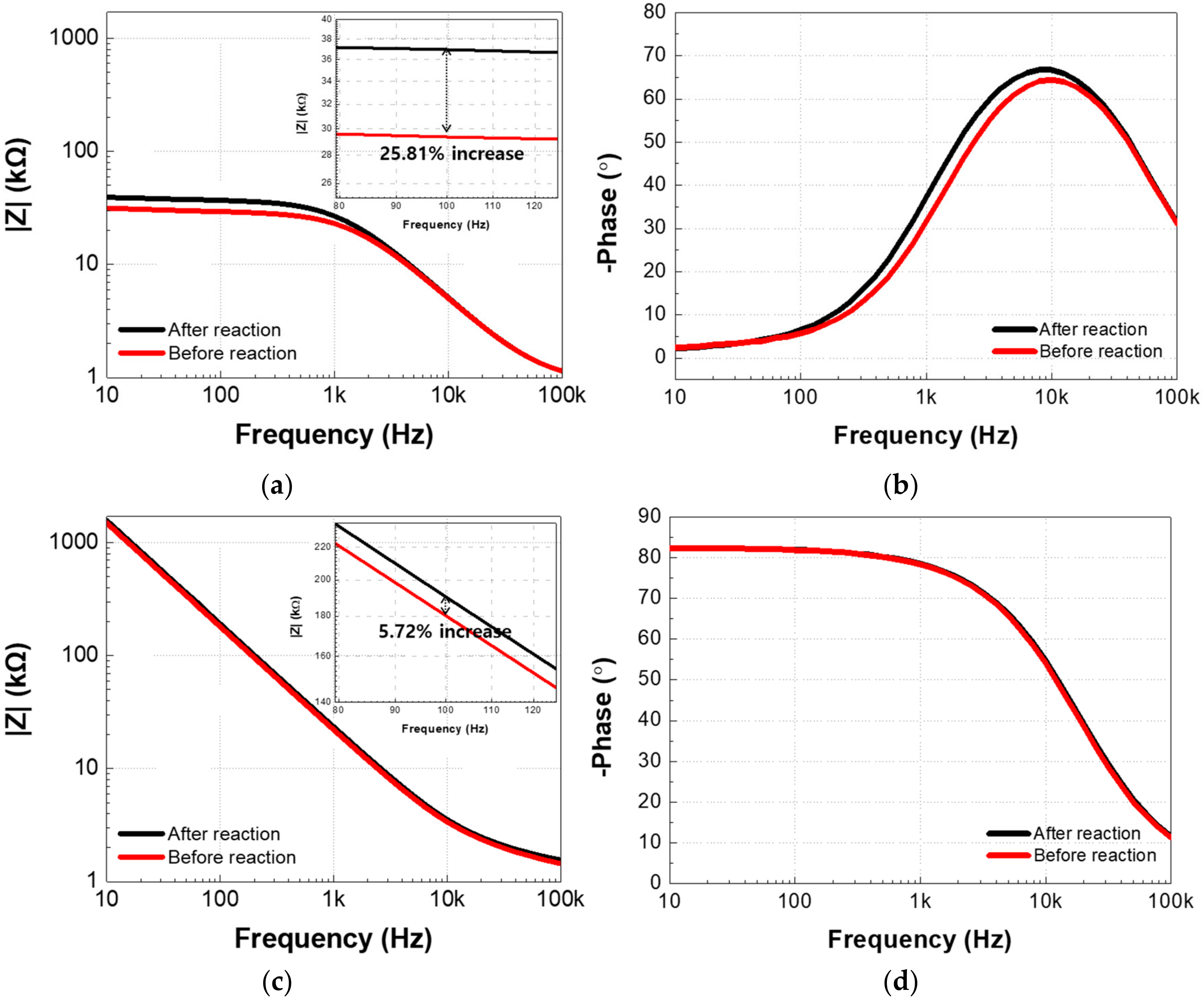 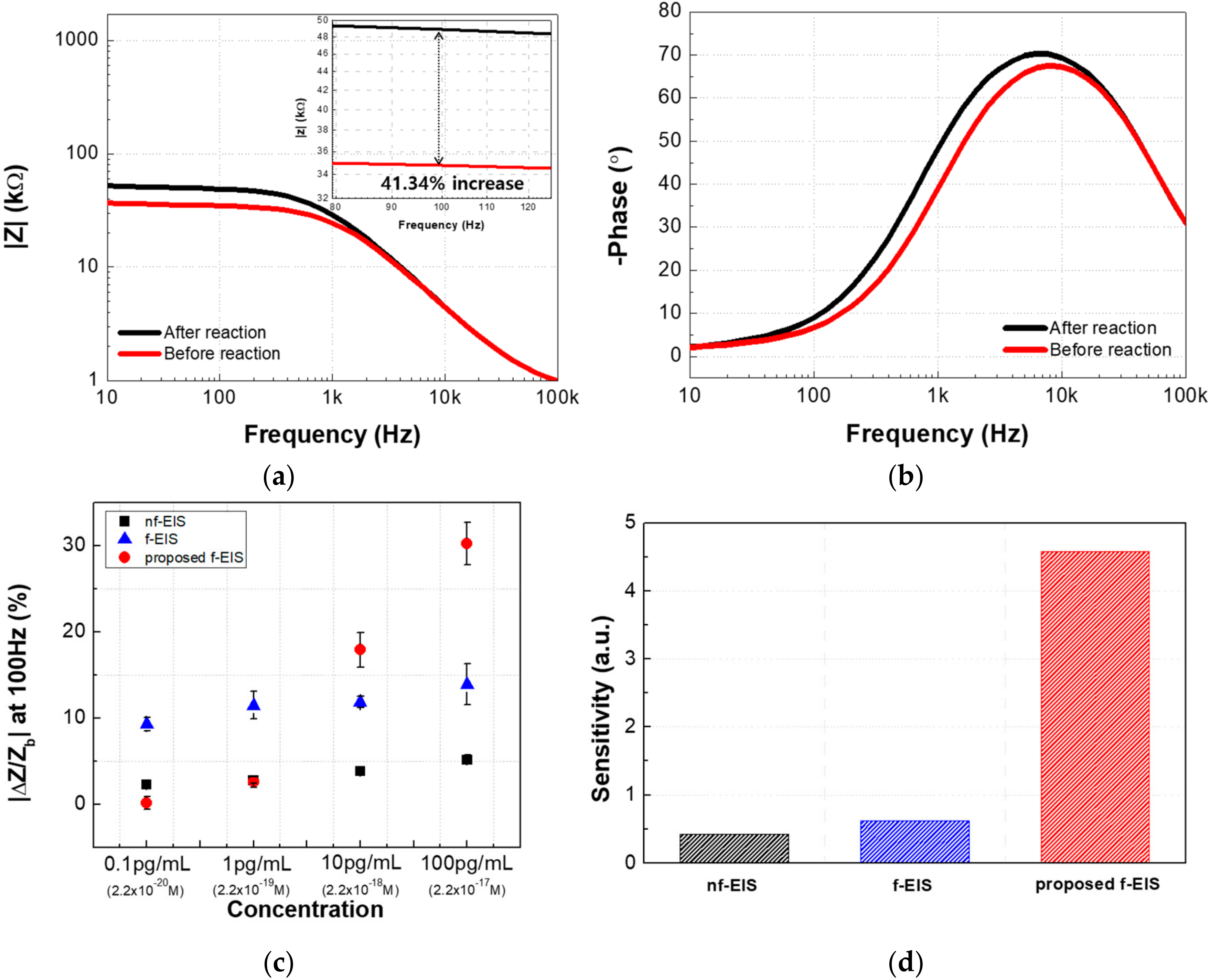