Spectroscopic Analysis of Melatonin in the Terahertz Frequency Range

Magnetoconductivity and Terahertz Response of a HgCdTe Epitaxial Layer

An epitaxial layer of HgCdTe—a THz detector—was studied in magnetotransmission, magnetoconductivity and magnetophotoconductivity experiments at cryogenic temperatures. In the optical measurements, monochromatic excitation with photon frequency ranging from 0.05 THz to 2.5 THz was used. We show a resonant response of the detector at magnetic fields as small as 10 mT with the width of the resonant line equal to about 5 mT. Application of a circular polarizer at 2.5 THz measurements allowed for confirming selection rules predicted by the theory of optical transitions in a narrow-gap semiconductor and to estimate the band-gap to be equal to about 4.5 meV. The magnetoconductivity tensor was determined as a function of magnetic field and temperature 2 K < T < 120 K and analysed with a standard one-carrier conductivity model and the mobility spectrum technique. The sample showed n-type conductivity at all temperatures. At temperatures above about 30 K, conductivity was found to be reasonably described by the one-carrier model. At lower temperatures, this description is not accurate. The algorithm of the spectrum of mobility applied to data measured below 30 K showed presence of three types of carriers which were tentatively interpreted as electrons, light holes and heavy holes. The mobility of electrons and light holes is of the order of 10 cm/Vs at the lowest temperatures. Magnetophotoconductivity experiments allowed for proposing a detector working at 2 K and 50 mT with a flat response between 0.05 THz and 2.5 THz. View Full-Text
Keywords: THz magnetospectroscopy; magnetoconductivity; HgCdTe THz magnetospectroscopy; magnetoconductivity; HgCdTe
►▼ Show Figures 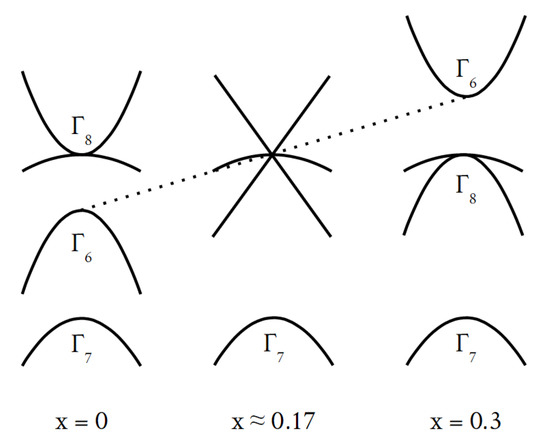