In this study, an organic-inorganic semiconductor gas sensor was fabricated to detect ammonia gas. An inorganic semiconductor was a zinc oxide (ZnO) nanowire array produced by atomic layer deposition (ALD) while an organic material was a p-type semiconductor, poly(3-hexylthiophene) (P3HT). P3HT was suitable for the gas sensing application due to its high hole mobility, good stability, and good electrical conductivity. In this work, P3HT was coated on the zinc oxide nanowires by the spin coating to form an organic-inorganic heterogeneous interface of the gas sensor for detecting ammonia gas. The thicknesses of the P3HT were around 462 nm, 397 nm, and 277 nm when the speeds of the spin coating were 4000 rpm, 5000 rpm, and 6000 rpm, respectively. The electrical properties and sensing characteristics of the gas sensing device at room temperature were evaluated by Hall effect measurement and the sensitivity of detecting ammonia gas. The results of Hall effect measurement for the P3HT-ZnO nanowires semiconductor with 462 nm P3HT film showed that the carrier concentration and the mobility were 2.7 × 1019 cm−3 and 24.7 cm2∙V−1∙s−1 respectively. The gas sensing device prepared by the P3HT-ZnO nanowires semiconductor had better sensitivity than the device composed of the ZnO film and P3HT film. Additionally, this gas sensing device could reach a maximum sensitivity around 11.58 per ppm. View Full-Text
Keywords: poly(3-hexylthiophene); zinc oxide nanowire; gas sensor; ammonia gas poly(3-hexylthiophene); zinc oxide nanowire; gas sensor; ammonia gas
►▼ Show Figures 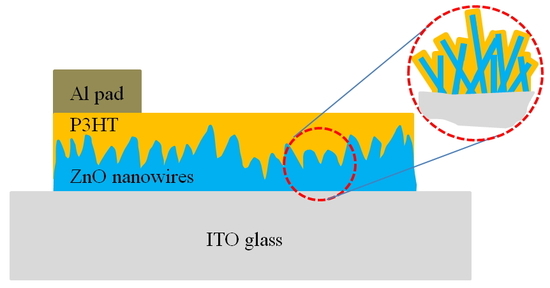