Increasing the Intensity over Time of an Electric-Assist Bike Based on the User and Route: The Bike Becomes the Gym

Luis A. Guerrero 1 and

Obesity is one of the most serious public health challenges of the 21st century and it is a threat to the life of people according to World Health Organization. In this scenario, family environment is important to establish healthy habits which help to reduce levels of obesity and control overweight in children. However, little efforts have been focused on helping parents to promote and have healthy lifestyles. In this paper, we present two smart device-based notification prototypes to promote healthy behavior with the aim of avoiding childhood overweight and obesity. The first prototype helps parents to follow a healthy snack routine, based on a nutritionist suggestion. Using a fridge magnet, parents receive graphical reminders of which snacks they and their children should consume. The second prototype provides a graphical reminder that prevents parents from forgetting the required equipment to practice sports. Prototypes were evaluated by nine nutritionists from three countries (Costa Rica, Mexico and Spain). Evaluations were based on anticipation of use and the ergonomics of human–system interaction according to the ISO 9241-210. Results show that the system is considered useful. Even though they might not be willing to use the system, they would recommend it to their patients. Based on the ISO 9241-210 the best ranked features were the system’s comprehensibility, the perceived effectiveness and clarity. The worst ranked features were the system’s suitability for learning and its discriminability. View Full-Text
Keywords: ubiquitous computing; health; human-centered computing ubiquitous computing; health; human-centered computing
►▼ Show Figures 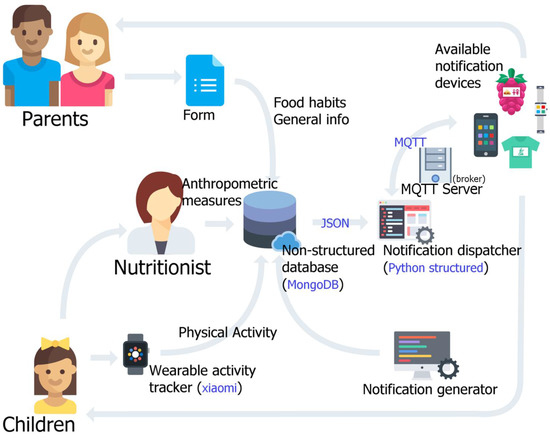