Multisensory System for the Detection and Localization of Peripheral Subcutaneous Veins

This work deals with robot-sensor network cooperation where sensor nodes (beacons) are used as landmarks for Range-Only (RO) Simultaneous Localization and Mapping (SLAM). Most existing RO-SLAM techniques consider beacons as passive devices disregarding the sensing, computational and communication capabilities with which they are actually endowed. SLAM is a resource-demanding task. Besides the technological constraints of the robot and beacons, many applications impose further resource consumption limitations. This paper presents a scalable distributed RO-SLAM scheme for resource-constrained operation. It is capable of exploiting robot-beacon cooperation in order to improve SLAM accuracy while meeting a given resource consumption bound expressed as the maximum number of measurements that are integrated in SLAM per iteration. The proposed scheme combines a Sparse Extended Information Filter (SEIF) SLAM method, in which each beacon gathers and integrates robot-beacon and inter-beacon measurements, and a distributed information-driven measurement allocation tool that dynamically selects the measurements that are integrated in SLAM, balancing uncertainty improvement and resource consumption. The scheme adopts a robot-beacon distributed approach in which each beacon participates in the selection, gathering and integration in SLAM of robot-beacon and inter-beacon measurements, resulting in significant estimation accuracies, resource-consumption efficiency and scalability. It has been integrated in an octorotor Unmanned Aerial System (UAS) and evaluated in 3D SLAM outdoor experiments. The experimental results obtained show its performance and robustness and evidence its advantages over existing methods. View Full-Text
Keywords: robot-sensor network cooperation; SLAM; sensor networks robot-sensor network cooperation; SLAM; sensor networks
►▼ Show Figures 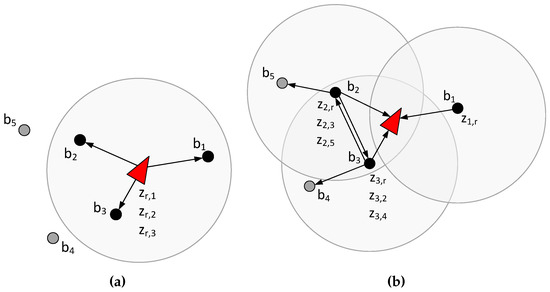