Towards a Semantic Web of Things: A Hybrid Semantic Annotation, Extraction, and Reasoning Framework for Cyber-Physical System
Next Article in Special Issue

Uncertainty Analysis in Humidity Measurements by the Psychrometer Method

The onset of the internet of things (IoT) and virtual reality (VR) demands the development of flexible, portable devices [1,2]. These devices will require flexible, low power consumption, low cost humidity sensors [3,4,5]. Thus far, various materials, including polymers [6,7,8], metal oxides [9,10,11], porous materials [12,13,14], and nano-materials [15,16], have been investigated for advanced humidity sensors. Unlike conventional rigid materials, flexible detection objects have the potential to accelerate the realization of flexible electronics and open a new development path for various humidity sensors for IoT and VR applications [17,18]. Recently, two-dimensional (2D) materials such as graphene and graphene oxide (GO) have been studied intensively due to their extraordinary flexibility and high surface-area-to-volume ratios [19,20,21,22,23,24,25,26,27]. In particular, GO has an advantage over graphene. Whereas graphene has hydrophobic properties, GO has hydrophilic properties, making it beneficial for detecting polar gases like water molecules [28,29]. Furthermore, GO can be combined with flexible materials to create highly flexible hybrid structures with excellent gas sensing properties.
In fact, several approaches have been investigated for this purpose via implementing adhesive intermediates between GO and selected objects for better adhesion [30,31,32] Meanwhile, power consumption during both operational and standby conditions is another important concern since advanced humidity sensors are often adapted for mobile devices whose functions are highly limited with respect to power consumption and battery capacity [33]. As such, there is a need for low power consumption sensing mechanisms that can be demonstrated via capacitive mode. Compared to conventional conductivity or resistivity sensing, capacitive sensing can dramatically reduce power consumption during standby and operation modes [34]. In addition, it was reported that the capacitive type is less affected by the temperature variation than the resistive type [35]. Finally, this method is cost-effective since GO can be easily and cheaply mass-produced, and silk fiber (SF) can be coated with GO without any help from adhesive intermediates [36]. In this work, GO-coated SF is presented for flexible and wearable applications unlike conventional solid detection materials. The quality and quantity of the GO were controlled by varying the electrification force on the SF, and they were characterized by using an optical microscope, Raman spectroscopy, scanning electron microscopy (SEM), and LCR meter.

GO, dispersed with a concentration of 0.1 wt % (1 mg/mL) in DI water, is negatively charged due to the oxygen functional group attached to the GO. In contrast, an SF surface tends to be positively charged due to static electricity. The static electricity occurs due to an electrical charge imbalance on the SF surface, which has a high electrical resistance to the charged carrier. The magnitude of the static electric force on the SF surface varies depending on the tendency of the electrons to move from the SF to another material when the SF contacts and separates from that material (Table S1).
Figure 1a shows the relative tendency to lose (or gain) electrons on the surface, which eventually becomes positively (or negatively) charged when two different materials contact and separate. The material on the left tends to lose electrons and become positively charged, while that on the right tends to gain electrons and become negatively charged. Based on this phenomenon, the magnitude of the positive charge force on the SF can be controlled, which in turn enables the negatively charged GO coating on the SF to be controlled [37]. Various SFs with and without GO coatings at various conditions are shown in Figure 2. SG, SS, SA, and SL represent the SFs that were rubbed against a glass bar, nothing (control sample), aluminum foil, and latex gloves, respectively, for 3 min before submerging the processed SF in the GO solution (Figure S1); here the 3 min duration was considered sufficient to change the surface conditions. SW represents the SF that was submerged in the DI water instead of the GO solution (Figure S1).

In summary, flexible silk fiber (SF) was coated with graphene oxide (GO) via electrostatic force without adhesive intermediates. It was found that the electrostatic force, i.e., the adhesion force, between the GO and SF could be controlled. The GO was uniformly and seamlessly coated on the SF in a large area, which was characterized by optical image, secondary electron microscopy (SEM), energy-dispersive X-ray spectroscopy (EDS), and a Raman analysis. In addition, the electrical properties of the GO-coated SF were investigated as a function of coating time and temperature. The GO-coated SF showed the feasibility of capacitive humidity sensor, unlike the intact SF. This approach allows the humidity sensor to take advantage of GO’s excellent sensing properties and flexibility. Therefore, it is expected that this method will enable the production of flexible, low power consumption devices at relatively low costs.

The following are available online at www.mdpi.com/1424-8220/17/2/407/s1: Table S1. Triboelectric table predicting which will become positive vs. negative and how strong the effect will be. Figure S1. Schematic drawing of various GO coating process on SF. For comparison, DI-soaked SF (SW) was also prepared. Figure S2. (a) and (b) SEM images of GO-coated SF (SL) (scale bar: 1μm). Figure S3. EDS images of GO-coated SF (SL) along with the quantitative data. (a) SEM image of the SL, (b) the elemental maps using both C K and O K, (c) C K, and (d) O K, (scale bar : 20um). Figure S4. Resistance of GO-coated SF at various conditions as a function of distance; SFs were rubbed with each material (glass, aluminum, and latex) before soaking in GO solution. 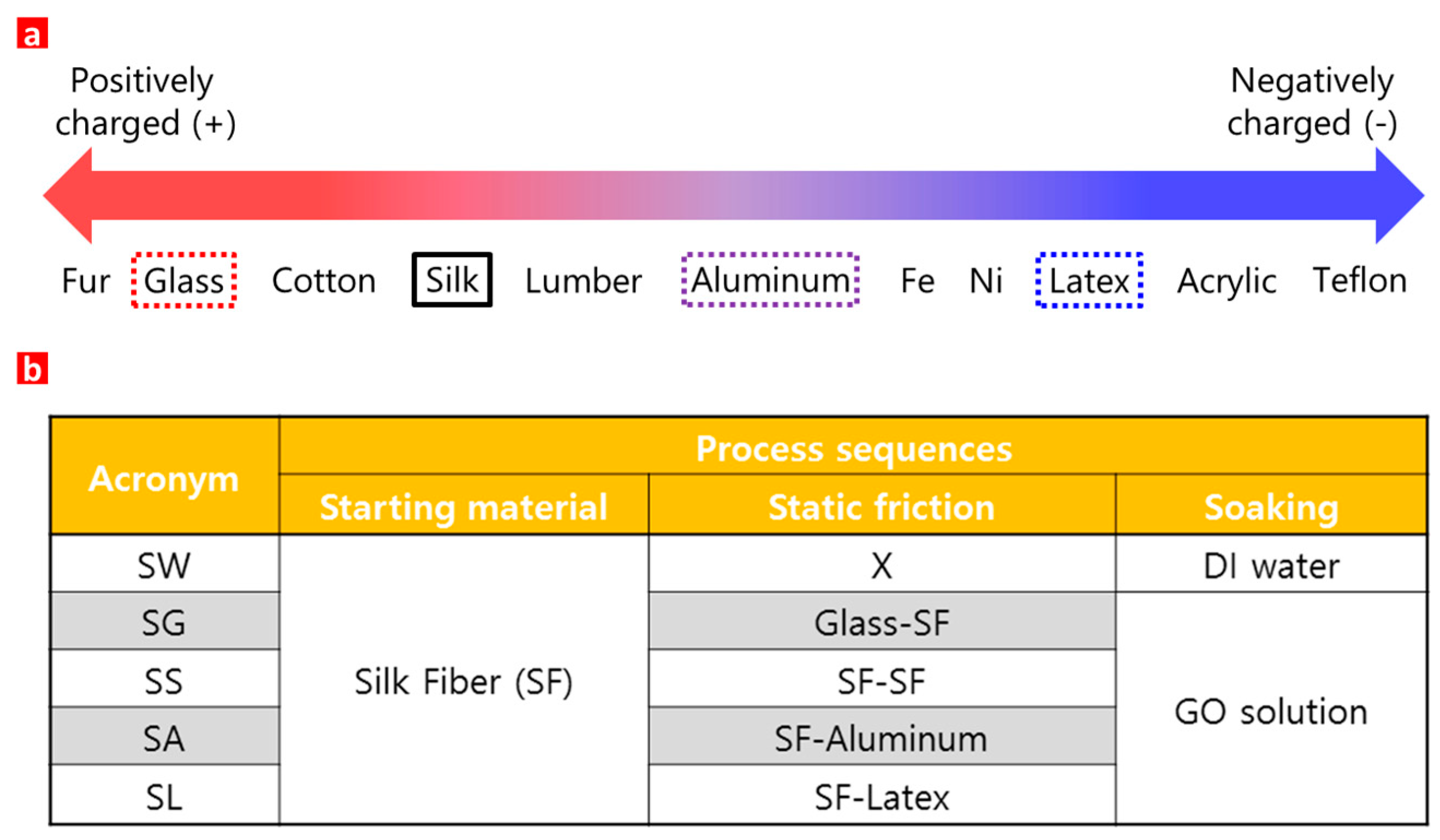 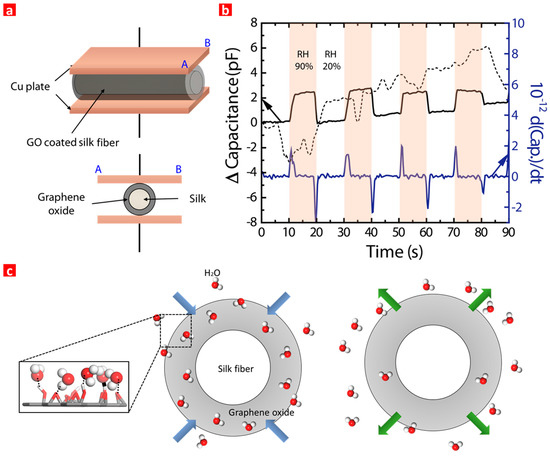