Figure 1 shows the physical degradation model of foggy image acquisition. The light reflected by the object is absorbed and scattered by fog particles in the atmosphere, and arrives at the camera sensor. Therefore, the greater the distance between the object and the camera is, the greater the atmospheric degradation becomes. The foggy image g is defined according to the Koschmieder model [23] as where represents the pixel coordinate, the fog-free image, and the constant A the global atmospheric light. represents the transmission coefficient at pixel , and can be expressed as where represents the scattering coefficient of the atmosphere, and the depth between the scene point and the camera. From (1) , an intuitive estimation of the fog-free image is given as
The defogged image is obtained by substituting the estimated A and into (3). is the lower bound of , which is set to an arbitrary value to avoid the zero in the denominator.

Most single-image-based defogging algorithms set the atmospheric light A to an arbitrary constant or to the brightest pixel value in the image under the assumption that the fog color is white [5,6,7]. Since these methods do not estimate the accurate atmospheric light, the quality of defogged images is degraded. In this paper, the atmospheric light A is estimated using the color line-based estimation method that was originally proposed by Sulami et al. [25].
In (1), the fog-free image can be expressed as where surface shading is a scalar value indicating the magnitude of the reflected light, and surface albedo is an RGB vector representing the chromaticity of the reflected light. In general, when a natural image is divided into small patches, the surface albedo and transmission of each image patch are approximately constant. Therefore, using this characteristic and (4), the foggy image formation model in (1) can be expressed as follows: where represents the transmission value of the i-th image patch, the surface albedo of the patch. To create color lines in the RGB color space using image patches with the same surface albedo and transmission, image patches satisfying (5) are selected using principal component analysis (PCA). The strongest principal axis of the image patch should correspond to the orientation of the color line, and there should be a single significant principal component. Additionally, the color line of the image patch should not pass the origin in RGB space, and the image patch should not contain an edge. The color lines are generated using image patches that satisfy these conditions, and the orientation and magnitude of vector A is estimated.

To generate the transmission of a stereo image pair, the disparity map is estimated using the combined local–global approach with total variation (CLG–TV) [26]. The CLG–TV approach integrates Lucas–Kanade [27] and Horn–Schunck [28] models to estimate motion boundary-preserved optical flow using a variational method. The norm error function of the Horn–Schunck model is defined as where represents the residual between the left and right images as where is the optical flow to estimate with the initial value , and the left and right images are respectively given as where , can be minimized by solving the Euler–Lagrange equation using Jacobi iteration. To make the estimated optical flow as uniform as possible in a small region, the residual in (6) is substituted by the Lucas–Kanade error function where w represents the weighting factor. is minimized solving a least-squares problem. Based on the Lucas–Kanade model, the total error of the same window is minimized. The following error function combines Horn–Schunck and Lucas–Kanade models.
To solve the over-smoothing problem in motion boundaries regions, the norm is minimized instead of the norm.
To minimize the CLG–TV error function, we use an alternative Horn–Schunck model [29] where is decomposed into three terms, as shown below.
is minimized in the point-wise manner, whereas and are minimized using the procedure proposed by Chambolle [30]. In this paper, we calculated the disparity map for only u from the stereo image.
Figure 3 shows the result of the transmission map estimation and fog removal using a stereo input image pair. Since the disparity map is generated using the distorted features by foggy component, the initially estimated transmission map is not sufficiently clear.

To evaluate the performance of the proposed defogging method, experimental results are compared with those of the state-of-the-art defogging algorithms. Figure 7a shows a set of test foggy images, Figure 7b–f respectively shows results of He’s method [7], Ancuti’s method [14], Meng’s method [13], Berman’s method [15], and the proposed method.
In Cityscape, River1, and River2 results, Figure 7b,d shows that color distortion and low saturation artifacts occur in the sky region because the atmospheric light is not accurately estimated. Figure 7c shows that the color of the sky region is distorted and the color around the building is faded because the same amount of fog is removed without considering spatially different depth information. Figure 7e shows a slight amount of color distortion since the initial transmission map is regularized by using Gaussian Markov random fields with only local neighbors. Figure 7f shows that the defogged result is clearer than any other method in the sky region, and the color contrast is increased.
In Road1 and Road2 results, Figure 7c shows that the color around the road is faded and distorted because it does not consider depth information. Figure 7e shows that the color tends to be oversaturated when the atmosphere light is significantly brighter than the scene. Figure 7b,d shows excellent defogging results because the color of artificially added fog is mostly white, so the transmission map is well estimated by the DCP-based defogging algorithm. Figure 7f shows a well-defogged result without color distortion or saturation. Experimental results demonstrated that the proposed algorithm outperforms existing algorithms in terms of both fog removal and color preservation.
Table 1 shows two quantitative measures for objective evaluation, including no-reference image quality metric for contrast distortion (NIQMC) [32] and entropy for measuring contrast of the defogged results. The higher NIQMC value indicates superior color contrast and edge of the image. A high entropy value indicates that the average amount of information in the image is high. In other words, a greater amount of information about the edges or features results in better color contrast. Based on Table 1, the highest values in each image are shown in bold and the proposed method performs better than other existing methods.

The proposed stereo-based defogging algorithm is particularly suitable for a dual camera system that has attracted increasing attention in the field of robot vision, autonomous driving, and high-end smartphones. Figure 8 shows the block diagram of the proposed defogging algorithm applied to an asymmetric dual camera system. To estimate the depth information, features in the stereo foggy image pair are first matched, and the scale of the longer focal length image is then corrected. The proposed defogging method is applied to the overlapped regions of two images with different focal lengths. To remove the fog in the non-overlapping region, a single image-based defogging method is first used, and color distortion is then corrected using histogram matching with reference to the overlapped region.
Figure 9 demonstrates that the proposed algorithm can be applied to an asymmetric dual camera system. For the experiment, Figure 9b is obtained by cropping the center region of Figure 9a. As a result, Figure 9a,b can be considered as a stereo pair of input foggy images with different focal lengths. Figure 9c shows the defogged result of Figure 9a by the single image defogging method. Figure 9d shows the defogged result of Figure 9b by the stereo image defogging method proposed in this paper. Figure 9e shows the stitching result of Figure 9c,d. Based on the result, the proposed stereo-based method can remove fog while preserving the original color information in the asymmetric dual camera system.

In this paper, a stereo defogging algorithm is proposed to accurately estimate the transmission map based on the depth information. The major contribution of this work is twofold: (i) The stereo-based iterative defogging process can provide greatly enhanced results compared with existing state-of-the-art methods; and (ii) the framework of the stereo-based algorithm is particularly suitable for a dual camera system that is embedded in a high-end consumer smartphone. The proposed method first obtains the disparity map by estimating optical flow from the stereo foggy image pair, and generates the initial transmission map using the disparity. The defogged image is restored by generating the transmission map and estimating atmospheric light A based on the color line theory. By repeating the set of optical flow estimation, transmission map generation, and defogging until convergence, significantly improved defogged results were obtained. Experimental results show that the proposed method successfully removed fog without color distortion, and the transmission map and the defogged image were iteratively refined. The proposed method can be used as a pre-processing step for an outdoor image analysis function in an intelligent video surveillance system, autonomous driving, and asymmetric dual camera in a high-end smartphone. 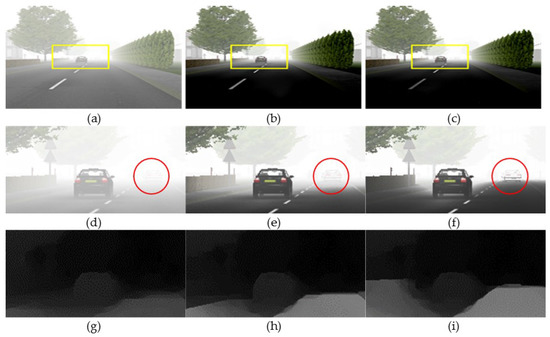 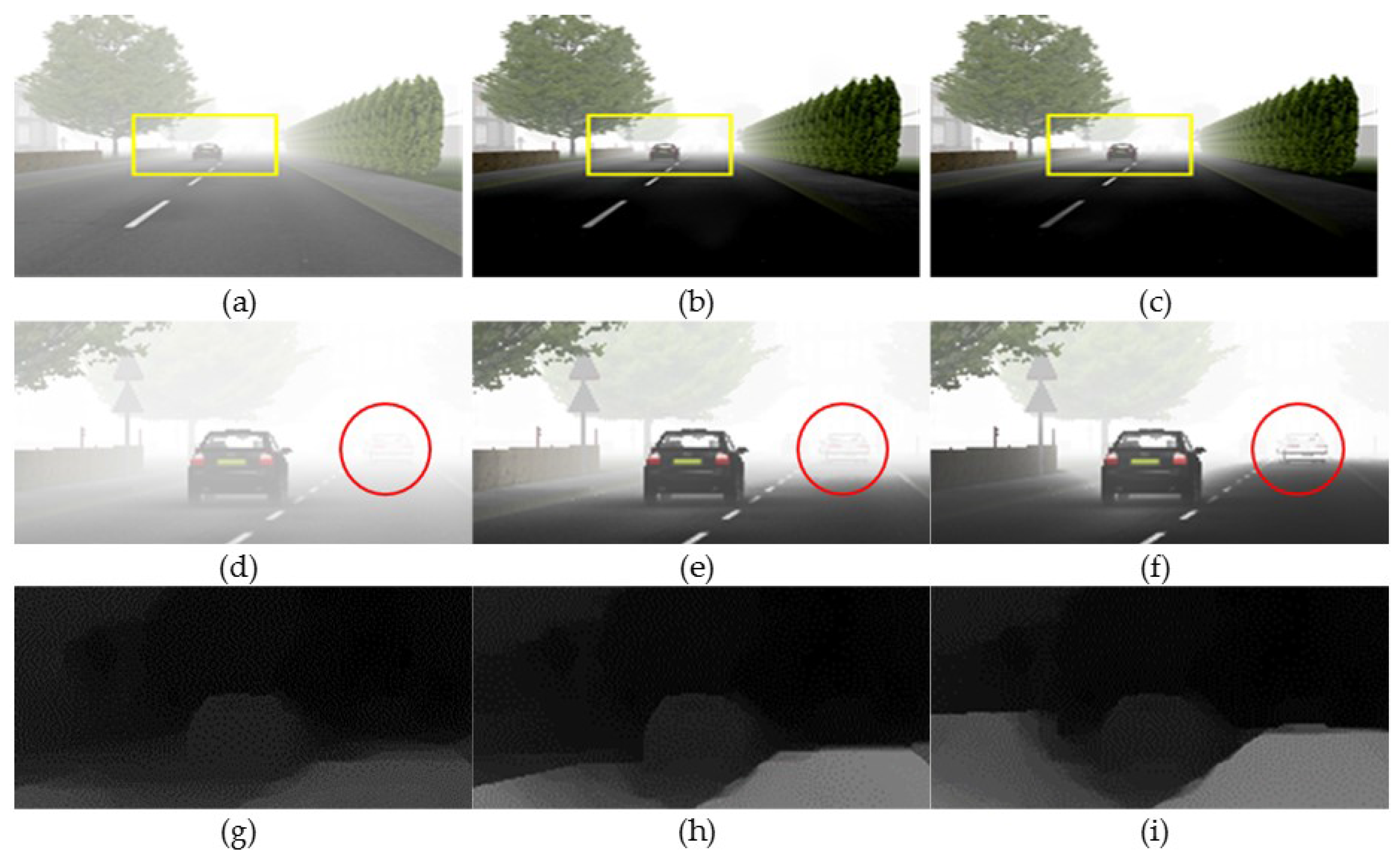 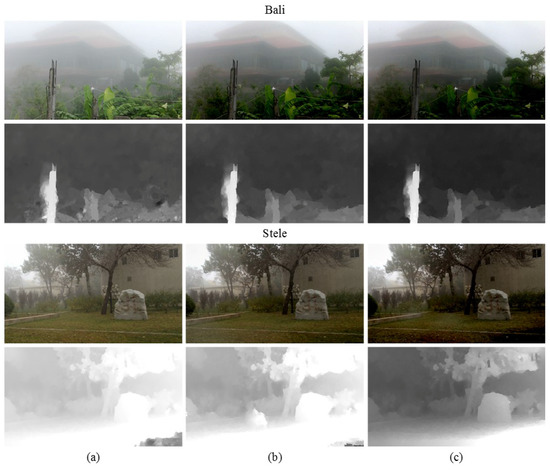 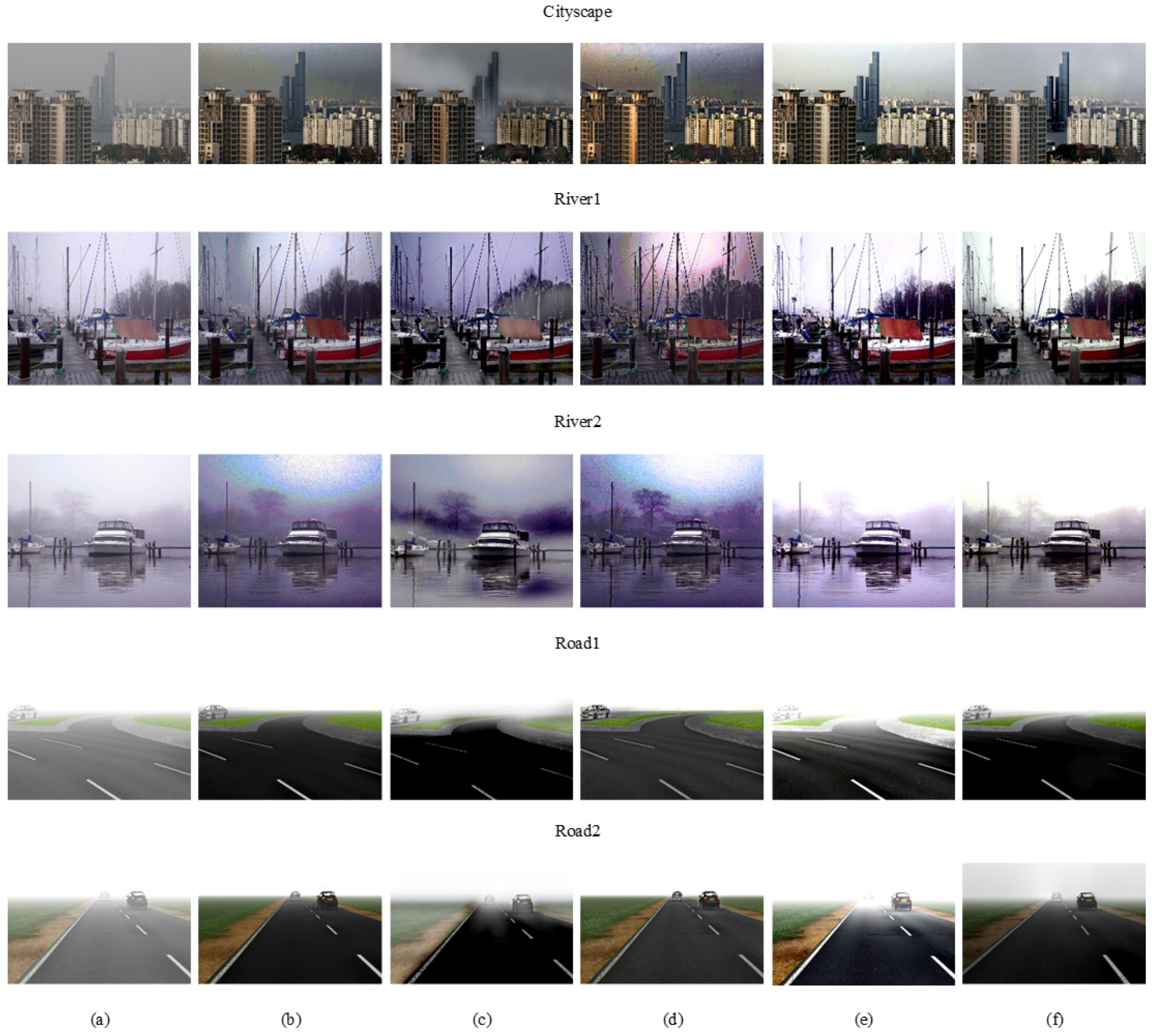 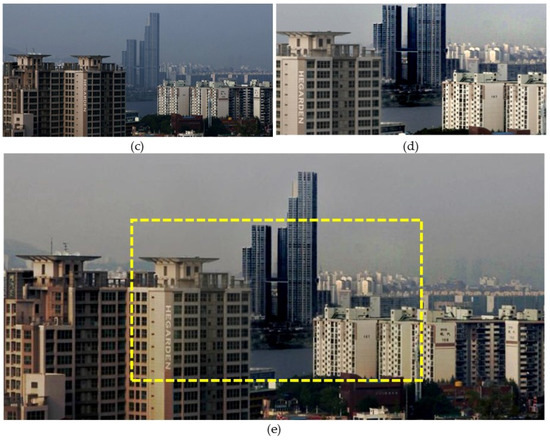 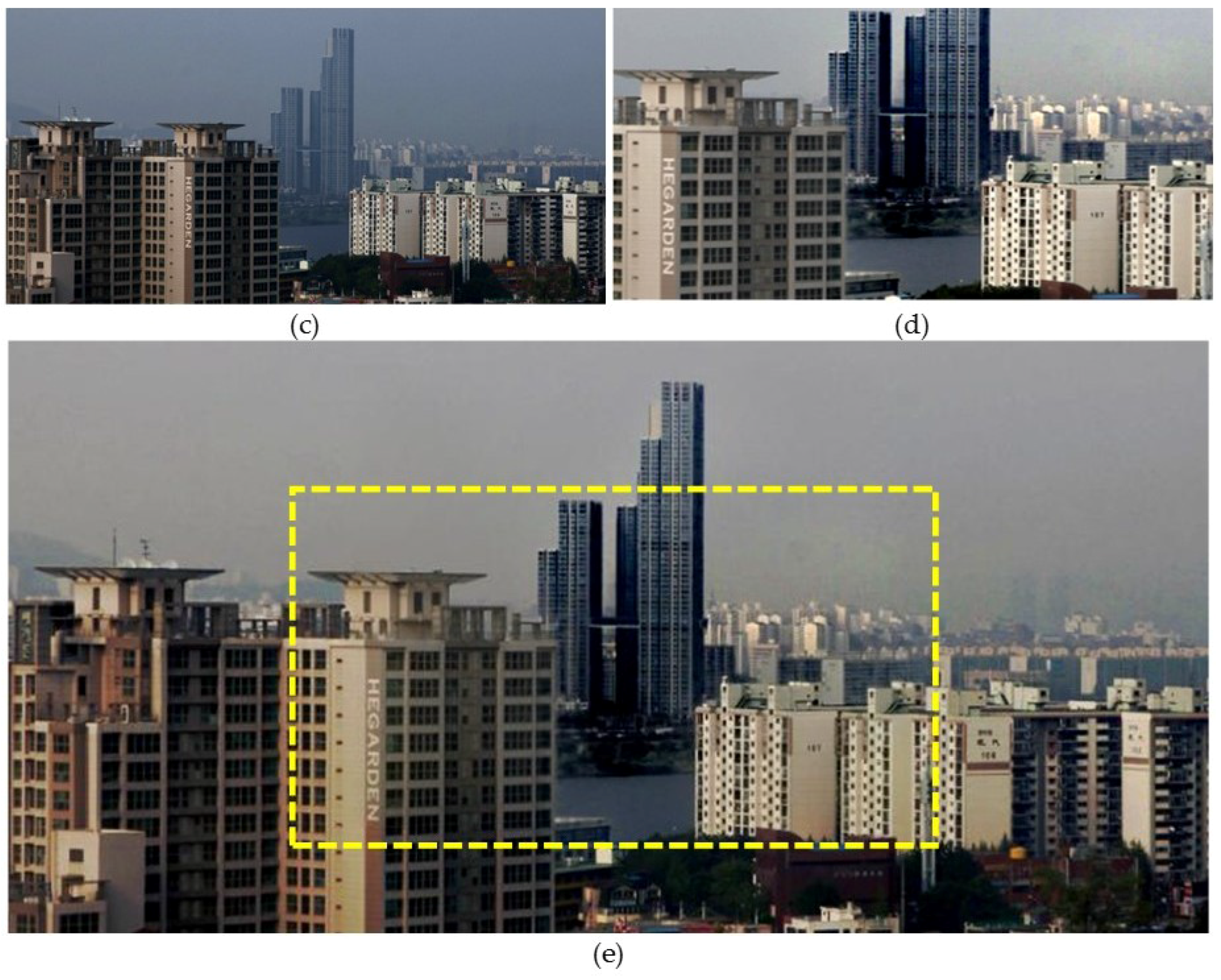