Organophosphorous Pesticide Detection in Olive Oil by Using a Miniaturized, Easy-to-Use, and Cost-Effective Biosensor Combined with QuEChERS for Sample Clean-Up

Lactic acid is a relevant analyte in the food industry, since it affects the flavor, freshness, and storage quality of several products, such as milk and dairy products, juices, or wines. It is the product of lactose or malo-lactic fermentation. In this work, we developed a lactate biosensor based on the immobilization of lactate oxidase (LOx) onto N,N′-Bis(3,4-dihydroxybenzylidene) -1,2-diaminobenzene Schiff base tetradentate ligand-modified gold nanoparticles (3,4DHS–AuNPs) deposited onto screen-printed carbon electrodes, which exhibit a potent electrocatalytic effect towards hydrogen peroxide oxidation/reduction. 3,4DHS–AuNPs were synthesized within a unique reaction step, in which 3,4DHS acts as reducing/capping/modifier agent for the generation of stable colloidal suspensions of Schiff base ligand–AuNPs assemblies of controlled size. The ligand—in addition to its reduction action—provides a robust coating to gold nanoparticles and a catalytic function. Lactate oxidase (LOx) catalyzes the conversion of l-lactate to pyruvate in the presence of oxygen, producing hydrogen peroxide, which is catalytically oxidized at 3,4DHS–AuNPs modified screen-printed carbon electrodes at +0.2 V. The measured electrocatalytic current is directly proportional to the concentration of peroxide, which is related to the amount of lactate present in the sample. The developed biosensor shows a detection limit of 2.6 μM lactate and a sensitivity of 5.1 ± 0.1 μA·mM−1. The utility of the device has been demonstrated by the determination of the lactate content in different matrixes (white wine, beer, and yogurt). The obtained results compare well to those obtained using a standard enzymatic-spectrophotometric assay kit.
Keywords: Schiff base tetradentate ligand modified gold nanoparticles; lactate determination; enzymatic biosensor; gold nanoparticles; lactate oxidase biosensor Schiff base tetradentate ligand modified gold nanoparticles; lactate determination; enzymatic biosensor; gold nanoparticles; lactate oxidase biosensor

Hydrogen tetrachloroaurate (III) trihydrate (HAuCl4·3H2O, ≥99.9% trace metals basis) and l-(+)-lactic acid lithium salt 97% were obtained from Aldrich Chemical Co. (Milwaukee, WI, USA). Lactate oxidase (LOx, EC 232-841-6 from Pediococcus species) lyophilized powder was obtained from Sigma Chemical Co. (St. Louis, MO, USA). Stock solutions were prepared 200 U·mL−1 in 0.1 M phosphate buffer (pH 7.0) and stored at −30 °C. Under these conditions, the enzymatic activities remain stable for several weeks. The enzymatic assay kit for lactate determination (K-LATE 07/14) was purchased from Megazyme (Ireland). Other chemicals used in this work were reagent grade quality and used as received without further purification. MilliQ water (Millipore®, Darmstadt, Germany) was used throughout.
N,N′-Bis(3,4-dihydroxybenzylidene)-1,2-diaminobenzene (3,4DHS) was prepared as previously reported [35] by condensation of 1,2-phenylendiamine with the 3,4-dihydroxybenzaldehyde isomer in a 1:2 molar stoichiometric ratio. The resulting compound was recrystallized from hot methanol. Stock solutions of 3,4DHS (typically 2.0 mM) were prepared just prior to use by dissolving the solid in dimethylformamide.
All electrochemical measurements were carried out using an Autolab potentiostat/galvanostat type PGSTAT 302N (Eco Chemie, Utrecht, The Netherlands) using the software package GPES 4.9. Integrated screen-printed carbon electrodes (4 mm diameter, SPCEs) from DropSens were used. They include a silver pseudoreference electrode and a carbon counter electrode. A 1.5 mL home-made glass electrochemical cell was employed to carry out the measurements. All experiments were carried out in 0.1 M phosphate buffer (pH 7.0) at 25 °C.

3,4DHS–AuNPs were synthesized as previously reported [34] by mixing aqueous HAuCl4 with 3,4DHS solution, and chemical reduction was left to proceed for 24 h at room temperature. The 3,4DHS capped AuNPs thus formed were separated by centrifugation at 9000 rpm (7700 g) and washed with water to remove excess 3,4DHS.
The size and concentration of 3,4DHS–AuNPs were estimated from the ratio of absorbance measured at the surface plasmon band (~520 nm) and the absorbance at 450 nm, as described by Haiss et al. [36]. The particle size value was confirmed by transmission electron microscopy [34]. Thus, a stock solution of 17.7 nM (33 ± 3 nm) 3,4DHS–AuNPs was employed.

2.2.3. Determination of Lactate in Food Samples

Lactate was determined in food samples using the developed amperometric biosensor. Results were compared with those obtained using a commercial enzymatic assay kit following the procedure described by the manufacturer. White wine, beer, and yogurt were purchased in a local store and were analyzed by standard addition method without any pre-treatment other than dilution in 0.1 M phosphate buffer (pH 7.0).

3.2. Study of Common Interfering Substances on the Response of Lactate

One of the most important aspects to consider for any analytical application of biosensors is the study of the effect of potential interfering substances present in real samples. Therefore, to test the utility of the proposed biosensor in the determination of the lactate present in different real samples (such as white wine, beer and yogurt), a study of the influence of the most usual interfering substances that may be present in these samples was carried out. For this purpose, the biosensor response was obtained under the optimized experimental conditions in the absence and presence of different concentrations of tartaric acid, citric acid, ascorbic acid, acetic acid, glucose, fructose, methanol, and ethanol (Table 1). The presence of the potential interfering compounds—when they were at the same concentration as the analyte—did not affect the response, except in the case of ascorbic acid, where an increase of about 76% of the signal was observed. However, at lower concentrations, the presence of this compound did not show any effect. Therefore, these results suggest that the proposed device can be used to measure lactate concentrations in the presence of a variety of possible interfering substances. Moreover, other important analytical parameters such as sensitivity and stability compare favorably to other previously described lactate biosensors prepared in a similar manner [28,29,39,40]. However, in this work, a conjugate nanomaterial consisting of AuNPs with a reagent that has an electrocatalytic activity towards the oxidation of H2O2 has been obtained in a unique process for the first time. This conjugate (3,4DHS–AuNP) can be easily immobilized on a screen-printed electrode and combined with the enzyme LOx to prepare a biosensor that could determine lactate in real samples directly without previous treatment and without the need to add reagents to the sample. This is an advantage compared to other lactate biosensors prepared using different nanomaterials or electrocatalysts.

3.3. Determination of Lactate in Real Samples

Finally, the developed biosensor was applied to the determination of lactate in real food samples—in particular, wine, beer, and yogurt. The importance of lactate in dairy products is well known. Moreover, this analyte plays an important role in the quality of wines, since the amount of lactic, malic, citric or succinic acid in wines is important for the provision of a mild and pleasant acidity.
Samples (25 μL of wine, 40 μL of beer, or 10 μL of yogurt) were diluted in 10 mL of 0.1 M phosphate buffer (pH 7.0), and the standard addition method was used in order to minimize matrix effects. The results obtained were compared to those obtained by a commercial enzymatic assay kit based on l-lactate dehydrogenase/glutamate–pyruvate transaminase and photometric measurement at 340 nm of NADH formed during the enzymatic reaction. The results are summarized in Table 2. The average lactate concentration value obtained for three measurements using different biosensors agrees well with that obtained by the commercial enzymatic kit, with the advantage that the experimental procedure is more rapid, direct, and economical when the biosensor is used.

Screen-printed carbon electrodes nanostructured with 3,4DHS–AuNPs assemblies are excellent electrocatalytic platforms for the oxidation of H2O2. Once these platforms are coupled to lactate oxidase, they result in reagent-less disposable biosensors for direct determination of lactate in different samples (wine, beer, and yogurt) without the need for tedious and time-consuming pretreatment steps, and with excellent sensitivity and selectivity. The resulting biosensors are stable, and retain their activity for more than one month. 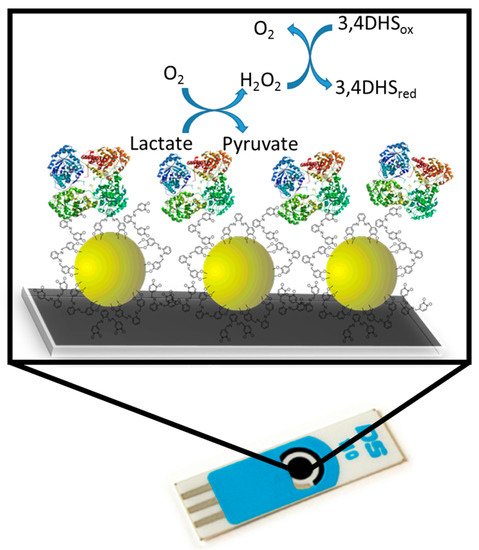 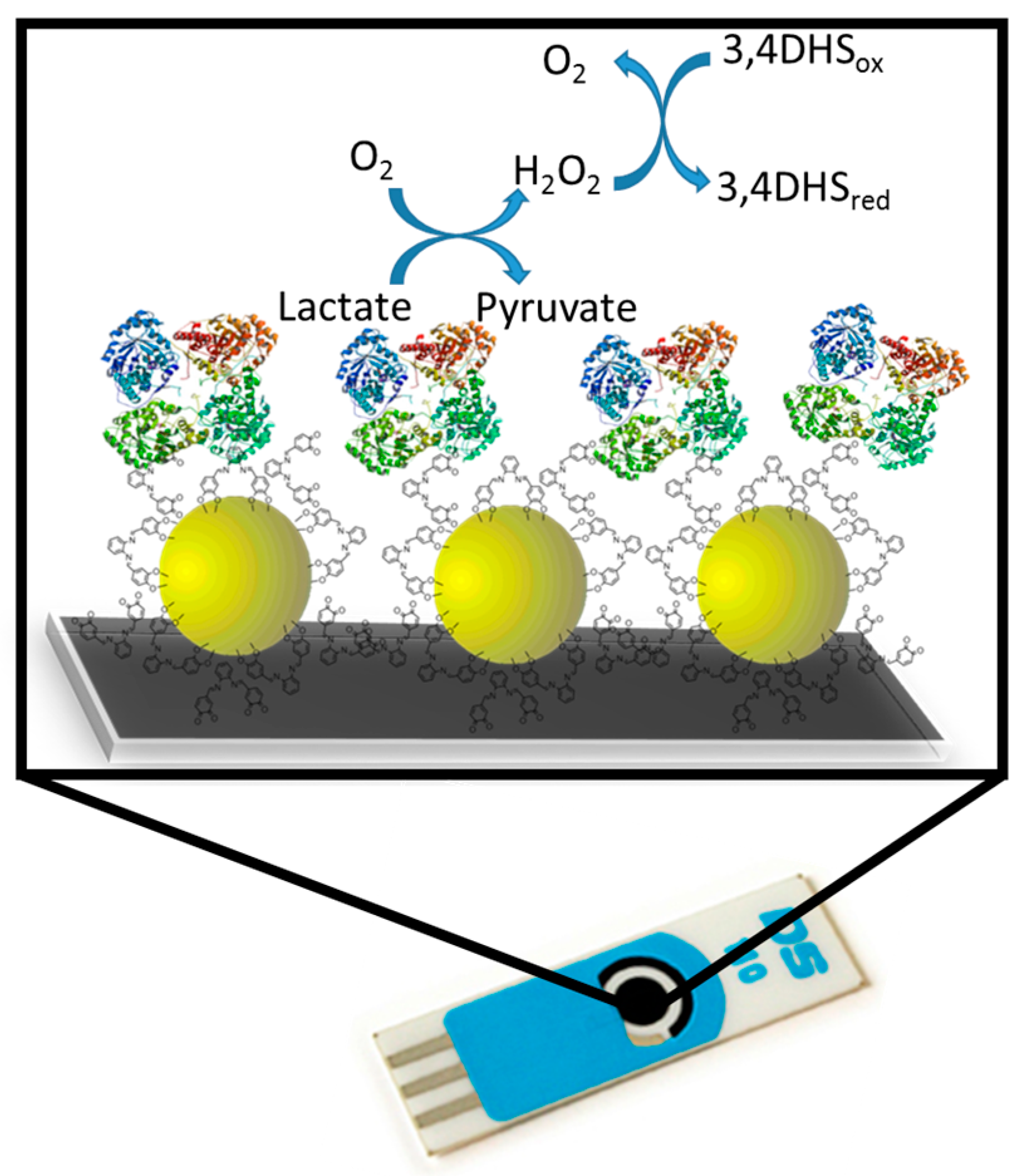 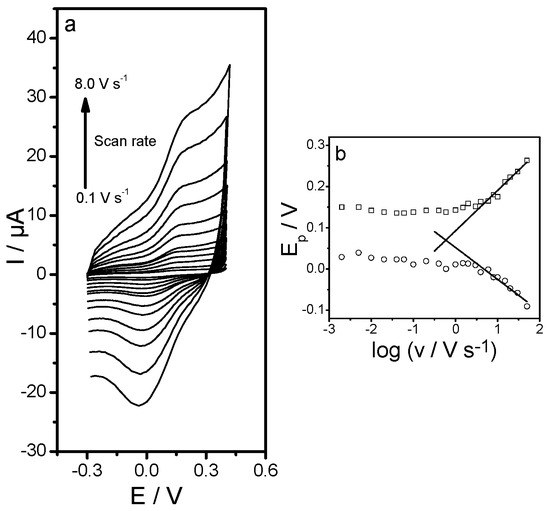 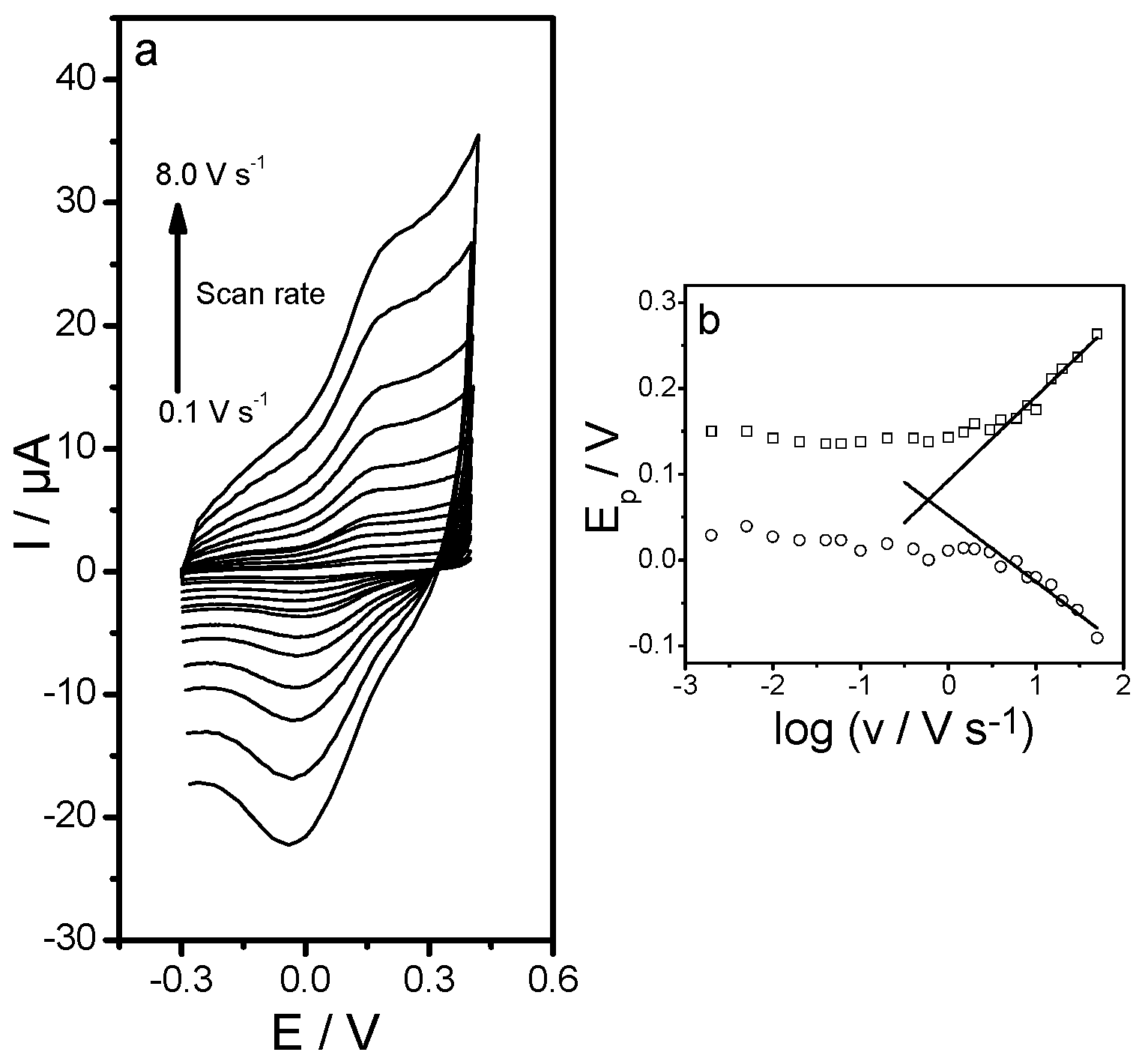 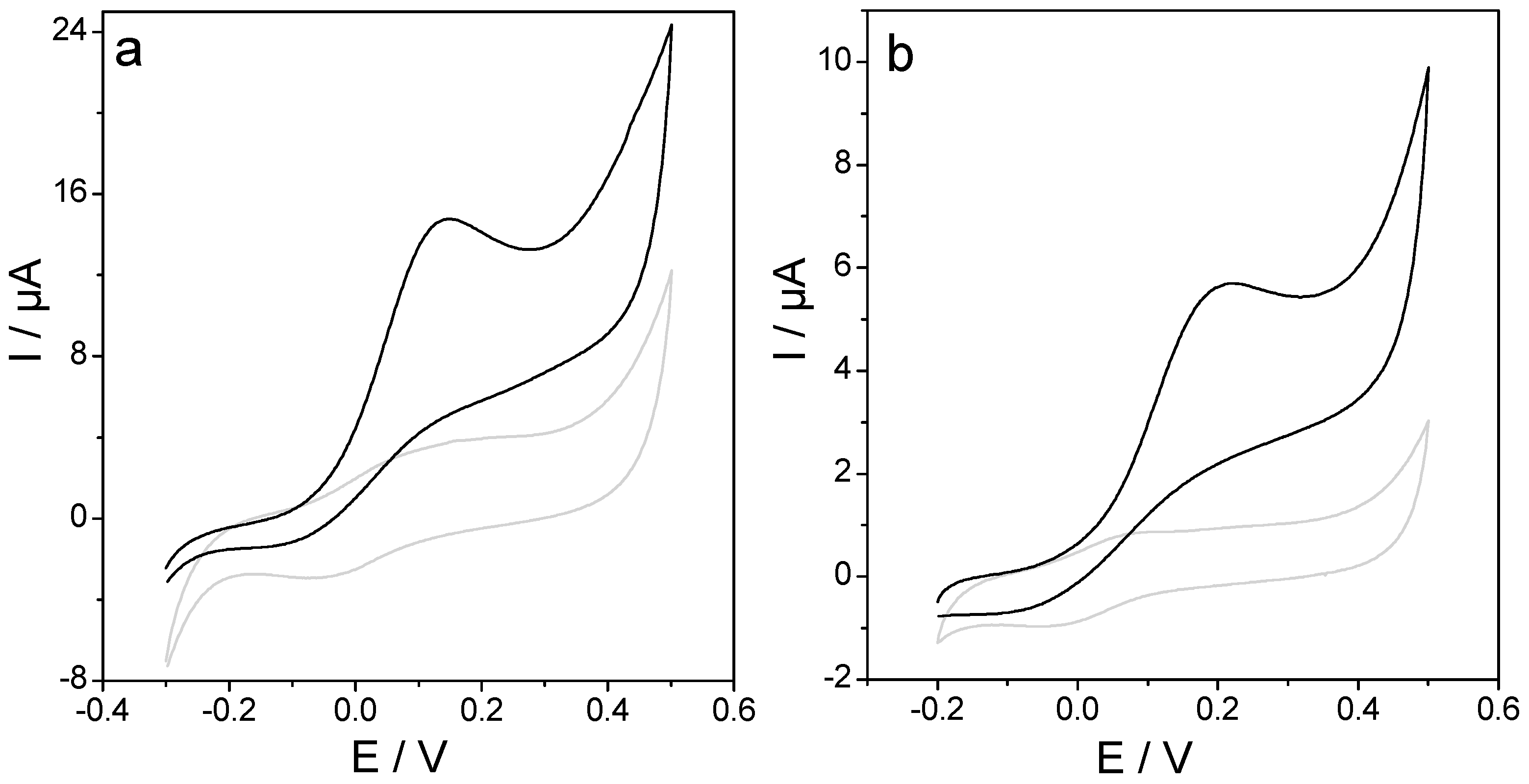 Table 2. Determination of lactate in different samples with the biosensor and with a commercial enzymatic assay kit.
1 SD: Standard deviation of three determinations.