On-Road Sensor Networks (ORSNs) play an important role in capturing traffic flow data for predicting short-term traffic patterns, driving assistance and self-driving vehicles. However, this kind of network is prone to large-scale communication failure if a few sensors physically fail. In this paper, to ensure that the network works normally, an effective fault-tolerance mechanism for ORSNs which mainly consists of backup on-road sensor deployment, redundant cluster head deployment and an adaptive failure detection and recovery method is proposed. Firstly, based on the N − x principle and the sensors’ failure rate, this paper formulates the backup sensor deployment problem in the form of a two-objective optimization, which explains the trade-off between the cost and fault resumption. In consideration of improving the network resilience further, this paper introduces a redundant cluster head deployment model according to the coverage constraint. Then a common solving method combining integer-continuing and sequential quadratic programming is explored to determine the optimal location of these two deployment problems. Moreover, an Adaptive Detection and Resume (ADR) protocol is deigned to recover the system communication through route and cluster adjustment if there is a backup on-road sensor mismatch. The final experiments show that our proposed mechanism can achieve an average 90% recovery rate and reduce the average number of failed sensors at most by 35.7%. View Full-Text
Keywords: on-road sensor network; fault tolerance; backup sensor deployment; route adjustment; cluster adjustment on-road sensor network; fault tolerance; backup sensor deployment; route adjustment; cluster adjustment
►▼ Show Figures 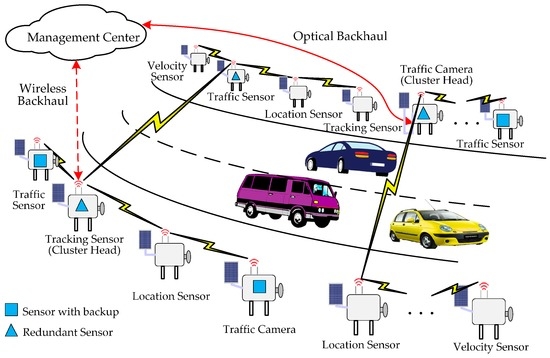