Localization is an essential issue for robot navigation, allowing the robot to perform tasks autonomously. However, in environments with laser scan ambiguity, such as long corridors, the conventional SLAM (simultaneous localization and mapping) algorithms exploiting a laser scanner may not estimate the robot pose robustly. To resolve this problem, we propose a novel localization approach based on a hybrid method incorporating a 2D laser scanner and a monocular camera in the framework of a graph structure-based SLAM. 3D coordinates of image feature points are acquired through the hybrid method, with the assumption that the wall is normal to the ground and vertically flat. However, this assumption can be relieved, because the subsequent feature matching process rejects the outliers on an inclined or non-flat wall. Through graph optimization with constraints generated by the hybrid method, the final robot pose is estimated. To verify the effectiveness of the proposed method, real experiments were conducted in an indoor environment with a long corridor. The experimental results were compared with those of the conventional GMappingapproach. The results demonstrate that it is possible to localize the robot in environments with laser scan ambiguity in real time, and the performance of the proposed method is superior to that of the conventional approach. View Full-Text
Keywords: laser scan ambiguity; graph-based SLAM; intrinsic and extrinsic camera calibration; hybrid method laser scan ambiguity; graph-based SLAM; intrinsic and extrinsic camera calibration; hybrid method
►▼ Show Figures 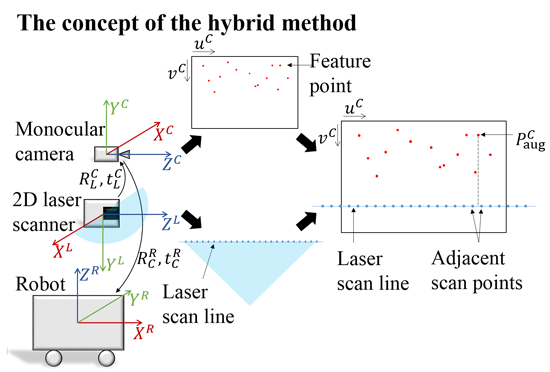