A novel spatio-temporal 2-dimensional (2-D) processing method that can jointly estimate the transmitting-receiving azimuth and Doppler frequency for bistatic multiple-input multiple-output (MIMO) radar in the presence of spatial colored noise and an unknown number of targets is proposed. In the temporal domain, the cross-correlation of the matched filters’ outputs for different time-delay sampling is used to eliminate the spatial colored noise. In the spatial domain, the proposed method uses a diagonal loading method and subspace theory to estimate the direction of departure (DOD) and direction of arrival (DOA), and the Doppler frequency can then be accurately estimated through the estimation of the DOD and DOA. By skipping target number estimation and the eigenvalue decomposition (EVD) of the data covariance matrix estimation and only requiring a one-dimensional search, the proposed method achieves low computational complexity. Furthermore, the proposed method is suitable for bistatic MIMO radar with an arbitrary transmitted and received geometrical configuration. The correction and efficiency of the proposed method are verified by computer simulation results.
Keywords: spatio-temporal 2-D processing; bistatic MIMO radar; transmitting-receiving azimuth; Doppler frequency spatio-temporal 2-D processing; bistatic MIMO radar; transmitting-receiving azimuth; Doppler frequency

According to Equation (2), we can construct three -dimensional data matrixes with the outputs of matched filters for L pulse cycle, they are as follows: where , , , , , .
Because , , where is the repetitive cycle of the pulse. Thus:
Here, .
According to Equation (4), the noise matrixes , and satisfy the following relationships:
Therefore, the cross-covariance matrixes of and are: where . The two formulas above show that the proposed method eliminates the effect of spatial colored noise because the time sampling information is used reasonably.
By eigenvalue decomposition (EVD) of , we can get: where and are the signal subspace and noise subspace, respectively. is a diagonal matrix composed of the P non-zero eigenvalues.
To get the noise subspace, is made to unit-diagonal-load using the diagonal-load method because the number of targets is unknown. That is:
is used in the derivation of the above formula.
Therefore: where is an arbitrary integer. Because is a number less than 1, Equation (16) approaches the noise subspace when approaches infinite. i.e.,:
Thus, the noise subspace can be acquired without EVD of and prediction of the number of targets. Equation (17) indicates that can converge to the noise subspace when . In fact, better performance can be acquired as long as is a smaller integer.
Accordingly, the optimization equation for the estimation of the target transmitting-receiving azimuth can be obtained based on the subspace theory:
From above, the judgment of the number of signal sources and the EVD of the data covariance matrix are not required in the estimation process of the algorithm. Therefore, this algorithm can greatly reduce the arithmetic complexity of the system.
Because , according to the property of the Kronecker product, can be further expressed as follows:
Substituting Equation (19) into Equation (18), we can obtain the following:
Because the first element of is 1, Equation (20) can be transformed into an optimization problem with constraints as follows: where is the -dimensional vector whose first element is 1 and other elements are 0.
By solving Equation (22), we can obtain the following:
According to Equation (23), searching for different in the range of , we can obtain maximal spectral peaks of the (1,1) element in , which correspond to DOA estimation values of the target. Then, substituting the DOA estimation values obtained above into Equation (24), we can obtain the corresponding target transmit steering vector .
Suppose that is the distance between the mth transmitting array element and the reference array element. Given , can be calculated using the following formula: where is the mth element of and .
Given that , the estimation of may be wrong according to Equation (25) because the estimation of may be ambiguous. Thus, can be acquired using a 1-dimensional search as follows:
To estimate the transmit steering vector , the 1-dimensional search can be performed according to Equation (26) in the range of . Its maximum value is the DOD estimated value , which can be automatically matched with the estimated receiving azimuth.

3.2. Estimation of the Doppler Frequency

Suppose that are non-zero singular values of the matrix , and are, respectively, the left-singular vector and right-singular vector corresponding to the non-zero singular values. The pseudo inverse of is defined as follows:
Then, the matrix can be constructed as:
Therefore, we can obtain:
Equation (29) means that is the eigenvalue of the matrix , and is the corresponding eigenvector.
In fact, because the number of repetitive pulses is limited, Equation (29) is not strictly true. However, the 2-D azimuth of the target and the Doppler frequency can be jointly estimated through the following optimization problem:
From Equation (30), the transmitting-receiving azimuth and Doppler frequency are separable. The 2-D azimuth of the target can be obtained through the method proposed in Section 3.1. Meanwhile, given that the derivative of the target function of Equation (30) with respect is zero, the estimated Doppler frequency can be obtained by minimizing the target function:
Therefore, substituting the estimated transmitting-receiving azimuth into the formula above, we can obtain the target Doppler frequency, and the acquired target Doppler frequency can be automatically matched with the transmitting-receiving azimuth.
During parameter estimation, only the time rotation factor is used; the array rotation invariance is not used. No special requirement for the array structure is required in this method, which is applied to the condition of the arbitrary structure of the transmitting and receiving array. For the algorithm proposed in [13], when and , an error in the angle estimation may occur, as is the case for Equation (25). Thus, it is only suitable for bistatic MIMO radars whereby and . Therefore, the requirement for the distance of the transmitting and receiving array in the proposed method is lower than that of the algorithm proposed in reference [13], and this method is applicable over a wider range.

In the simulation process, the Signal-to-Noise Ratio (SNR) is 5 dB; ; the number of pulses is , where ; KHz. Suppose that there are three targets within the same distance unit in the background with Gaussian colored noise, the transmitting-receiving azimuth and the Doppler frequency are , and , and the transmitting array elements emit an orthogonal phase code signal.

4.1. Simulation 1: The Restrained Ability for Spatial Gaussian Colored Noise in the Proposed Method

The simulation mainly inspects the joint estimation result for target parameters in a background with Gaussian colored noise using the proposed method. It is assumed that the transmitting and receiving arrays are all uniform linear arrays and that the other simulation conditions are the same as in simulation 1. Figure 1 and Figure 2 present, respectively, the joint estimation results for target parameters using the algorithm in reference [8] and the method proposed here. 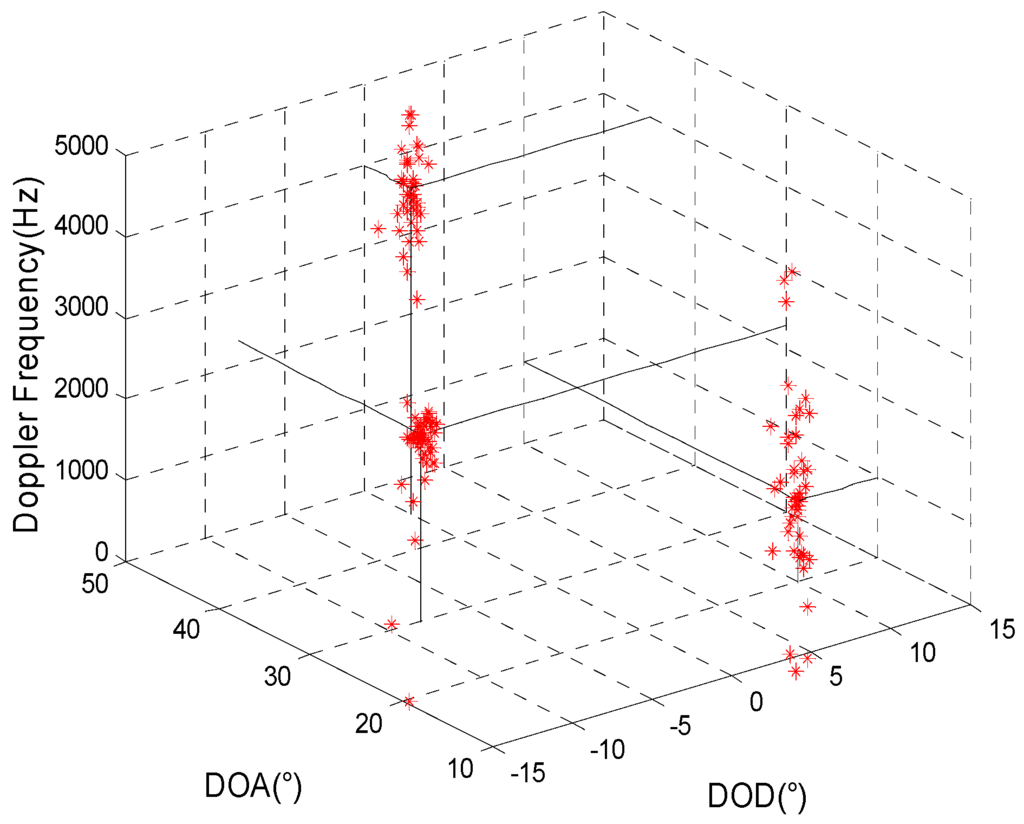 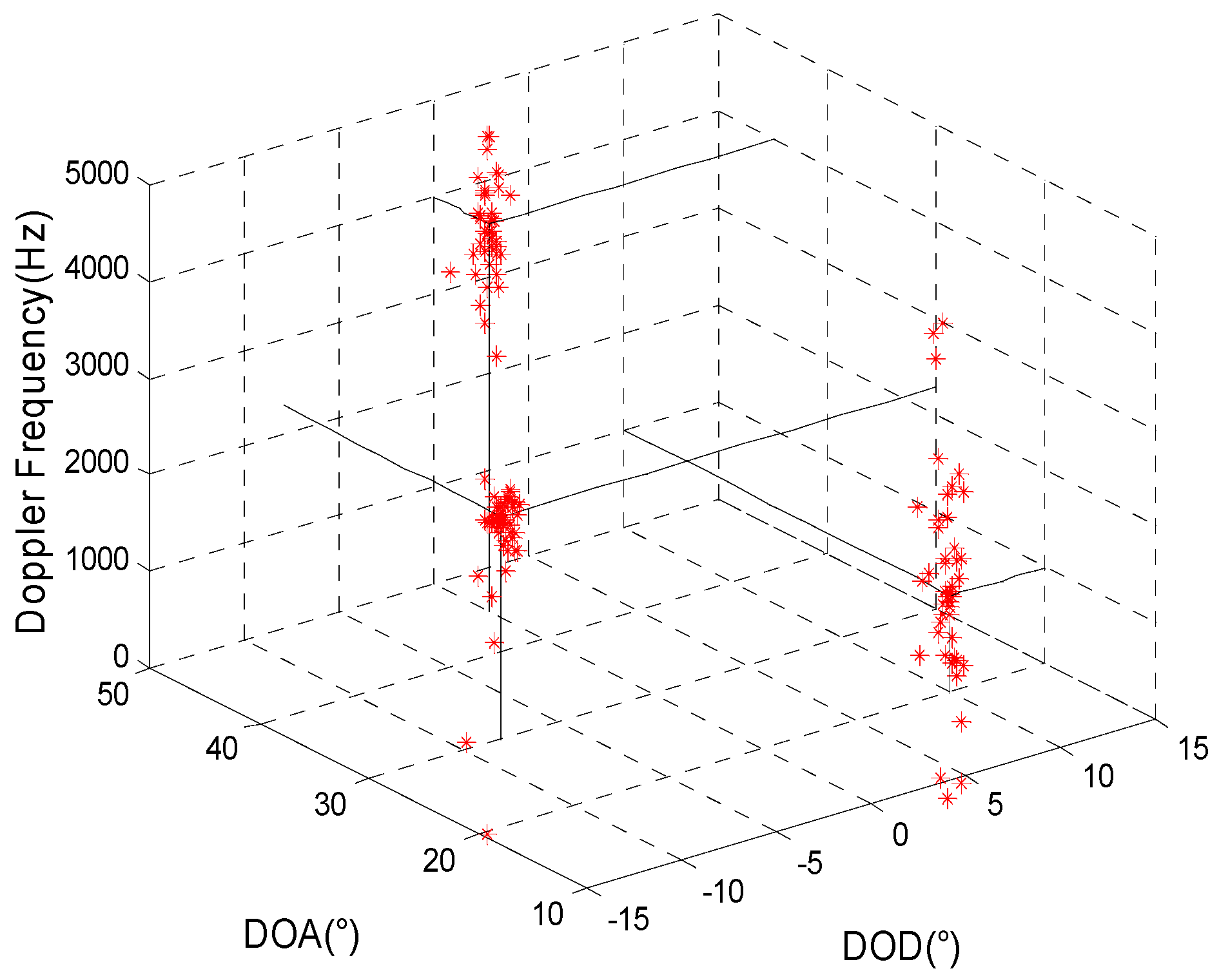 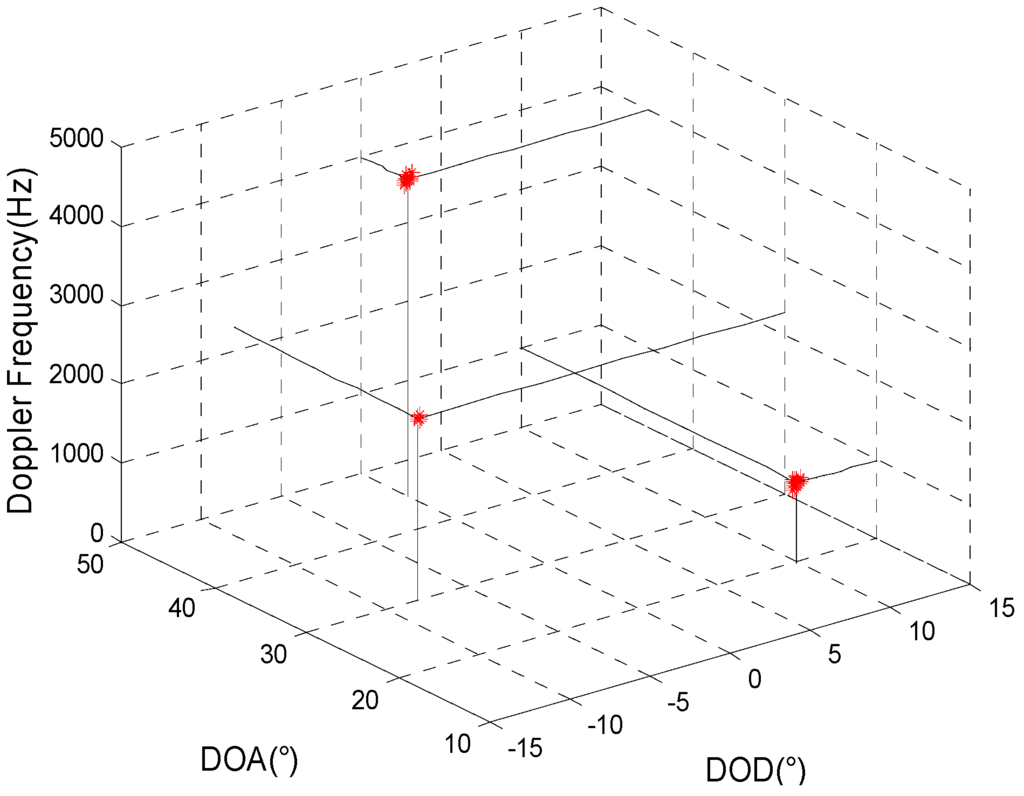 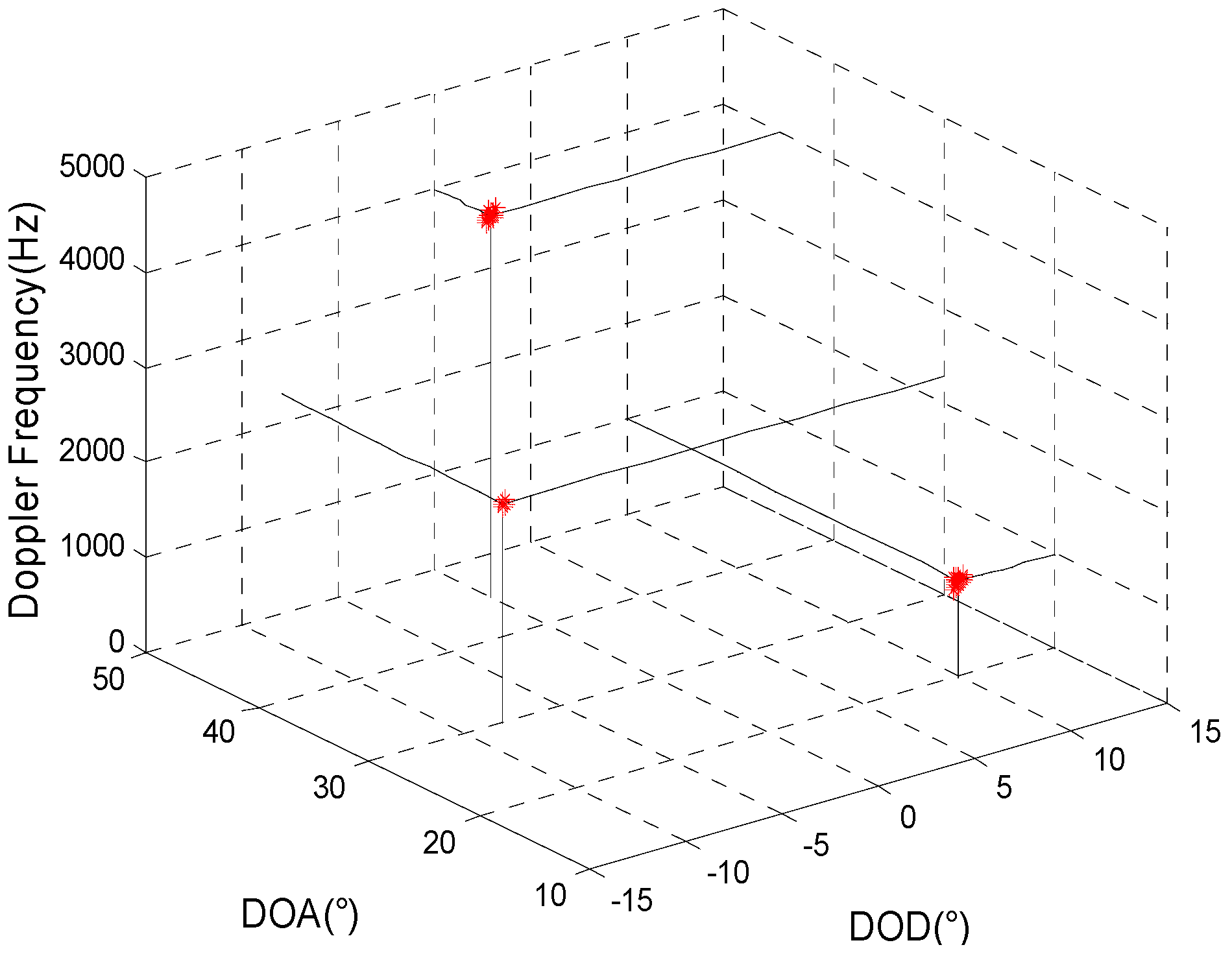 Figure 1 and Figure 2 show that a larger deviation of the estimation results for target parameters using the algorithm in reference [8] may occur as a result of the influence of spatial colored noise. For our proposed algorithm, the cross-correlation of the matched filters’ outputs for different moments is used so that the influence of spatial colored noise can be eliminated. Thus, the target parameters can be accurately estimated.

4.2. Simulation 2: When the Transmitting and Receiving Arrays are All Non-Uniform Linear Arrays, the Joint Estimation Results for the Target Parameters Using the Method Proposed here and the Algorithm Proposed in Reference [8] 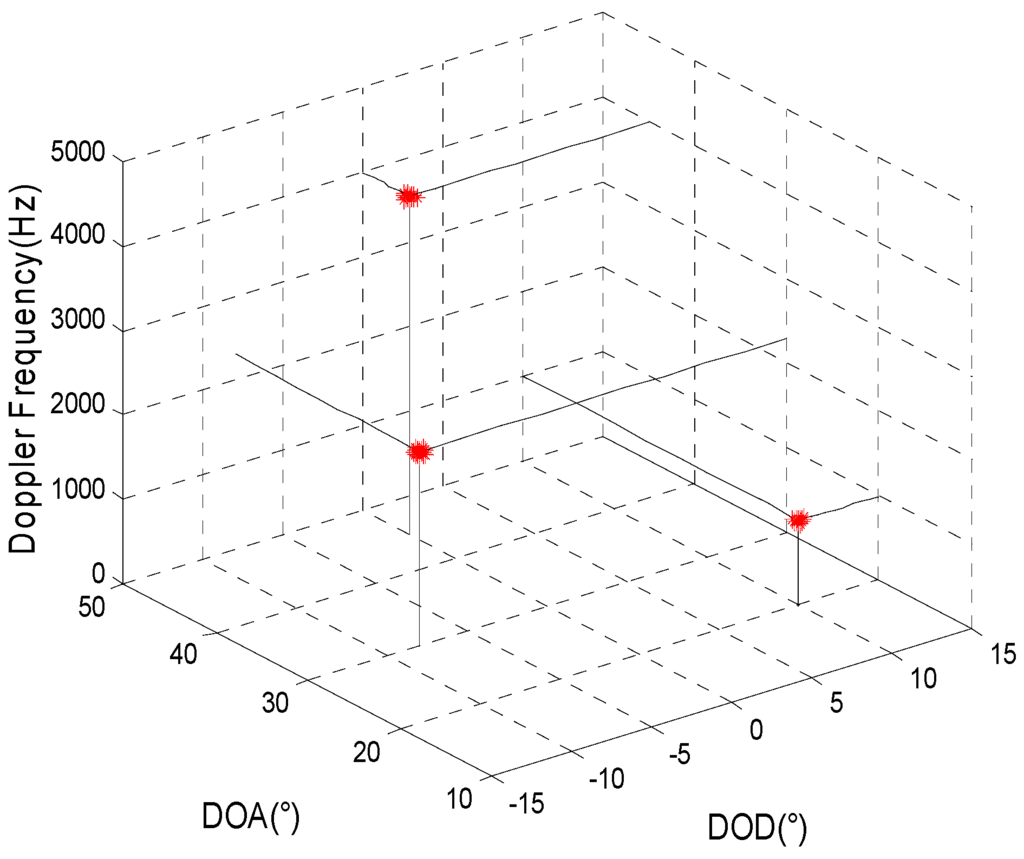 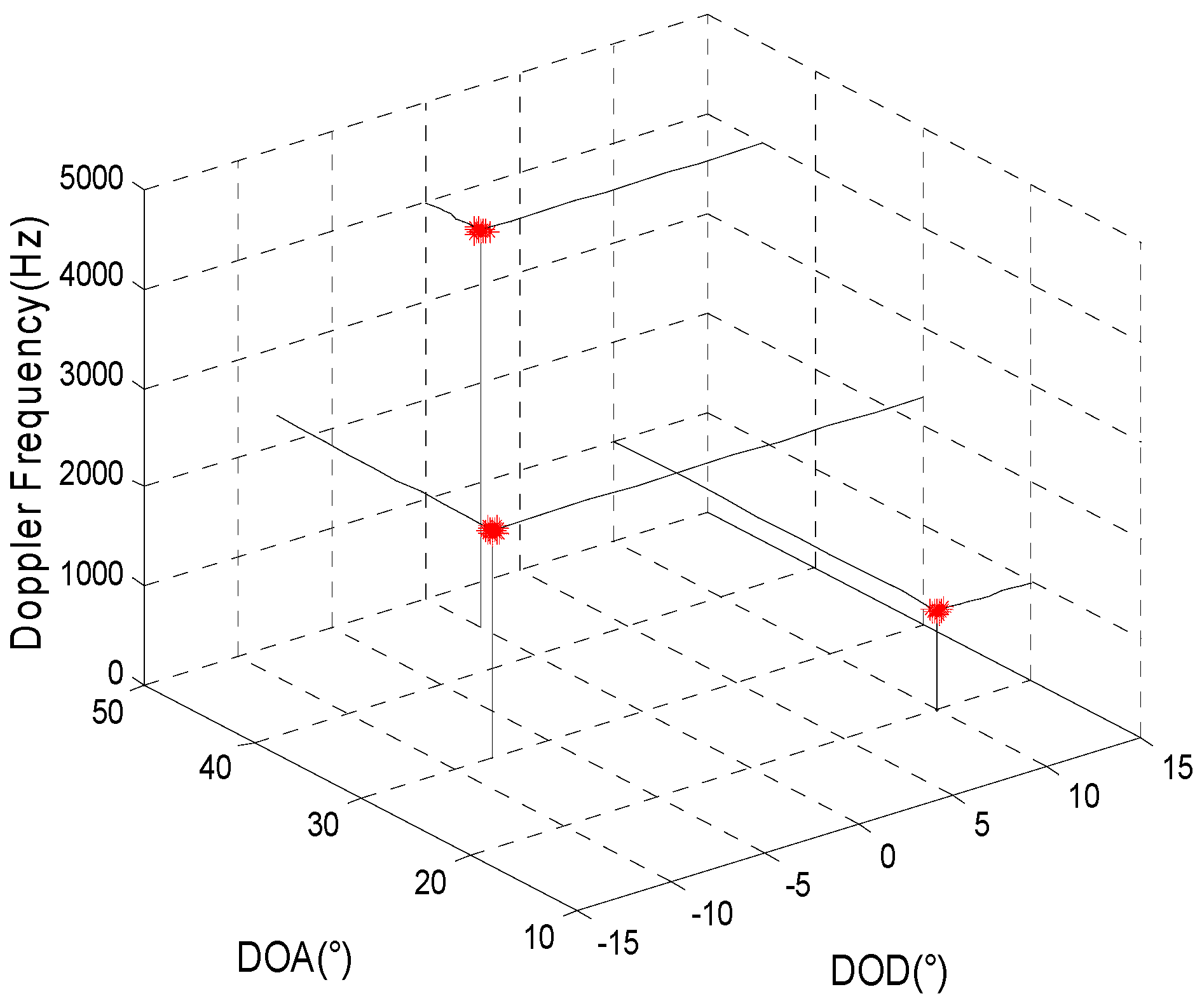 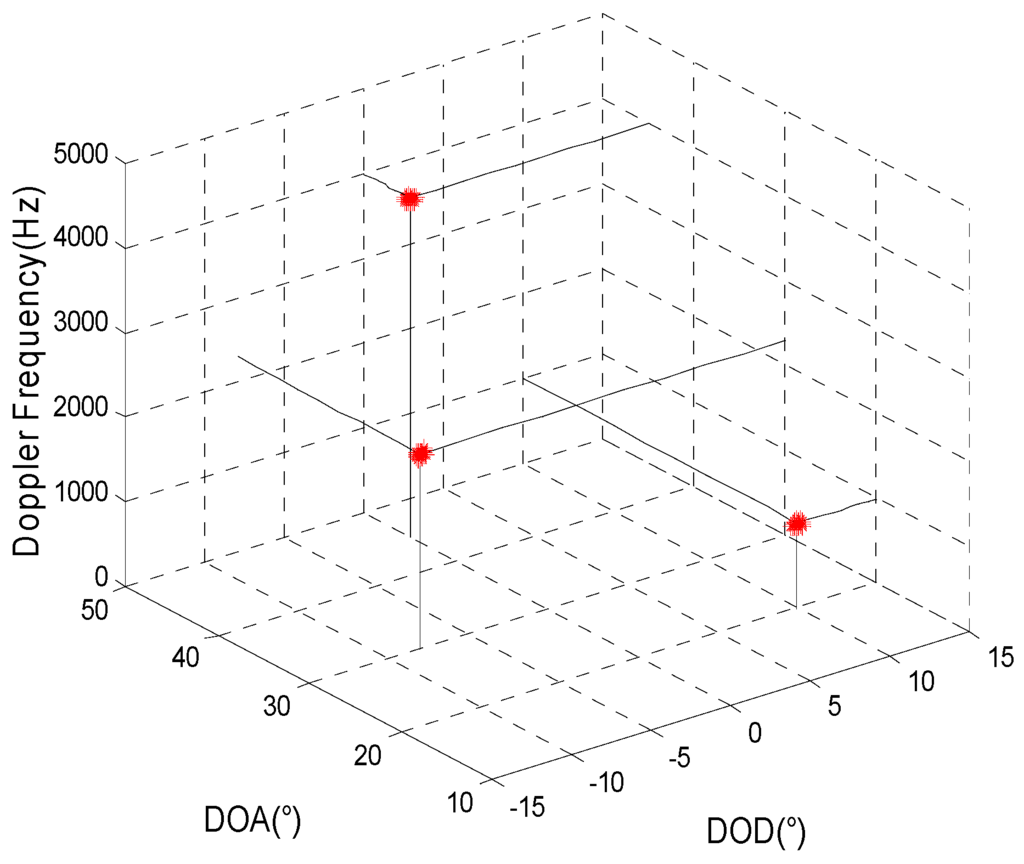 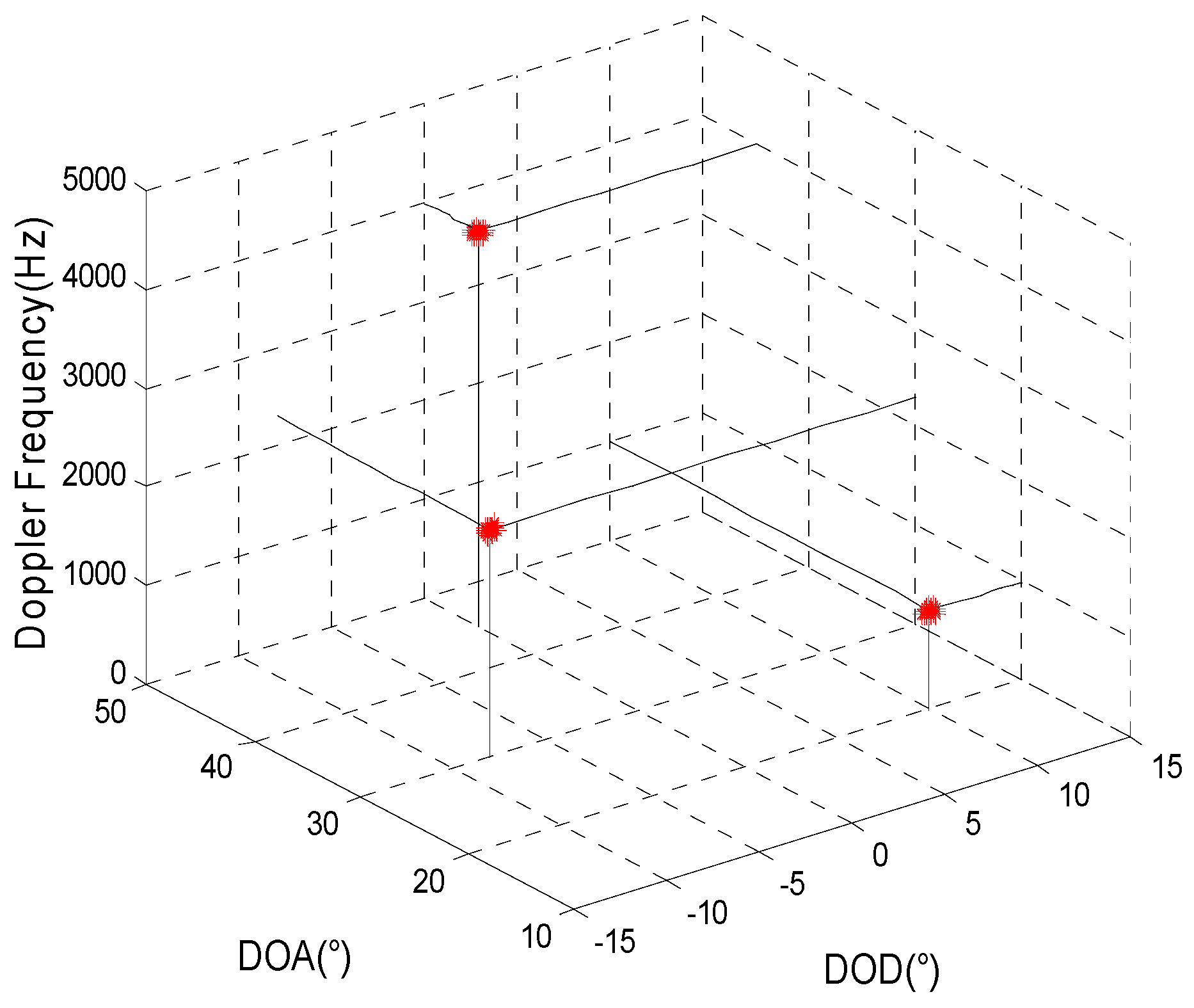 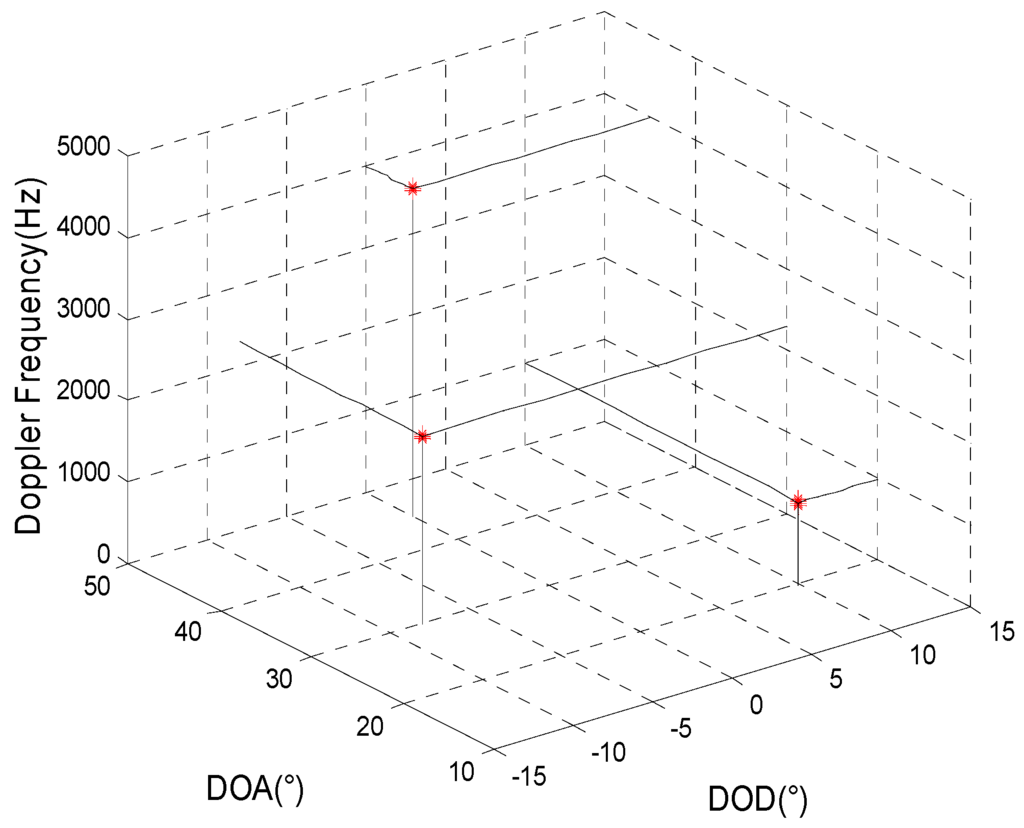 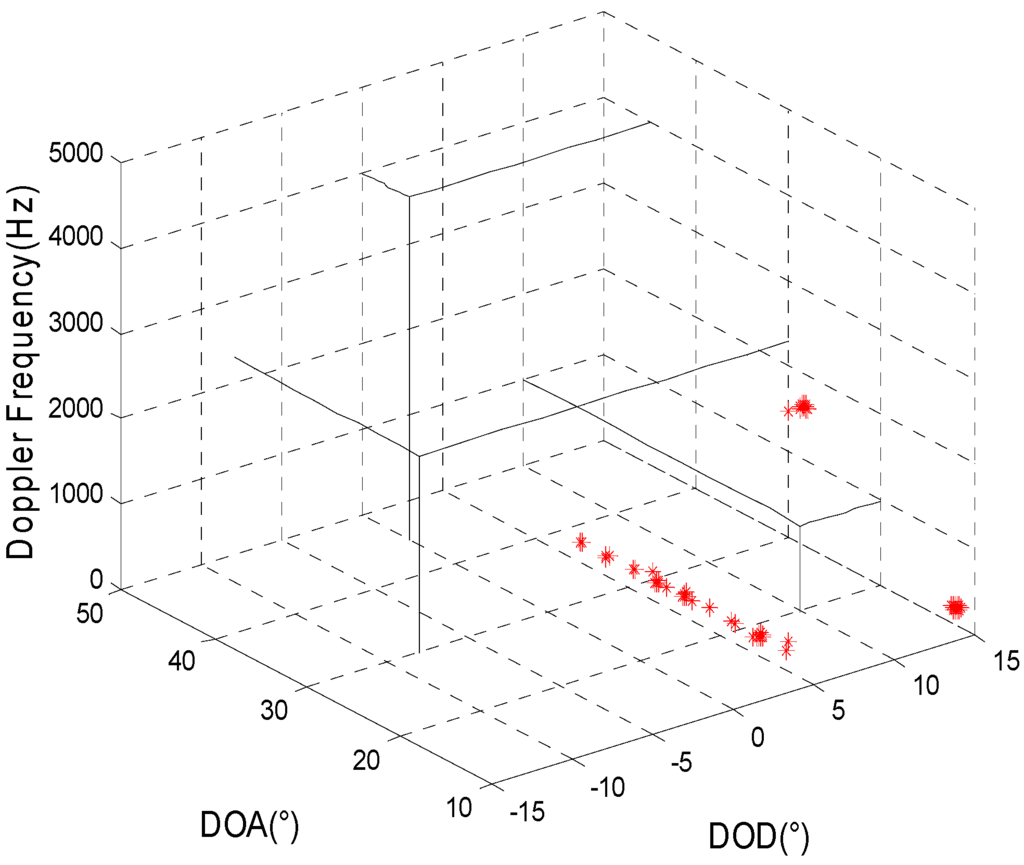 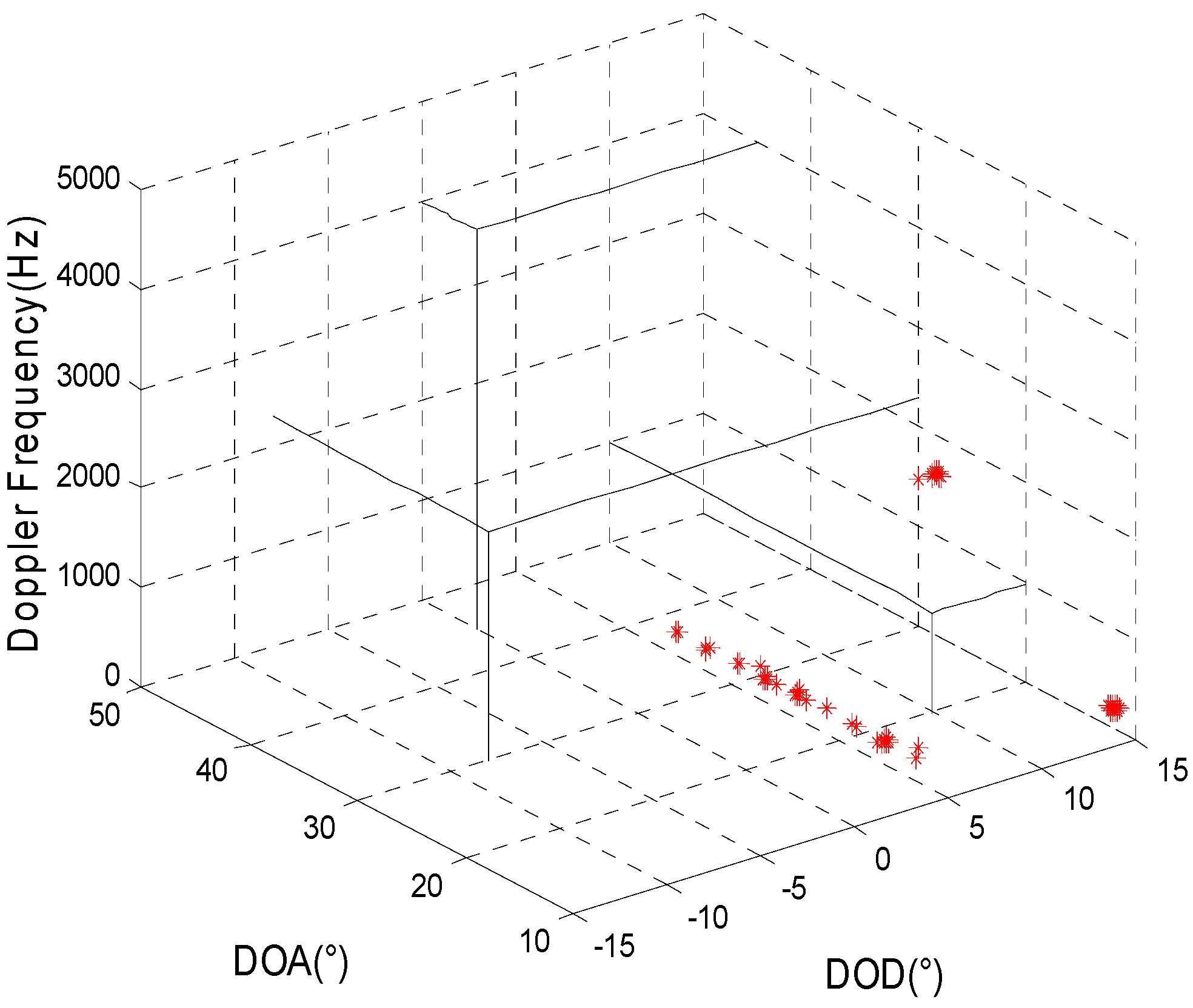 4.3. Simulation 3: The Comparison Curve of the Statistical Performance of the Algorithm

The statistical performance of the algorithms is compared with the SNR changes. The simulation parameters are given as in Simulation 2, and the simulation results were obtained using 200 Monte-Carlo experiments. Figure 7 and Figure 8 show, respectively, the comparison curve changed with the SNR of the RMSE estimated for the transmitting-receiving azimuth and the RMSE estimated for the Doppler frequency under different array set conditions. 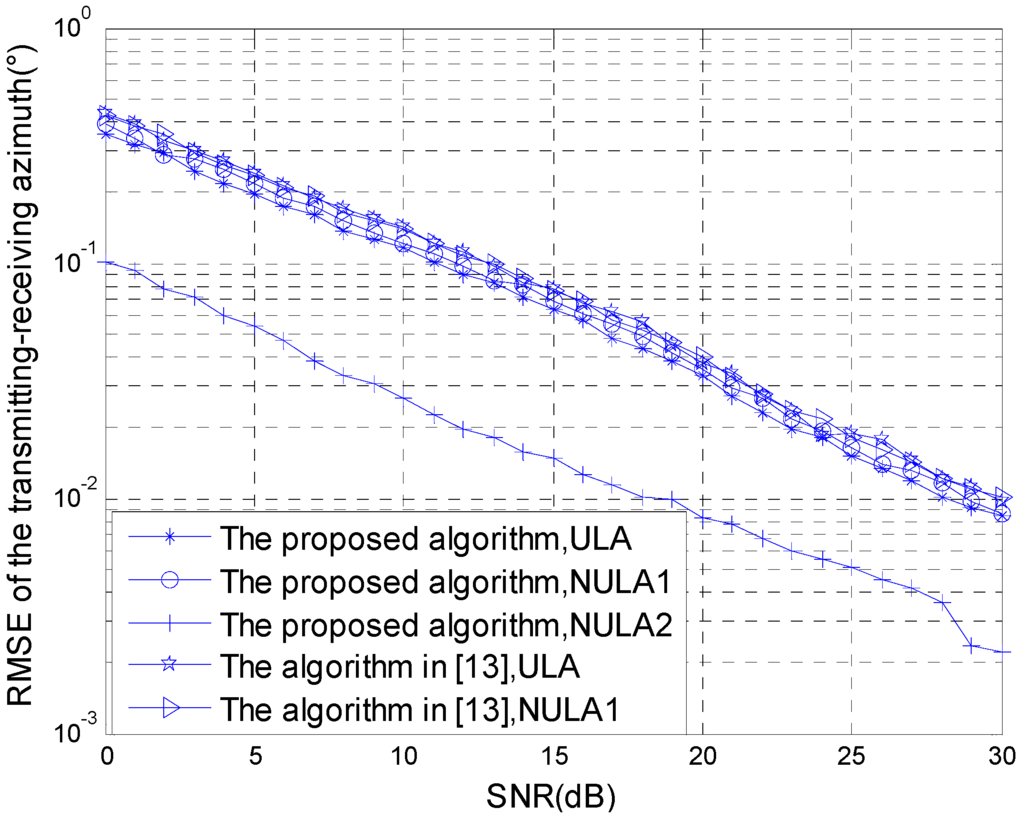 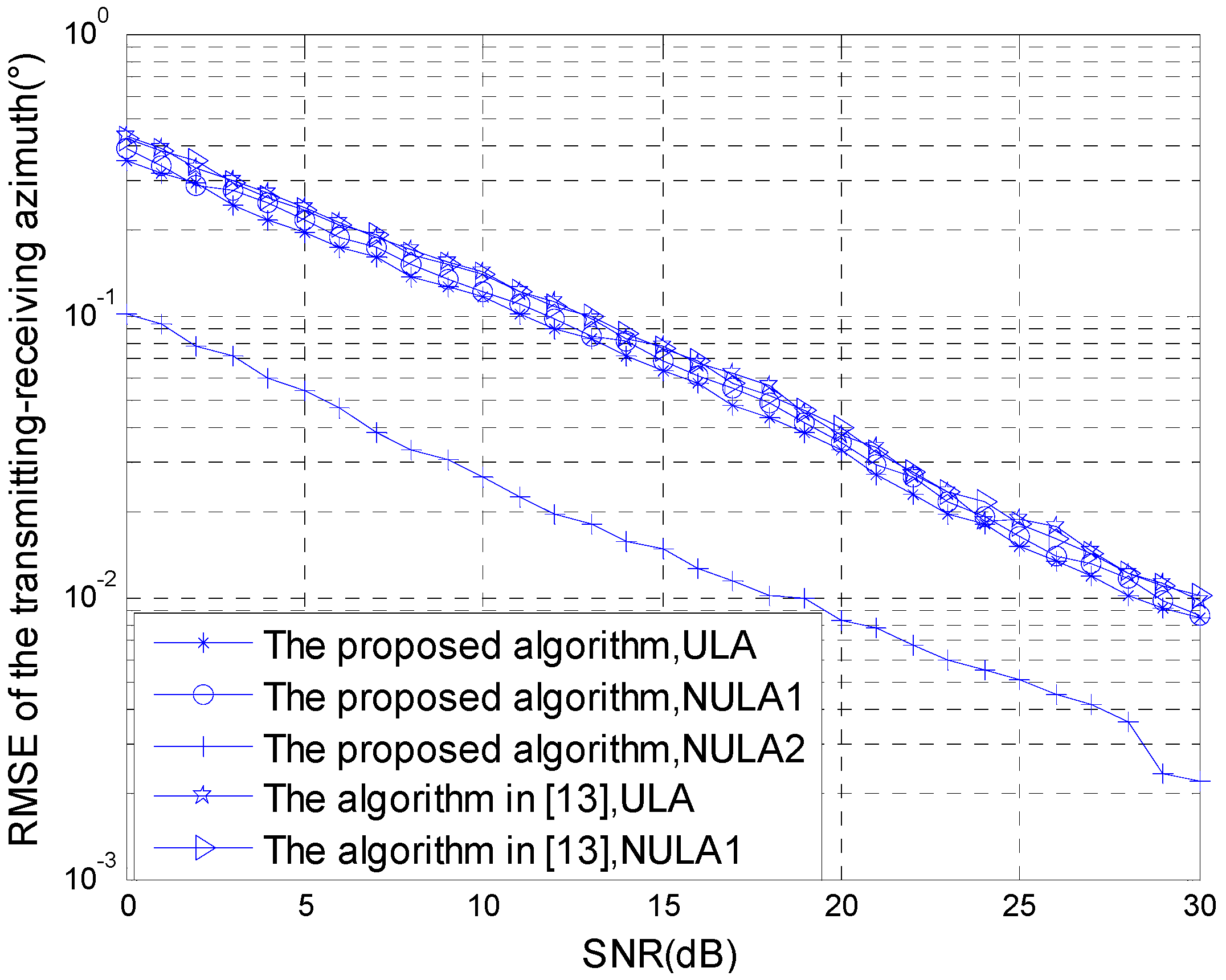 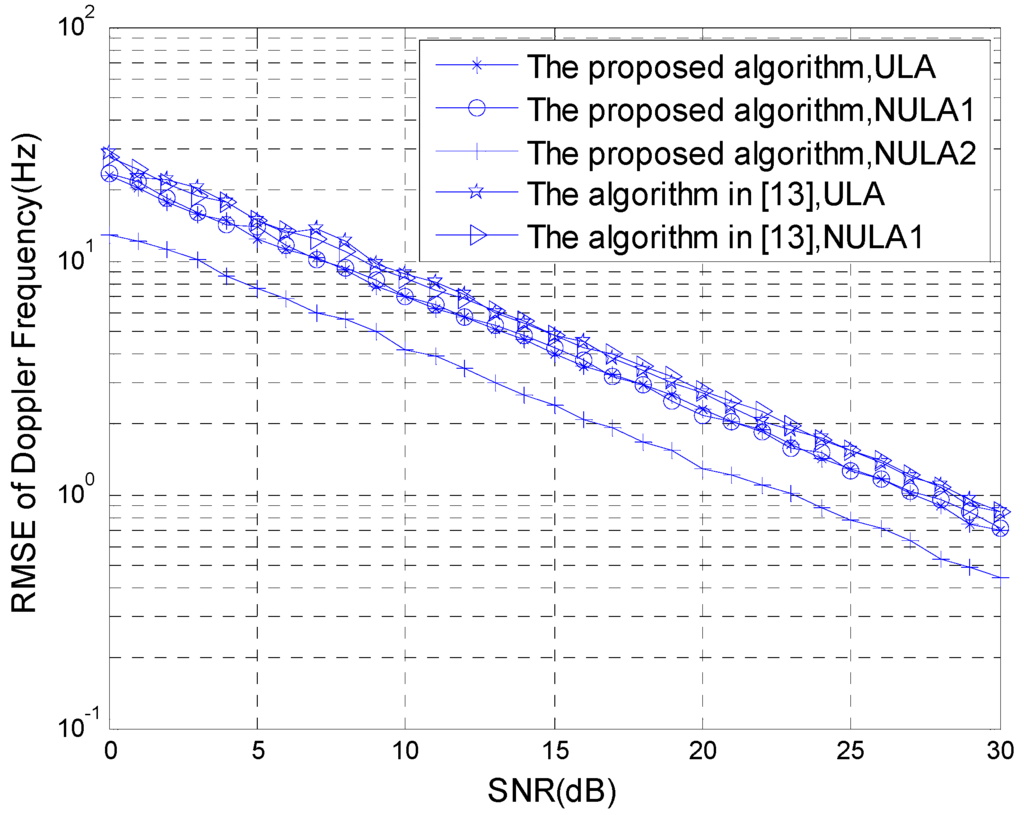 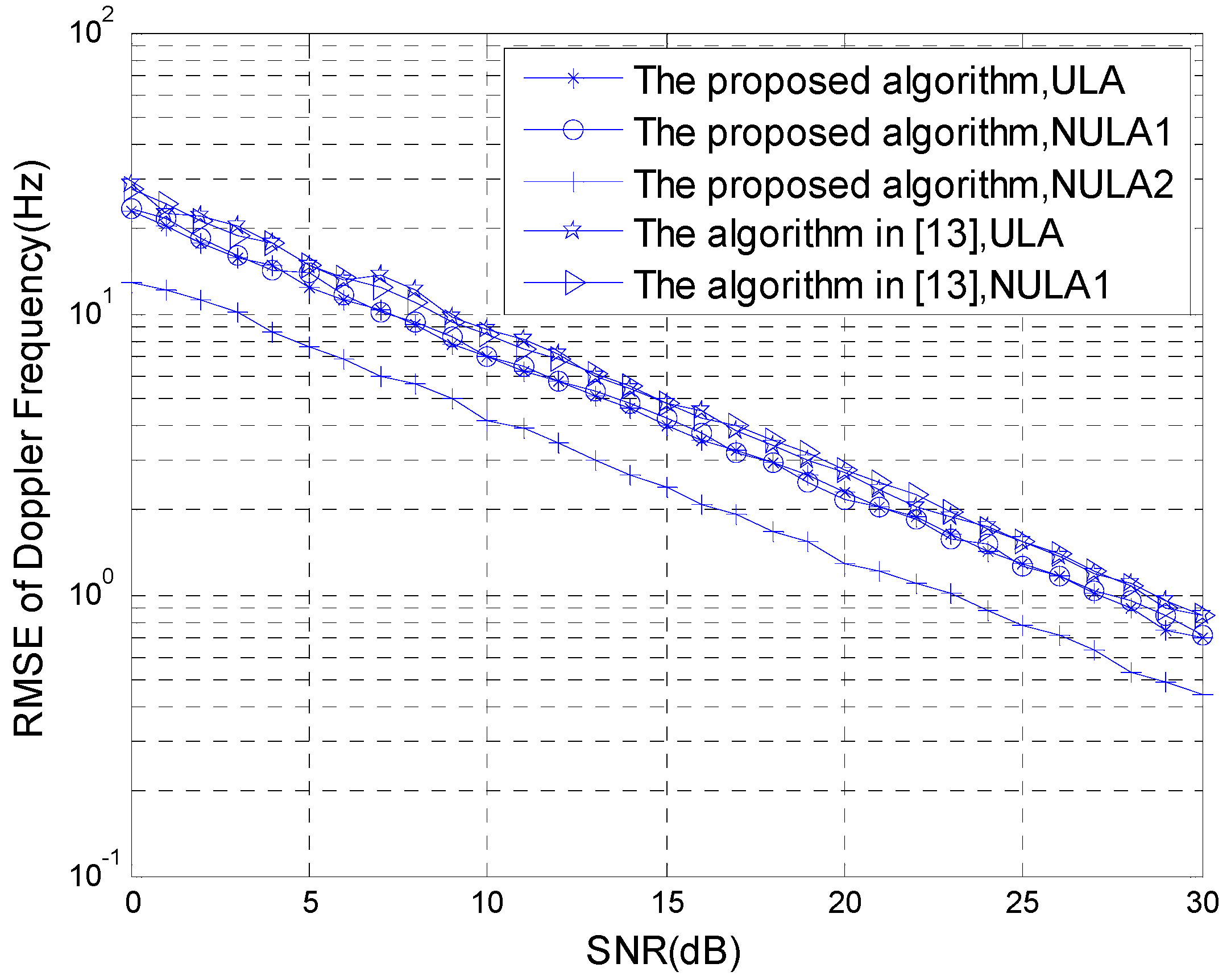 A spatio-temporal 2-D processing method for target parameter estimation for bistatic MIMO radar is proposed in this paper. In this method, the target DOD and DOA are first decoupled based on the diagonal loading method and are estimated. Then, the Doppler frequency is estimated based on the target 2-D azimuth estimation, thereby avoiding the multi-dimensional search of the joint parameters. Compared with the other existing estimation algorithms concerning the transmitting-receiving azimuth and Doppler frequency, the method proposed in this paper provides the following benefits:

This work was supported by the Natural Science Foundation of China under Grant (61501501).

The work was conducted under the cooperation of all authors. The main idea was proposed by Shouguo Yang and Kunhui Zhang. Yong Li analyzed the data model and provided many valuable suggestions. Shouguo Yang designed the processing method and wrote the manuscript. Weiping Tang completed the computer simulation. All authors participated in revising the manuscript.