In the last years fluorescence spectroscopy has come to be viewed as an essential approach in key research fields of applied plant sciences. However, the quantity and particularly the quality of information produced by different equipment might vary considerably. In this study we investigate the potential of three optical devices for the proximal sensing of plant-pathogen interactions in four genotypes of spring barley. For this purpose, the fluorescence lifetime, the image-resolved multispectral fluorescence and selected indices of a portable multiparametric fluorescence device were recorded at 3, 6, and 9 days after inoculation (dai) from healthy leaves as well as from leaves inoculated with powdery mildew (Blumeria graminis) or leaf rust (Puccinia hordei). Genotype-specific responses to pathogen infections were revealed already at 3 dai by higher fluorescence mean lifetimes in the spectral range from 410 to 560 nm in the less susceptible varieties. Noticeable pathogen-induced modifications were also revealed by the ‘Blue-to-Far-Red Fluorescence Ratio’ and the ‘Simple Fluorescence Ratio’. Particularly in the susceptible varieties the differences became more evident in the time-course of the experiment i.e., following the pathogen development. The relevance of the blue and green fluorescence to exploit the plant-pathogen interaction was demonstrated by the multispectral fluorescence imaging system. As shown, mildewed leaves were characterized by exceptionally high blue fluorescence, contrasting the values observed in rust inoculated leaves. Further, we confirm that the intensity of green fluorescence depends on the pathogen infection and the stage of disease development; this information might allow a differentiation of both diseases. Moreover, our results demonstrate that the detection area might influence the quality of the information, although it had a minor impact only in the current study. Finally, we highlight the relevance of different excitation-emission channels to better understand and evaluate plant-physiological alterations due to pathogen infections. View Full-Text
Keywords: chlorophyll fluorescence; blue-green fluorescence; Blumeria graminis; Puccinia hordei; fluorescence imaging; fluorescence lifetime chlorophyll fluorescence; blue-green fluorescence; Blumeria graminis; Puccinia hordei; fluorescence imaging; fluorescence lifetime
►▼ Show Figures 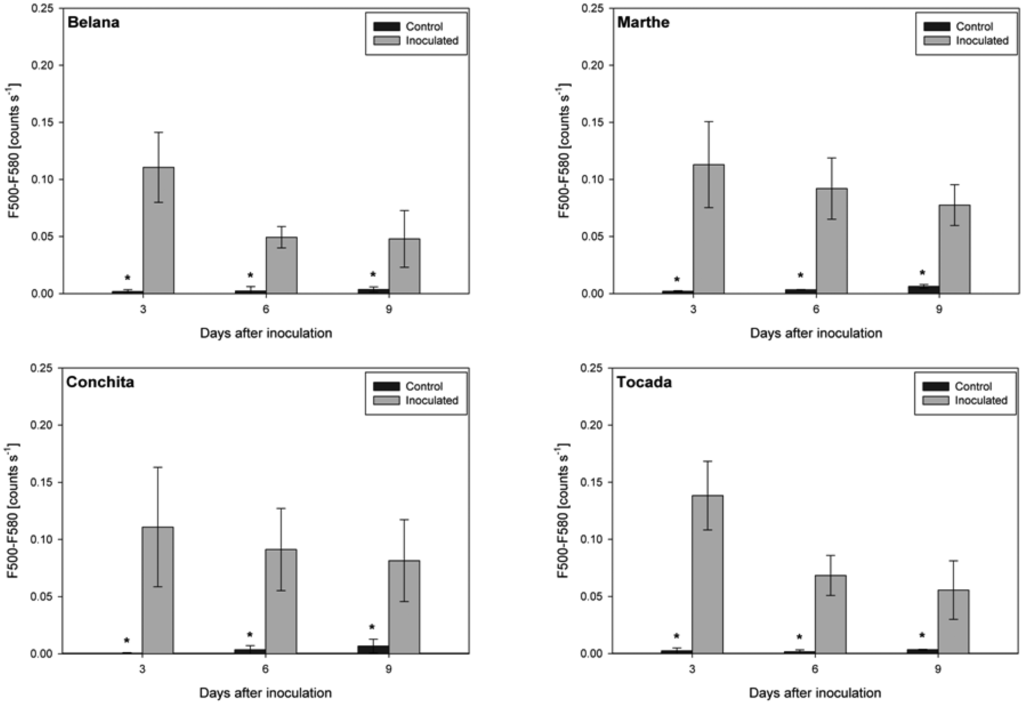