Wild species are extremely rich resources of useful genes not available in the cultivated gene pool. For species providing staple food to mankind, such as the cultivated Triticum species, including hexaploid bread wheat (Triticum aestivum, 6x) and tetraploid durum wheat (T. durum, 4x), widening the genetic base is a priority and primary target to cope with the many challenges that the crop has to face. These include recent climate changes, as well as actual and projected demographic growth, contrasting with reduction of arable land and water reserves. All of these environmental and societal modifications pose major constraints to the required production increase in the wheat crop. A sustainable approach to address this task implies resorting to non-conventional breeding strategies, such as “chromosome engineering”. This is based on cytogenetic methodologies, which ultimately allow for the incorporation into wheat chromosomes of targeted, and ideally small, chromosomal segments from the genome of wild relatives, containing the gene(s) of interest. Chromosome engineering has been successfully applied to introduce into wheat genes/QTL for resistance to biotic and abiotic stresses, quality attributes, and even yield-related traits. In recent years, a substantial upsurge in effective alien gene exploitation for wheat improvement has come from modern technologies, including use of molecular markers, molecular cytogenetic techniques, and sequencing, which have greatly expanded our knowledge and ability to finely manipulate wheat and alien genomes. Examples will be provided of various types of stable introgressions, including pyramiding of different alien genes/QTL, into the background of bread and durum wheat genotypes, representing valuable materials for both species to respond to the needed novelty in current and future breeding programs. Challenging contexts, such as that inherent to the 4x nature of durum wheat when compared to 6x bread wheat, or created by presence of alien genes affecting segregation of wheat-alien recombinant chromosomes, will also be illustrated. View Full-Text
Keywords: Triticum; crop wild relatives; alien gene transfer; alien gene pyramiding; chromosome engineering; segregation distortion; new plant breeding techniques Triticum; crop wild relatives; alien gene transfer; alien gene pyramiding; chromosome engineering; segregation distortion; new plant breeding techniques
►▼ Show Figures 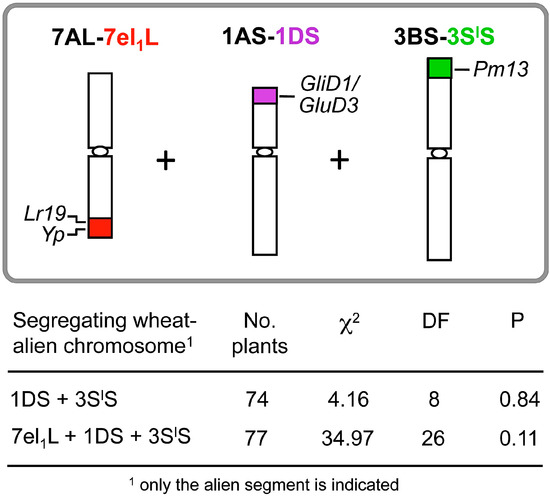