Habitat loss and fragmentation are considered the major treats to worldwide biodiversity. Carnivores in particular can be more sensitive to landscape modification due to their low occurrence density and large home ranges. Population structuring of Puma concolor has been already reported as a consequence of extensive human activities in the North American continent. Here, we investigated the occurrence of fine-scale population structuring in the South American cougar population, contrasting two conservation areas immersed in a highly human-fragmented landscape dominated by the presence of sugar cane monoculture, roads, and urbanization, including a series of dams in the Tietê River which enlarges its water body. Seven microsatellites were amplified using non-invasive DNA obtained from fecal samples. We conducted genetic clustering analyses using Bayesian and factorial components. We also performed genetic differentiation analyses by fixation indices (Fst and Dest). Two genetic clusters represented by individuals from each area were found, indicating the occurrence of gene flow reduction between the areas. The intense human-induced landscape modification—which includes the Tietê River water body enlargement, imposing physical barriers to the movement of the individuals—could explain the gene flow reduction. Increasing connectivity among the preserved areas can mitigate such effects, and the creation of corridors or further management actions such as individual translocation to ensure gene flow in the highly-modified landscape may be essential for maintaining the genetic and demographic health of the species and its long-term persistence. View Full-Text
Keywords: genetic structure; habitat fragmentation; carnivores; gene flow; conservation genetic structure; habitat fragmentation; carnivores; gene flow; conservation
►▼ Show Figures 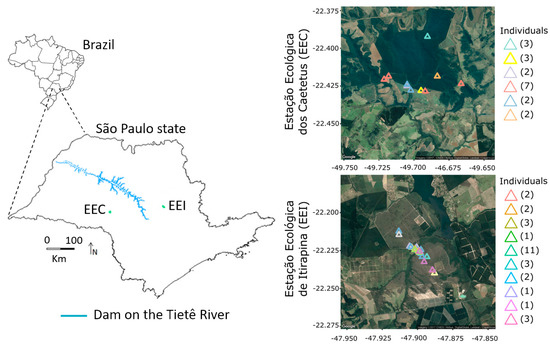