The Effects of Salinity and pH on Fertilization, Early Development, and Hatching in the Crown-of-Thorns Seastar

Outbreaks of crown-of-thorns starfish are often attributed to step-changes in larval survivorship following anomalous increases in nutrients and food availability. However, larval growth and development is also influenced by the nutritional condition of spawning females, such that maternal provisioning may offset limitations imposed by limited access to exogenous sources of nutrients during the formative stages of larval development. This study examined the individual, additive, and interactive effects of endogenous (maternal diet: Acropora, Porites, mixed, and starved) and exogenous (larval diet: high concentration at 104 cells·mL−1, low concentration at 103 algal cells·mL−1, and starved) nutrition on the survival, growth, morphology, and development of larvae of the crown-of-thorns starfish. Female starfish on Acropora and mixed diet produced bigger oocytes compared to Porites-fed and starved treatments. Using oocyte size as a proxy for maternal provisioning, endogenous reserves in the oocyte had a strong influence on initial larval survival and development. This suggests that maternal reserves can delay the onset of obligate exogenous food acquisition and allow larvae to endure prolonged periods of poor environmental nutritive conditions or starvation. The influence of exogenous nutrition became more prominent in later stages, whereby none of the starved larvae reached the mid-to-late brachiolaria stage 16 days after the onset of the ability to feed. There was no significant difference in the survival, development, and competency of larvae between high and low food treatments. Under low algal food conditions, larvae compensate by increasing the length of ciliated feeding bands in relation to the maximum length and width, which improve food capture and feeding efficiency. However, the effects of endogenous nutrition persisted in the later developmental stages, as larvae from starved females were unable to develop larger feeding structures in response to food-limiting conditions. Phenotypic plasticity influenced by endogenous provisions and in response to exogenous food availability may be an important strategy in boosting the reproductive success of crown-of-thorns starfish, leading to population outbreaks. View Full-Text
Keywords: Acanthaster outbreak; maternal provisioning; larval nutrition; larval development; phenotypic plasticity Acanthaster outbreak; maternal provisioning; larval nutrition; larval development; phenotypic plasticity
►▼ Show Figures 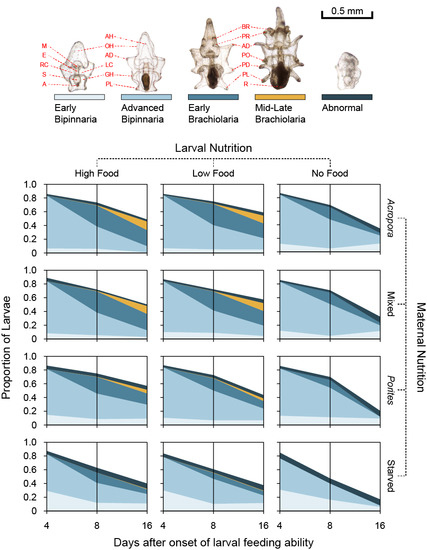