The corallivorous crown-of-thorns starfish (Acanthaster spp.) is a major cause of coral mortality on Indo-Pacific reefs. Despite considerable research into the biology of crown-of-thorns starfish, our understanding of the early post-settlement life stage has been hindered by the small size and cryptic nature of recently settled individuals. Most growth rates are derived from either laboratory studies or field studies conducted in Fiji and Japan. The Great Barrier Reef (GBR) is currently experiencing its fourth recorded outbreak and population models to inform the progression of outbreaks lack critical growth rates of early life history stages. High numbers of 0+ year juveniles (n = 3532) were measured during extensive surveys of 64 reefs on the northern GBR between May and December 2015. An exponential growth model was fitted to the size measurement data to estimate monthly ranges of growth rates for 0+ year juveniles. Estimated growth rates varied considerably and increased with age (e.g., 0.028–0.041 mm·day−1 for one-month-old juveniles versus 0.108–0.216 mm·day−1 for twelve-month-old juveniles). This pioneering study of 0+ year juveniles on the GBR will inform population models and form the basis for more rigorous ongoing research to understand the fate of newly settled Acanthaster spp. View Full-Text
Keywords: juvenile crown-of-thorns starfish; growth rates; growth curve analysis juvenile crown-of-thorns starfish; growth rates; growth curve analysis
►▼ Show Figures 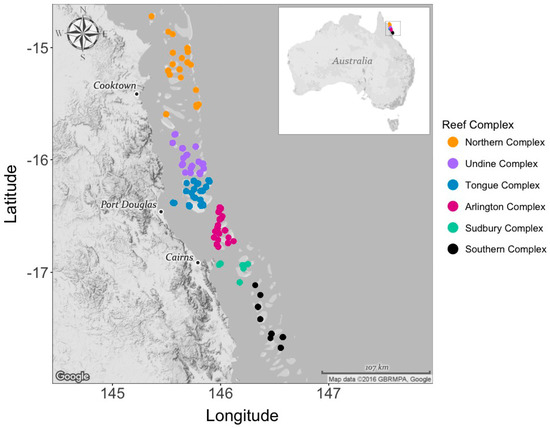