Distribution of the Genus Passiflora L. Diversity in Colombia and Its Potential as an Indicator for Biodiversity Management in the Coffee Growing Zone

Analysis was made of 3,923 records of 162 wild Passiflora specimens to assess the distribution of their diversity in Colombia, identify collection gaps, and explore their potential as indicator species. Despite variable collecting density among and within biogeographic regions, the Andean region clearly presents a higher species richness, particularly in the central coffee growing zone and the departments of Antioquia, Cundinamarca and Valle del Cauca. The elevational distribution of diversity shows a small peak below 500 m, and two higher ones between 1,000–2,000 and 2,500–3,000 m. This pattern corresponds to divergent adaptive trends among infrageneric divisions. The analysis on 19 climatic variables showed that the two principal variance components, explaining 77 percent of the total, are respectively associated with temperature and precipitation, without influence of seasonality. Distribution parameters allow recognizing more than 36 narrow endemics. Prediction of species distribution showed nine areas with very high richness (predicted sympatry of 41 to 54 species) in the Andean region, three of which correspond to collection gaps. Endemics were not particularly frequent there, so a prioritization of protected areas based on species richness would not favor their conservation. The sites with high Passiflora diversity are poorly represented in the current system of protected areas. Instead, their striking correspondence with ecotopes of the coffee growing zone imposes a conservation strategy integrating agricultural and environmental management at the landscape level. Reciprocally, several traits of Passiflora species make them particularly suited as indicators for any effort of conservation or restoration in this region of importance for the country. View Full-Text
Keywords: Andes; coffee growing zone; Colombia; biodiversity indicators; endemism; geographic information systems Andes; coffee growing zone; Colombia; biodiversity indicators; endemism; geographic information systems
►▼ Show Figures 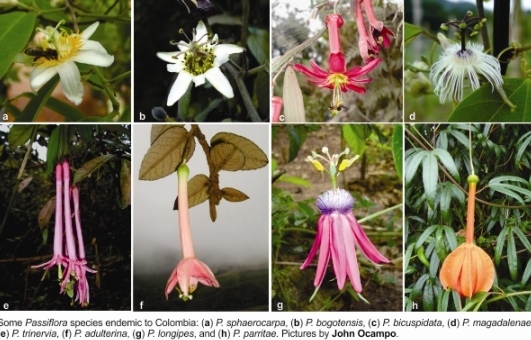