Coral reefs are threatened by climate change, overfishing, and pollution. Artificial reefs may provide havens for corals, both to escape warming surface waters and to assist in the geographic migration of corals to more habitable natural reef conditions of the future. The largest artificial reefs have been generated by nearly 2000 shipwrecks around the world, but the coral diversity on these wrecks is virtually unknown. Ship size and hull material, location relative to natural reef, time since sinking, ocean currents, and water depth may affect coral diversity. As a test of the biodiversity capacity of very large sunken structures relative to surrounding natural reef, we carried out technical diver-based surveys to quantify genus-level coral diversity on 29 warships sunk in Bikini Atoll and Chuuk Lagoon. We also assessed whether ship length, as an index of substrate availability, and water depth, as an indicator of light and temperature, can serve as predictors of coral diversity. We surveyed a total of 9105 scleractinian corals. The total number of genera identified at Bikini was 34, and at Chuuk it was 51, representing 67% and 72% of genera found on natural reefs at Bikini and Chuuk, respectively. Ship length, but not water depth, was positively correlated with relative abundance and richness at the genus level. Our results suggest that very large wrecks can serve as havens for reef-building corals with a broad genetic diversity, expressed at the genus level, commensurate with corals found on neighboring natural reefs. The role of large artificial reefs could include protecting coral biodiversity from warming surface waters. View Full-Text
Keywords: artificial reef; Bikini Atoll; Chuuk Atoll; coral diversity; coral reef; shipwrecks artificial reef; Bikini Atoll; Chuuk Atoll; coral diversity; coral reef; shipwrecks
►▼ Show Figures 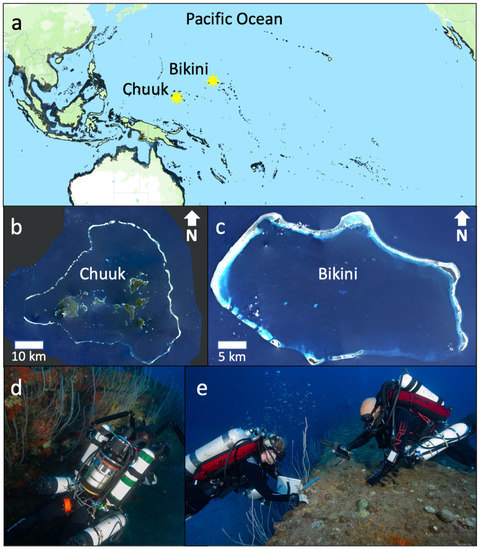