An Overview of “Insect Biodiversity”
Next Article in Special Issue

Helminths of Erinaceus roumanicus (Eulipotyphla, Erinaceidae) in Mordovia (Russia) with an Overview of Helminth Fauna of Erinaceus spp. Inhabiting the Palaearctic Region
Previous Article in Journal

Three New Species of Absidia (Mucoromycota) from China Based on Phylogeny, Morphology and Physiology
Previous Article in Special Issue

Is It Function or Fashion? An Integrative Analysis of Morphology, Performance, and Metabolism in a Colour Polymorphic Lizard

Mesocarnivore Distribution along Gradients of Anthropogenic Disturbance in Mediterranean Landscapes

Wildfires are important sources of landscape change in Mediterranean environments, creating large patches of low-growth natural habitats (i.e., scrublands) inside protected areas, whereas woodland patches remain mostly near well protected human settlements. Landscape patterns resulting from these gradients influence habitat suitability for mesocarnivores regarding food and shelter. In winter and summer 2019, we sampled 16 independent line-transects with four camera traps each (64 cameras overall), covering the main habitats of the study area (woodlands, scrublands, and crops). Cameras were baited to compensate for the low detectability of target species, and mesocarnivore contacts were analysed by means of GLMMs and occupancy models. Our results showed a positive and stronger association of wild species with woodland habitats, despite the low proportion of habitat available, higher presence of competitors (other mesocarnivores), and potential predators (human pets, i.e., dogs), and low natural prey availability than in scrubland (i.e., small mammals). However, mesocarnivores will find protection against predators and resting sites in forests as well as other food opportunities in crops and urban areas, despite the possible interference with humans and their pets. Potential cascading effects linked to ecological roles of Mediterranean mesocarnivores on the succession of Mediterranean landscapes would imply longer-term effects of human disturbance on landscape trends. View Full-Text
Keywords: carnivores; habitat suitability; landscape gradients; scrublands; woodlands; wildfires carnivores; habitat suitability; landscape gradients; scrublands; woodlands; wildfires
►▼ Show Figures 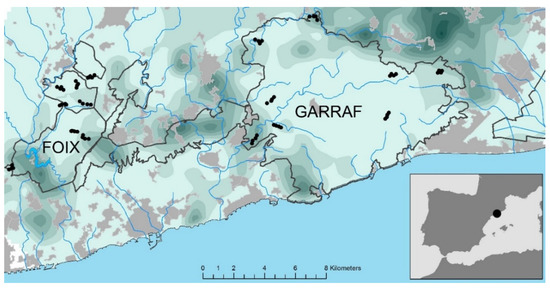