Genetic, but Not Behavioral, Evidence Supports the Distinctiveness of the Mealy Amazon Parrot in the Brazilian Atlantic Forest

Andre B. S. Saidenberg
2 and

The presence of unidentified cryptic species within a species complex can obscure demographic trends of vulnerable species, impacting potential species conservation and management decisions. Previous work identified a taxonomic split between Central and South American populations of the mealy amazon (Amazona farinosa) that subsequently resulted in the elevation of these two populations to full species status (Amazona guatemalae and A. farinosa, respectively). In that study, however, a third, geographically disjunct population from the Brazilian Atlantic Forest was insufficiently sampled, limiting the ability of researchers to fully evaluate its genetic distinctiveness. Given that significant levels of biodiversity and endemism are found in this region, we aimed to use genetic and behavioral data to determine if the Atlantic Forest population of A. f. farinosa represents a third cryptic species within the complex. We sequenced 6 genes (4 mitochondrial and 2 nuclear introns) from the Atlantic Forest population of A. f. farinosa to measure the genetic relationships between this population and all other recognized species and subspecies of the mealy amazon. In addition, we use spectrographic cross-correlation and an analysis of 29 acoustic parameters to determine whether the taxa diverge in their learned contact call structure and if the degree of vocal differentiation correlates to genetic structure. We found that the Atlantic Forest population of A. f. farinosa was genetically distinct from that of the greater Amazon basin, but the degree of differentiation was less than that separating the Central and South American taxa. Acoustic analysis revealed substantial variation in contact call structure within each clade. This variation created substantial overlap in acoustic space between the clades. In all, the degree of call divergence between clades did not correspond to the degree of genetic divergence between the same clades. The results suggest that in taxa with substantial geographic variation in learned calls, such as the mealy amazon, vocalizations may not be a useful tool in the identification of cryptic species that are lifelong vocal learners. While these results do not support the elevation of the Brazilian Atlantic Forest population of the mealy amazon to full species status, given current trends of habitat loss in the Atlantic Forest as well as the imperiled status of large parrot species globally, we argue that this population nonetheless warrants special conservation and management consideration as a pool of unique genetic diversity within the southern mealy amazon species. View Full-Text
Keywords: cryptic species; vocal variation; parrot; genetic differentiation; open-ended learning; Amazona farinosa cryptic species; vocal variation; parrot; genetic differentiation; open-ended learning; Amazona farinosa
►▼ Show Figures 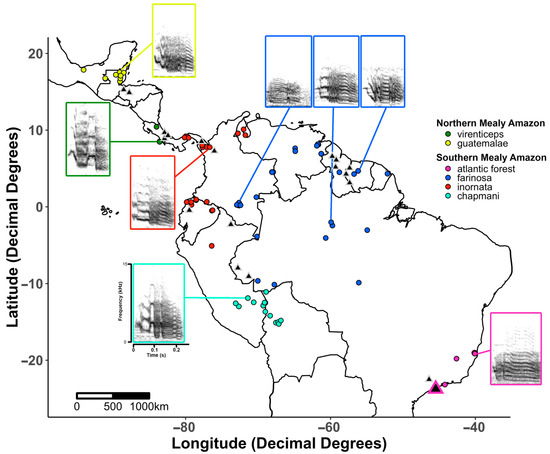