Polygordius is a clade of marine annelids mainly seen in coarse-grained habitats. They are notable for their smooth bodies, lacking in chaetae or obvious segments, and they resemble Nematoda or Nemertea. Though Polygordius taxa are found in all oceans of the world, identifying species based only on morphological characters can be challenging due to their relatively uniform external appearances. Diversity within the clade has likely been markedly underestimated. Where morphological characters are inconspicuous or even unreliable, molecular methods can provide clarity in delimiting species. In this study, morphological methods (examination under light and scanning electron microscopy) were integrated with molecular analyses (sequencing of Cytochrome c oxidase subunit I, 16S rRNA and Histone H3 gene fragments) to establish the systematic placement of Polygordius specimens collected from Australia, Belize, French Polynesia, Indonesia, Japan, and the U.S. west coast. These analyses revealed three new species of Polygordius from the Pacific Ocean (P. erikae n. sp., P. kurthcarolae n. sp., and P. kurthsusanae n. sp.) as well as one new species from the Caribbean Sea (P. jenniferae n. sp.). These new species are formally described, and a previously known Japanese species, P. pacificus Uchida, 1936, is redescribed. This study establishes the first molecular data set for Polygordius species from the Pacific region, as well as the first formal description of a Caribbean species of Polygordius. Phylogenetic relationships within Polygordius are summarized and discussed. View Full-Text
Keywords: integrative taxonomy; meiofauna; interstitial; diversity; distribution; new records integrative taxonomy; meiofauna; interstitial; diversity; distribution; new records
►▼ Show Figures 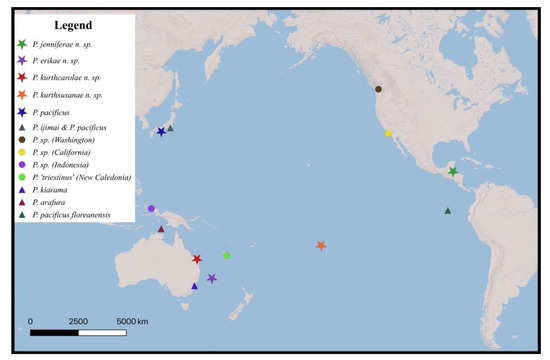