A better understanding of deep-sea biology requires knowledge of the structure and function of their communities, the spatial, temporal, and environmental patterns, and the changes and dynamics that govern them. Some of the most studied patterns in deep-sea biology are those related to bathymetrical gradients. For meiofauna and nematodes, such studies have highlighted the importance of recognizing regional differences in using ecological mechanisms to explain those patterns. Despite holding significant fisheries and oil and gas resources, the eastern Brazilian Continental Margin is poorly understood with respect to its seafloor biology and ecology. To answer ecological questions of deep-sea infaunal structural and functional diversity in relation to bathymetrical patterns, we used nematode data from five bathymetric transects (400, 1000, 1900, 2500, and 3000 m water depth) sampled in 2011 and 2013 on the Espírito Santo slope off the coast of southeast (SE) Brazil. Deep nematode community analysis based on 6763 nematode identifications showed very high levels of diversity (201 genera; 43 families) compared to other ocean basins and deep-sea regions. Our analyses showed that there is a distinct bathymetric break in standing stocks and community structure between 1000 and 1900 m. Nematode standing stocks were much higher at 400 and 1000 m compared to those for similar depths worldwide, likely linked to the intense and frequent upwelling and specific hydrographic and topographic identity of the region. The bathymetric break was not present for structural and functional nematode diversity. Instead, bathymetric regressions showed that they increased gradually toward 3000 m water depth. The deep Espírito Santo basin is characterized by rich and equitable nematode communities that are both mature and trophically diverse. General deep-sea ecological theories apply to our findings, but there are also substantial regional effects related to the local margin topography, upwelling, and oceanographic and hydrodynamic processes that make the Espírito Santo Basin a unique and diverse deep-sea ecosystem. View Full-Text
Keywords: deep sea; Nematoda; continental slope; bathymetric gradient; diversity; ecosystem function; Brazil; Atlantic Ocean deep sea; Nematoda; continental slope; bathymetric gradient; diversity; ecosystem function; Brazil; Atlantic Ocean
►▼ Show Figures 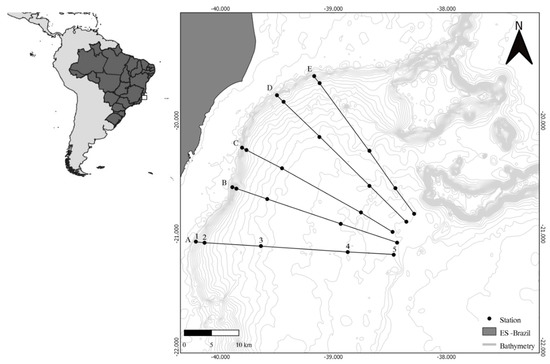