Diversity of Feeding in Anthozoa (Cnidaria): A Systematic Review
Previous Article in Journal

Megalobrama terminalis, which inhabits the Sino-Russian Heilong-Amur River Basin, has decreased critically since the 1960s. It has been listed in the Red Book of Endangered Fish Species by the Russian Federation in 2004. To guide the utilization and conservation programs of M. terminalis in the Heilong River (MTH), 3.1 kb of mitochondrial DNA (mtDNA) concatenated sequences and sequence-related amplified polymorphism (SRAP) markers (15 primer combinations) were applied to explore the genetic divergence and population differentiation of MTH within the genus Megalobrama. Clear genetic divergence between MTH and six other populations of the genus Megalobrama was found by haplotype network (mtDNA) and principal component (SRAP) analyses. Moreover, the STRUCTURE analysis based on SRAP data showed that MTH could be assigned to a particular cluster, whereas conspecific M. terminalis in the Qiantang River and Jinsha River Reservoir belonged to the same cluster. Analysis of molecular variance (AMOVA) and Fst statistics for the mtDNA and SRAP data revealed significant genetic variance and differentiation among all detected populations. Taken together, the results suggest that MTH has a strong genetic differentiation from other populations within the genus Megalobrama, which contributes to effective utilization in artificial cultivation and breeding of MTH. Furthermore, these results also provide a scientific basis for the management of MTH as a separate conservation unit. View Full-Text
Keywords: Megalobrama terminalis; genetic differentiation; population structure; mitochondrial DNA; SRAP Megalobrama terminalis; genetic differentiation; population structure; mitochondrial DNA; SRAP
►▼ Show Figures 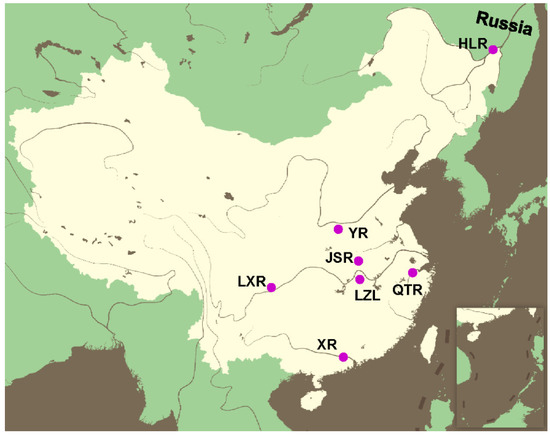