Temporal Evolution of Diatoms in a Temporary Pond Situated in the Massif du Sancy Mountains (Massif Central, France) and Description of a New Pinnularia Species

A floristic survey was performed on a temporary pond, “Laqui du Seignavoux”, situated in the Mont-Dore massif of the French Massif Central, between 2017 and 2019. Except in 2017, each year, we performed four sampling campaigns from April/May to December. Water samples and diatoms were collected. The temporary pond evolved from a poorly mineralized ecosystem due to snow, inducing oligotrophic and oligosaprobic water, well oxygenated in spring, to a more mineralized, less oxygenated, eutrophic–hypereutrophic, and polysaprobic environment in summer. This change in abiotic conditions was found to be linked to the presence of cattle, beginning in May, that trample and excrete in the pond, leading to higher ammonium and nitrate concentrations. During this period, the dominant species were Pinnularia sp., Nitzschia palea, and Nitzschia palea var. tenuirostris. In spring and winter, different species of Eunotia dominated the community such as Eunotia pseudogroenlandica. Finally, light microscopy (LM) and scanning electron microscopy (SEM) observations on a new species of the genus Pinnularia from the temporary pond are presented and the ecological preferences are discussed. View Full-Text
Keywords: diatom communities; epipelic and epiphytic diatoms; mountain habitat; temporary pond; new species diatom communities; epipelic and epiphytic diatoms; mountain habitat; temporary pond; new species
►▼ Show Figures 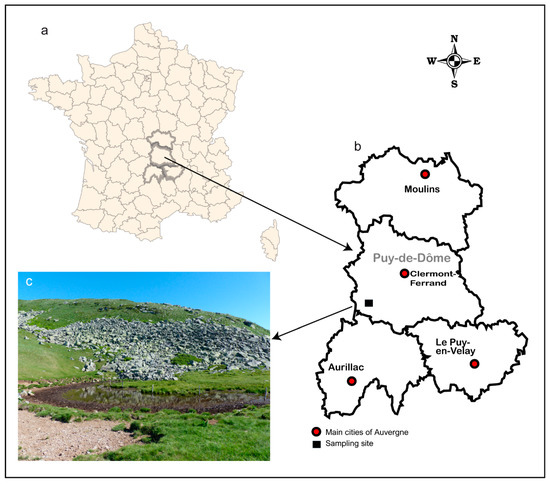