Diversity of a Large Collection of Natural Populations of Mango (Mangifera indica Linn.) Revealed by Agro-Morphological and Quality Traits
Next Article in Special Issue

The Atlantic waters along the coast of the Iberian Peninsula (across ~7° of latitude, 36–43° N, Figure 1) have overlapping biotopes where species of both boreal and Lusitanian origins coexist [1,2] and are included within the same ecoregion, the South European Atlantic Shelf [3]. This temperate marine ecoregion encompasses the Atlantic Iberian Peninsula, which at its southern limit edges with Sahara upwelling off the west coast of Africa and the Alboran Sea, within the Mediterranean [3]. This geographical location also presents a great diversity of oceanographic processes that provide multiple climatic conditions and greatly influence its fauna and flora biodiversity. However, little is known about the biodiversity in this region, which hampers understanding of conservation needs and suggests that developing baseline records should be a research priority. Features that affect macroalgal distribution in the nearshore rocky subtidal zone include wave action, rock slope, stratification of the water column (i.e., temperature, nutrients), sedimentation, biological interactions (grazing, competition), and, most importantly, light [4,5].
Community assemblages in temperate regions are under the threat of climate-driven changes, eventually having profound consequences for their structure and the ecosystem functions they provide [6,7]. In particular, global warming may cause community phase shifts in macroalgal-dominated temperate reefs due to the tropicalization of the community, that is, the intrusion of tropical herbivorous fishes into temperate systems [8,9]. Baseline assessment of the macroalgae and fish assemblages in temperate reefs are therefore necessary to detect potential community shifts due to global warming in the future.
This study aims to characterize macroalgae and fish assemblages of temperate reefs (25–30 m) dominated by macroalgae at two southern Europe locations, Parcel and Tarifa (Figure 1). Both locations belong to the South European Atlantic Shelf ecoregion. Tarifa, situated in the Strait of Gibraltar, is considered a geographical pivotal point located at the junction of two other adjacent ecoregions [3]: the Sahara upwelling (off the west coast of Africa) and the Alboran Sea, within the Mediterranean Sea. Parcel is embedded in the South European Atlantic Shelf away from other adjacent ecoregions. Nevertheless, both locations might experience tropicalization phenomena and therefore biodiversity records are imperative to further understand shifts that potentially can occur.

Two temperate reefs dominated by kelp forests were included in the study, Parcel and Tarifa (Figure 1). Parcel reef is located in Northern Portugal (41.3° N), ≈2.5 nautical miles off Viana do Castelo (Figure 1b), and it is found between 26 and 30 m. Tarifa reef is located in the Strait of Gibraltar, south of Spain (36° N), ≈0.5 nautical mile off the Tarifa coast (Figure 1c) and at the same depth range. The Tarifa reef is characterized by strong tidal currents with peaks of 2.5 m s−1 and linked to the presence of upwelling zones [10]. In order to characterize the thermal gradient between both locations, sea surface temperature (SST) was analyzed monthly over a period of 10 years (2009–2018) using area averaging temperature, corresponding to those areas in which the surveys were executed. The data were selected from SST detected by the moderate resolution imaging spectroradiometer (MODIS)-Aqua sensor during night time, available on NASA’s Giovanni Web [11], and a t-test (α = 0.5, two-sided) was used to describe SST differences between locations. In addition, seawater temperature (°C), relative light (lux) and water nutrient concentration (nitrate and phosphate) instant measures were taken in situ during the sampling time (see data in Supplementary Materials, Figure S1). The snapshot surveys were conducted on 26 July 2015 in Parcel and on 30 September 2015 in Tarifa, using a small vessel adapted for diving operations.

Ichthyofauna (adult and subadult individuals) were counted and identified within each location. Replicated belt transects (n = 6) of 100 m2 (25 × 4 m), randomly orientated and separated at least by 50 m, were deployed by the same scuba diver. Along each transect, the diver swam at constant speed, annotating the abundance of each fish species. All samples were taken during daylight hours (i.e., 10:00 and 16:00 UTC+00:00) [12,13,14]. Fishes were identified to species level and classified in two climatic affinity groups: ‘cold-water’ boreal fishes and ‘warm-water’ Lusitanian fishes, following their distributional ranges and previous categorizations across the eastern Atlantic [12,15,16]. Cold-water species are usually considered to be northerly taxa that extend north to the Norwegian Sea and Icelandic waters, with southern limits of distribution around the British Isles, west of Brittany, or further south to Iberia, usually in low numbers. Warm-water Lusitanian fishes are usually abundant from the Iberian Peninsula, including the Mediterranean Sea, to the British Isles. Species richness (number of species), proportion of species of each climatic group, and percent relative abundance per species (based on mean number of observed individuals) were calculated for each location.
Algal assemblages were assessed using six replicate quadrats (50 × 50 cm, tens to hundreds of meters apart) randomly deployed in each location. Sampling design and resolution were similar to previous studies aimed at describing assemblage-level dynamics of macroalgal systems dominated by small subsurface kelps, e.g., [12,17]. Macroalgae sampling was carried out by scuba divers by scraping all seaweed fronds within each quadrat [12,17]. Algae species within each sample were identified to the lowest feasible taxonomic level and weighed (wet weight after removing excess water). Finally, each taxon was allocated to one of three climatic affinity groups: cold-water Atlantic boreal, warm-water Lusitanian, or widely distributed species [4,18]. Species richness (number of species), the proportion of species for each climatic group, and percent relative abundance per species (based on mean wet biomass) were calculated for each location.

A total of 18 fish species from eight families were registered in the two locations, with three cold-water boreal species and 16 warm-water Lusitanian species (Table 1). The species richness was higher in Tarifa (14 species) than in Parcel (nine species) (Figure 3a). Labrus bergylta and Trisopterus luscus, both cold-water boreal affinity species were the most abundant fish species in Parcel (29.3 and 22.0%, respectively), followed by Centrolabrus exoletus (21.3%, warm water) and Pollachius pollachius (16.7%, cold water) (Figure 4). In Tarifa, all but Trisopterus luscus (1.4%) were warm-water Lusitanian species, with Boops boops and Chromis chromis the most representative species (39.5 and 14.1%, respectively, Figure 4).
A total of 23 macroalgal species belonging to two phyla (Rhodophyta and Ochrophyta) were identified in Parcel (13 species) and Tarifa (15 species), with five cold-water species, seven warm-water species, and 11 widely distributed species (Table 2). The main contribution to the species richness was from Rhodophyta, with the orders Ceramiales and Gigartinales being particularly rich (five and three species, respectively, Table 2). Ochrophyta were mostly represented by the orders Dictyotales, Laminariales, and Tilopteridales (two species each). When grouped according to their climate affinity, macroalgal assemblages at both Parcel and Tarifa showed a dominance of widely distributed species (53.8 and 46.7% of total species, respectively, Figure 3b). Parcel showed equal proportion of cold- and warm-water taxa (23.1%), while Tarifa showed a higher proportion of warm-water taxa (40.0%) than cold-water species (13.3%; Figure 3b). In terms of biomass, kelps were the most representative algae in both locations (Figure 4). In Parcel, kelp species Laminaria hyperborea and Phyllariopsis brevipes accounted for 71% of total biomass, while Saccorhiza polyschides and Laminaria ochroleuca represented 85.7% of total biomass in Tarifa (Figure 4). In both locations, the higher relative biomass accounted for cold-water kelp species (Figure 4).

Our snapshot study at the temperate reefs (25–30 m) of Parcel and Tarifa coastal waters have revealed records of 23 macroalgal species and 18 fish taxa. Parcel and Tarifa are within the same marine ecoregion, the South European Atlantic Shelf, but with nonhomogeneous ocean climate and potential biodiversity differences [7]. For example, previous studies have registered a similar seawater temperature gradient of 1–3 °C across the Viana Castelo and Gibraltar Strait regions [12,20]. Our sampling sites, Parcel (northern location) and Tarifa (southern location) are within those regions and have revealed on average a similar thermal gradient during the analyzed 10-year period, with warmer water in Tarifa than in Parcel (3.2 °C difference). The thermal affinity was reflected in terms of fish abundance, with a high proportion of warm-water fish species in Tarifa and of cold-water fish species in Parcel. The highest biomass recorded in Parcel was for the kelp Laminaria hyperborea, a cold-water species, while in Tarifa the highest biomass value was recorded for the cold-water kelp Saccorhiza polyschides and secondly for the warm-water kelp species, Laminaria ochroleuca. Not surprisingly, our results demonstrated higher abundance of cold-water species in Parcel while warm-water species are dominant in Tarifa, in accordance with the registered abiotic conditions. Nevertheless, the high representativeness of a cold-water species at the Tarifa deeper reefs may suggest favorable climatic conditions at least at the studied depth range (25–30 m) where S. polyschides could benefit from the colder waters from the bottom and avoid thermal floatations more frequently and intensely at the very shallow or intertidal areas near the same location.
Ocean climate patterns, e.g., seawater temperature, primary productivity, upwelling regimen [2,12,21,22] and/or biologic interactions, e.g., herbivory [13,23] (Figure S2) are amongst the factors contributing to the biodiversity distribution patterns. This study represents only a snapshot of the biodiversity at these locations and the recorded species list should not be considered comprehensive. Nevertheless, this study may represent a valuable baseline for future studies in Tarifa and Parcel reefs regarding species distributional shifting or tropicalization. Indeed, episodes of tropicalization of temperate waters where cold-water species retreating poleward concomitantly with the advance of tropical or subtropical affinity species are becoming more frequent [24,25], along and within the studied regions [26,27,28,29]. Biodiversity records in these regions are usually limited to intertidal or subtidal levels up to 15 m [12,30,31] and studies at deeper depths are scarce. Deep-water environments can play an important role as refugia [32] and are logistically difficult to study, therefore more efforts are needed to further increase quantitative and qualitative biodiversity data, including different spatial and time scales.

The following are available online at https://www.mdpi.com/1424-2818/12/1/26/s1, Figure S1: In situ measurements of abiotic data of Parcel and Tarifa, Figure S2: Herbivory marks on algae.

João N. Franco and Carmen B. de los Santos were supported by the Portuguese national funds from FCT—Foundation for Science and Technology through fellowships SFRH/BD/84933/2012 and SFRH/BPD/119344/2016, respectively. Additional funding was provided from the project SEEINGSHORE (NORTE-01-0145-FEDER-031893), co-financed by NORTE 2020, Portugal 2020 and the European Union through the ERDF, and by FCT through national funds. This study also received Portuguese national funds from FCT through the project UID/Multi/04326/2019.

We would like to thanks to Cavaleiros do Mar and YellowSub Tarifa diving centers for logistic support. We acknowledge the MODIS mission scientists and associated NASA personnel for the production of the satellite data used in this research effort. We also acknowledge F. Tuya, T. Wernberg and B. Martínez for underwater field assistance in Parcel and anonymous reviewers for their suggestions. 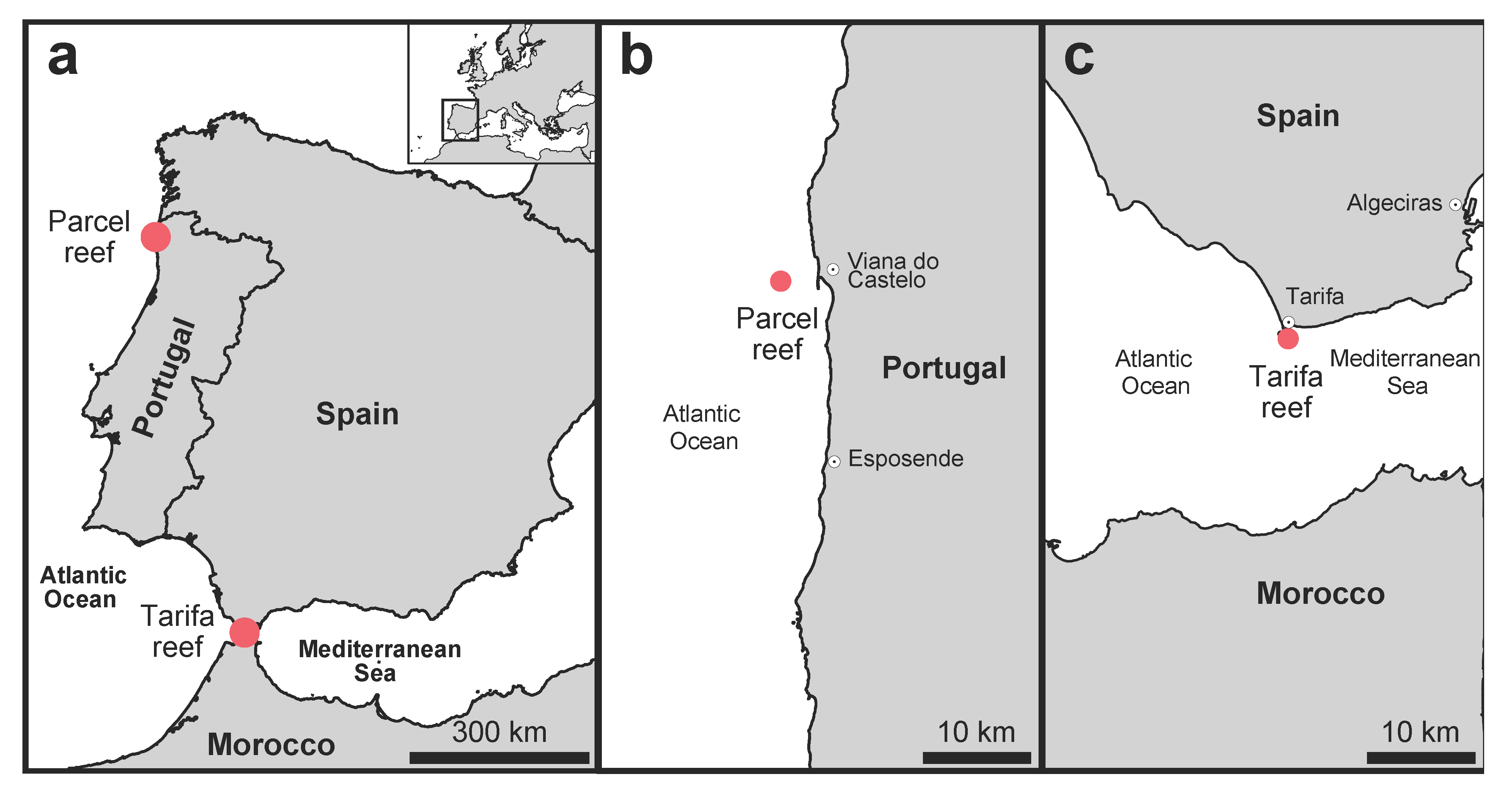 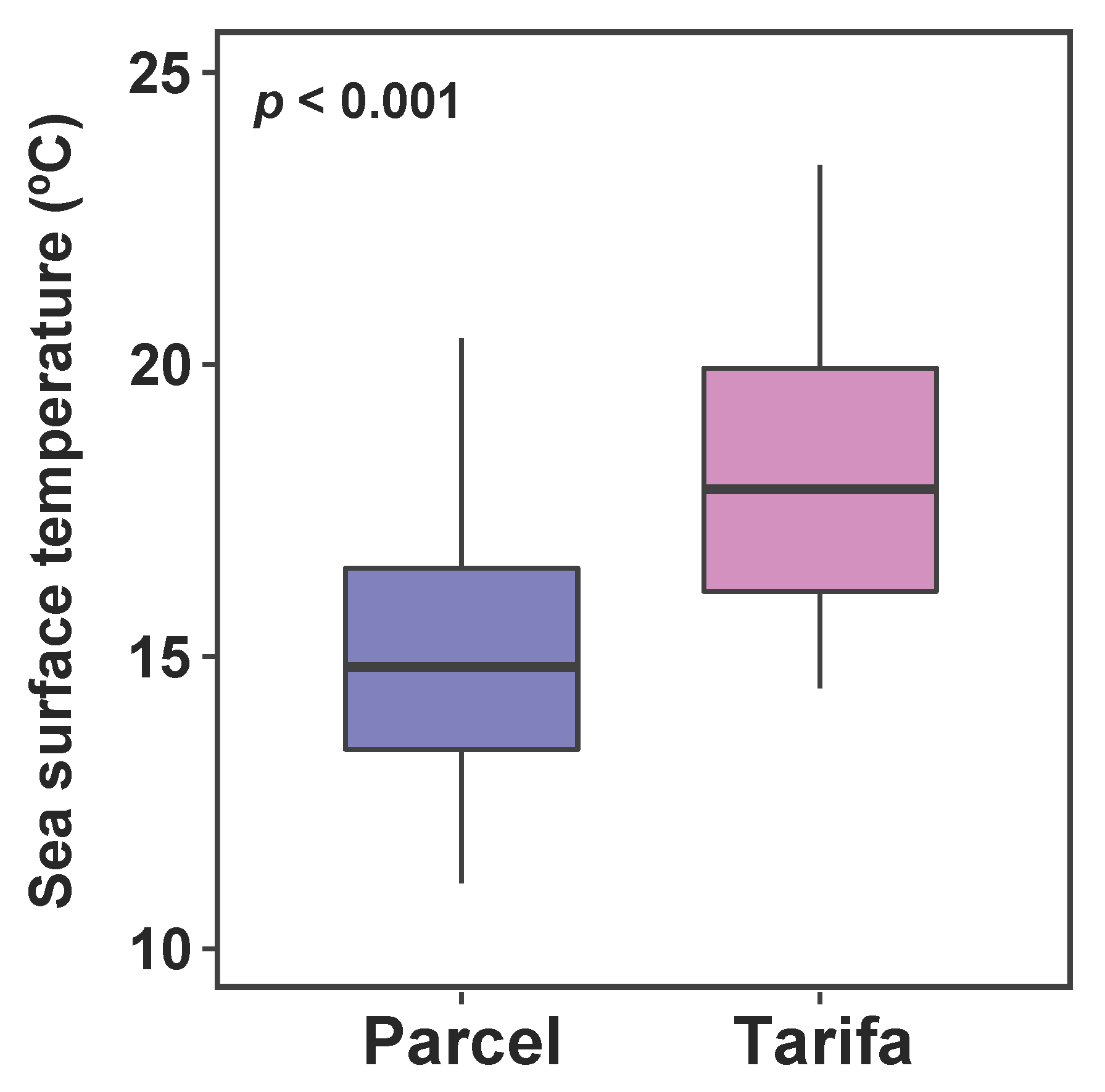 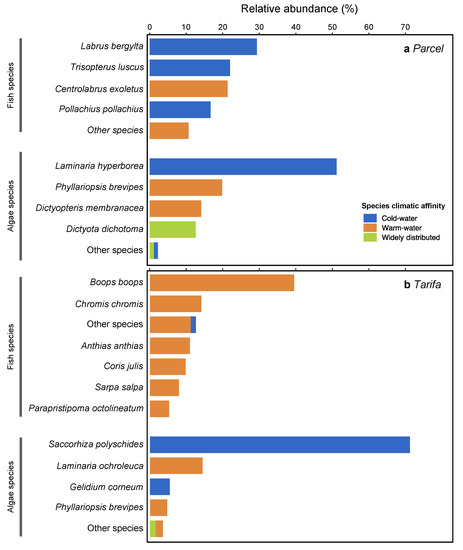