The recently extinct New Zealand adzebills (Aptornithidae, Aptornis spp.) were an enigmatic group of large flightless birds that have long eluded precise taxonomic assignment as they do not closely resemble any extant birds. Adzebills were nearly wingless, weighed approximately 16–19 kg, and possessed massive adze-like reinforced bills whose function remains unknown. Using hybridisation enrichment and high-throughput sequencing of DNA extracted from subfossil bone and eggshell, near-complete mitochondrial genomes were successfully assembled from the two Quaternary adzebill species: the North Island Adzebill (Aptornis otidiformis) and South Island Adzebill (A. defossor). Molecular phylogenetic analyses confirm that adzebills are members of the Ralloidea (rails and allies) and are sister-taxon to the Sarothruridae, which our results suggest comprises the Madagascan wood rails (Mentocrex, two likely sp.) in addition to the tiny (<50 gram) rail-like Afro-Madagascan flufftails (Sarothrura, 9 spp.). Node age estimates indicate that the split between adzebills and Sarothruridae occurred ~39.6 Ma, suggesting that the ancestors of the adzebills arrived in New Zealand by long-distance dispersal rather than continental vicariance. This newly identified biogeographic link between physically distant New Zealand and Afro-Madagascar, echoed by the relationship between the New Zealand kiwi (Apterygiformes) and Madagascan elephant-birds (Aepyornithiformes), suggests that the adzebill’s near relatives were formerly more widespread. In addition, our estimate for the divergence time between the two Quaternary adzebill species (0.2–2.3 Ma) coincides with the emergence of a land-bridge between the North and South islands of New Zealand (ca. 1.5–2 Ma). This relatively recent divergence suggests that North Island adzebills are the result of a relatively recent dispersal from the South Island, from which the earliest (Miocene) adzebill fossil has been described. View Full-Text
Keywords: Adzebill; Aptornis; New Zealand; ancient DNA; phylogenetics Adzebill; Aptornis; New Zealand; ancient DNA; phylogenetics
►▼ Show Figures 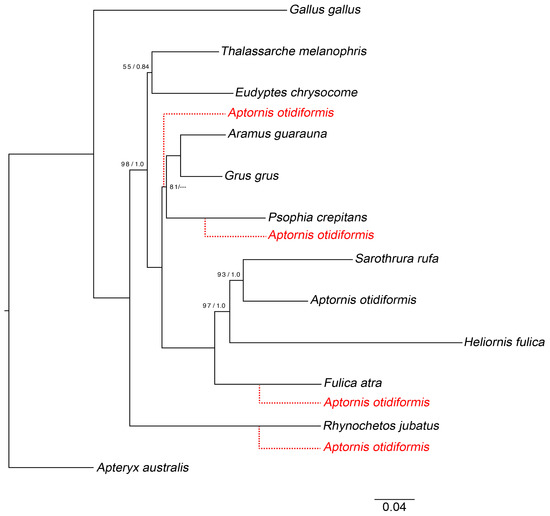