Coral reef assemblages generally form gradients of spatial structures which are governed by a variety of interacting physical and biological processes that vary in intensity, frequency, and spatial scale. Assessing the structure of contemporary reef assemblages may help to understand future changes and to identify appropriate conservation actions. The spatial distribution and interannual variability (from 2006 to 2008) of coral assemblages were investigated at 10 stations in the southwestern lagoon of New Caledonia, and the strength of the cross-shelf gradient was evaluated. Coral cover, generic richness, and abundance of adult and juvenile assemblages were highly variable within and among the three major reef habitats (fringing, mid-shelf, and barrier reefs). Abundance increased with distance from shore, whereas generic richness and cover were not correlated with shelf position. Assemblage composition was generally related to habitat, even though some mid-shelf and fringing reef assemblages resembled those observed on other habitats. A significant correlation between juvenile and adult distributions was recorded, suggesting that adult assemblages are partly controlled by the short-term history of recruitment patterns. The interannual variation of coral assemblages was far less pronounced, with significant changes only detected at some mid-shelf and barrier reefs, for a few genera characterised by high turn-over. View Full-Text
Keywords: coral reefs; scleractinian corals; spatial heterogeneity; interannual variability; recruitment; environmental factors; land-ocean gradient; New Caledonia coral reefs; scleractinian corals; spatial heterogeneity; interannual variability; recruitment; environmental factors; land-ocean gradient; New Caledonia
►▼ Show Figures 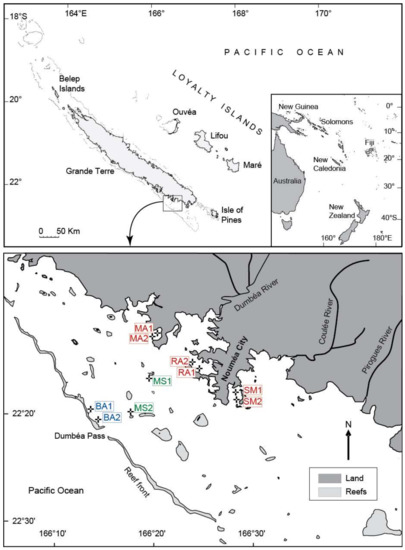