The cyanobacteriosponge Terpios hoshinota has been reported throughout the Indo-Pacific including the Great Barrier Reef, Australia. The species encrusts live coral, giant clams, and other benthos and can be a threat to benthic communities on coral reefs. The Kimberley region of Western Australia has some of the least impacted reefs globally. We report for the first time the presence of T. hoshinota in the eastern Indian Ocean on Kimberley inshore coral reefs. Given its invasive potential, reef health surveys should include this species, and monitoring approaches developed to audit the remote Kimberley for this and other invasive species.
Keywords: barcoding; giant clam; hard coral; invasive species; Porifera; Scleractinia barcoding; giant clam; hard coral; invasive species; Porifera; Scleractinia

Global warming, declining water quality, habitat modification, overfishing, and outbreaks of corallivorous predators are major threats to the future of coral reefs. Over the last three decades thermal stress has caused three global coral mortality events [1]. Sponge overgrowth can also cause significant declines in coral cover on tropical coral reefs. Since its discovery in Guam in 1971 [2], the encrusting sponge Terpios hoshinota appears to have expanded its geological range westward through the Indo-Pacific. It is an aggressive space competitor, grows rapidly (1–2mm per day; [3]) and actively overgrows corals. Since it persists in the environment (25 years; [4]), and is difficult to remove from reefs [5], T. hoshinota is emerging as a major threat to benthic communities on coral reefs [6].
Terpios hoshinota has a thin (< 1 mm), gray to grayish-brown or black encrusting growth habit, and characteristic multilobed tylostyle spicules (Supplementary Figure S1; [7]). It occurs on live and dead coral, and on live coral is commonly referred to as ‘black disease’ because of its colour and the fact that it overgrows and suffocates coral polyps [7]. Terpios hoshinota contains a symbiotic intercellular cyanobacterial group closely related to Prochloron sp. [3], which may provide photosynthesis products for the sponge [3].
Terpios hoshinota is widespread in the Indo-Pacific (Figure 1). It has been reported from Micronesia and the Northern Mariana Islands, Taiwan, and Japan [7,8,9]; the Great Barrier Reef [10]; American Samoa, the Philippines, and the South China Sea [11]; Papua New Guinea [12]; and Indonesia [13,14,15,16]. It was first reported in the Indian Ocean in 2014 (the Maldives; [17]), and has since been recorded from Mauritius [18] and Palk Bay in India [6]. Terpios hoshinota has been associated with areas of high turbidity and degraded reefs [7], but also occurs in relatively pristine and low turbidity environments, including Lizard Island, Great Barrier Reef [10] and the Ryukyu Islands, Japan [9]. Prior to this report, T. hoshinota had not been recorded from Western Australia.
Terpios hoshinota encrusts numerous coral genera including Acropora, Porites, Montipora, Merulina, Goniastrea, Lobophyllia, Favia, Goniopora, Leptastrea, Stylophora, Astreopora and Oulophyllia [7,9,19]. It has also been observed on octocoral and hydrozoan species including Tubipora musica, Heliopora coerulea and Millepora spp. [19]; on the zoantharian Palythoa tuberculosa [9]; on shells of living Tridacna spp. including T. squamosa [7,9]; and on red calcareous algae and Halimeda gigas [19]. Potentially, on some reefs it may be present in low numbers, but is cryptic and undetected until it infects a number of organisms in an area and thus becomes conspicuous.
The Kimberley contains the most northerly coral reef ecosystems in Western Australia. These range from inshore coastal fringing and large platform reefs to offshore shoals and shelf-edge atolls [20]. Inshore reefs are subject to large tides (>11 m) and turbid waters [21], while offshore reefs are characterised by clear low nutrient waters. Despite the potential for seasonal cyclones [21], the Kimberley reef ecosystems are among the least impacted worldwide [22]. The area is largely free from land-based anthropogenic disturbances, other than some traditional fishing and harvesting [23] and a moderate level of commercial fishing [24]. Recreational fishing and tourism are increasing, and the region has large oil and gas reserves [25] that may be exploited in the future. Coral bleaching has occurred in offshore areas, including at Scott Reef in 1998 and 2016 [1,26,27], and at Ashmore Reef in 2003 and 2010 [28,29]. Only localised bleaching has been recorded (2016) on some inshore reefs in the western Kimberley [30].
The recent creation of marine parks in the region (e.g., the Lalang-garram/Camden Sound and North Kimberley marine parks) and the increasing impacts of climate change in Western Australia [30,31] reinforce the need to monitor the diversity and health of benthic communities across the Kimberley. Here, we describe the first detection of T. hoshinota in the Kimberley, from the Bonaparte Archipelago, and discuss the implications of its presence in one of Australia’s most remote coral reef habitats.

During a biodiversity study of the Bonaparte Archipelago in September 2016 [32], an encrusting sponge resembling T. hoshinota was observed at two sites, growing on Acropora tenuis, A. hyacinthus (Figure 2) and Tridacna squamosa. Five samples of the sponge were collected, photographed, and preserved in 96% ethanol for subsequent molecular and morphological analysis. For assessing spicule morphology, subsamples were dissolved in bleach, the spicules were rinsed in distilled water and dried on glass slides, mounted in Shandon EZ-Mount (Thermo Electron Corporation), and examined using light microscopy (Olympus BX50).
Genomic DNA was extracted (Qiagen Blood & Tissue DNeasy kit; standard protocols) from subsamples of the Western Australia T. hoshinota specimens, and for comparison from samples collected from Queensland (Lizard Island) and Japan (Kagoshima) (see Table 1). The first part of the cytochrome oxidase c subunit I gene (COI), the ‘barcoding fragment’, was amplified from the extracted DNA, and the 18S gene from two of the subsamples (WAMZ 83368 and Z83369) was also sequenced for additional verification purposes (Table 2). The amplicons were purified and sequenced at the Australian Genome Research Facility (Perth), and bi-directional reads were assembled and edited using Geneious software (v11.1.5; https://www.geneious.com). The relationships among the sequenced samples, and additional COI data available through GenBank, were analysed using a statistical parsimony network algorithm implemented in PopART [33].

The COI sequences for T. hoshinota formed a single network comprising four haplotypes, with few mutational steps evident among specimens (Figure 3). All samples from the Kimberley area (n = 5) shared a single haplotype, which was also shared with one of the Indonesian haplotypes (C2) from GenBank. This pattern is consistent with a single point of introduction to Western Australia, however, further data from additional loci would be needed to confirm this more confidently.
This is the first report of T. hoshinota in Western Australia and the eastern Indian Ocean, and the fourth report of the species in the Indian Ocean. We confirmed its occurrence at two locations (Montalivet and Maret island groups) in the Bonaparte Archipelago (central inshore Kimberley). It was first collected during intertidal surveys at south-west Berthier Island (station 197), where it was observed overgrowing Acropora tenuis and A. hyacinthus in a shallow rock pool. It was subsequently collected subtidally (12 m) from the clam T. squamosa at West Montalivet Island (station 196). An additional putative sighting was at Heritage Reef (station 191), based on photographic evidence of a sponge resembling T. hoshinota overgrowing Seriatopora hystrix and A. latistella (Supplementary Figures S2 and S3).
Historic Kimberley sponge collections in museums throughout Australia were assessed and resulted in the recording of 342 species, but not T. hoshinota [39]. More recently (2009–2014), multi-taxon diversity was surveyed at 179 stations (inshore, offshore, intertidal and subtidal) throughout the Kimberley, including the Bonaparte Archipelago [40], but T. hoshinota was not detected. This suggests T. hoshinota may have arrived recently in the Kimberley, possibly after 2014, although it may have been there longer but not detected.
If T. hoshinota arrived in the Kimberley after 2014, its method of introduction is of particular interest. It may have been translocated or migrated naturally. A report from Taiwan found T. hoshinota released brooded larvae monthly over five months (April–August), potentially releasing numerous recruits to an area, but the dispersal of larvae was localised (metres) unless they are swept away by strong waves [41]. Juvenile T. hoshinota had spicules at five days and oscula at seven days after settlement, at which time they began overgrowing live coral [42]. Whether T. hoshinota larvae can survive and be transported between locations by cyclonic events, large tides or shipping has not been investigated, but they are not long-lived [43], and consequently cannot disperse widely.
To date, the reasons for T. hoshinota invasions are not well understood but studies continue to elucidate possible mechanisms. Some authors suggest more research on ecological interactions between the sponges, corals and their associated microbes is needed [3,44]; others have examined possible mitigation techniques such as experimental shading to reduce the nutritional outputs of the intercellular cyanobacteria [6]. Sponge dispersal mechanisms are critical [43] and data is accumulating on the impacts of local environmental conditions [45].
While the causes of T. hoshinota outbreaks remain unclear, the ability of the species to spread over coral reefs and cause coral death is undisputed and concerning. A rapid decline in coral cover over eight years was reported at the northern end of Yongxing Island (China), with T. hoshinota thought to be responsible for mass coral mortality [11]. In contrast, outbreaks of T. hoshinota at Tokunoshima Island (Kagoshima, Japan) were found to decline, perhaps because of subtropical typhoons [9]. While there has been no outbreak event by T. hoshinota in the Kimberley, our observations of its presence suggest monitoring may be required to reduce the possibility of it spreading undetected. T. hoshinota is visually striking, and we encourage regional management authorities to include it in their reef health surveys. Where possible, small fragments of gray-black coral-encrusting sponge should be collected for identification using molecular or morphological techniques. In addition, eDNA monitoring approaches could be used to audit waters in remote areas including the Kimberley, to track the spread of this and other invasive species (e.g., the crown-of-thorns seastar) that potentially threaten the health of this internationally significant coral reef system [20,46].

J.F., Z.T.R. and N.G.W. conceived the study and wrote the paper. N.G.W. conducted the molecular analyses, J.F. identified the sponge, field images are by Z.T.R.

We thank Oliver Gomez for technical support and Merrick Ekins for Queensland Museum specimens. The project was undertaken as a subproject of WAMSI 1.1.1 with the support of Patrick Seares and Luke Twomey (WAMSI), Stuart Field (DBCA) and Andrew Heyward (AIMS). We are grateful to Tom Vigilante from the Wunambal Gaambera Aboriginal Corporation for research facilitation and Uunguu Rangers Leonie Cheinmora and Marlene Djanghara for participating in fieldwork. We thank three anonymous reviewers for their comments on the manuscript. 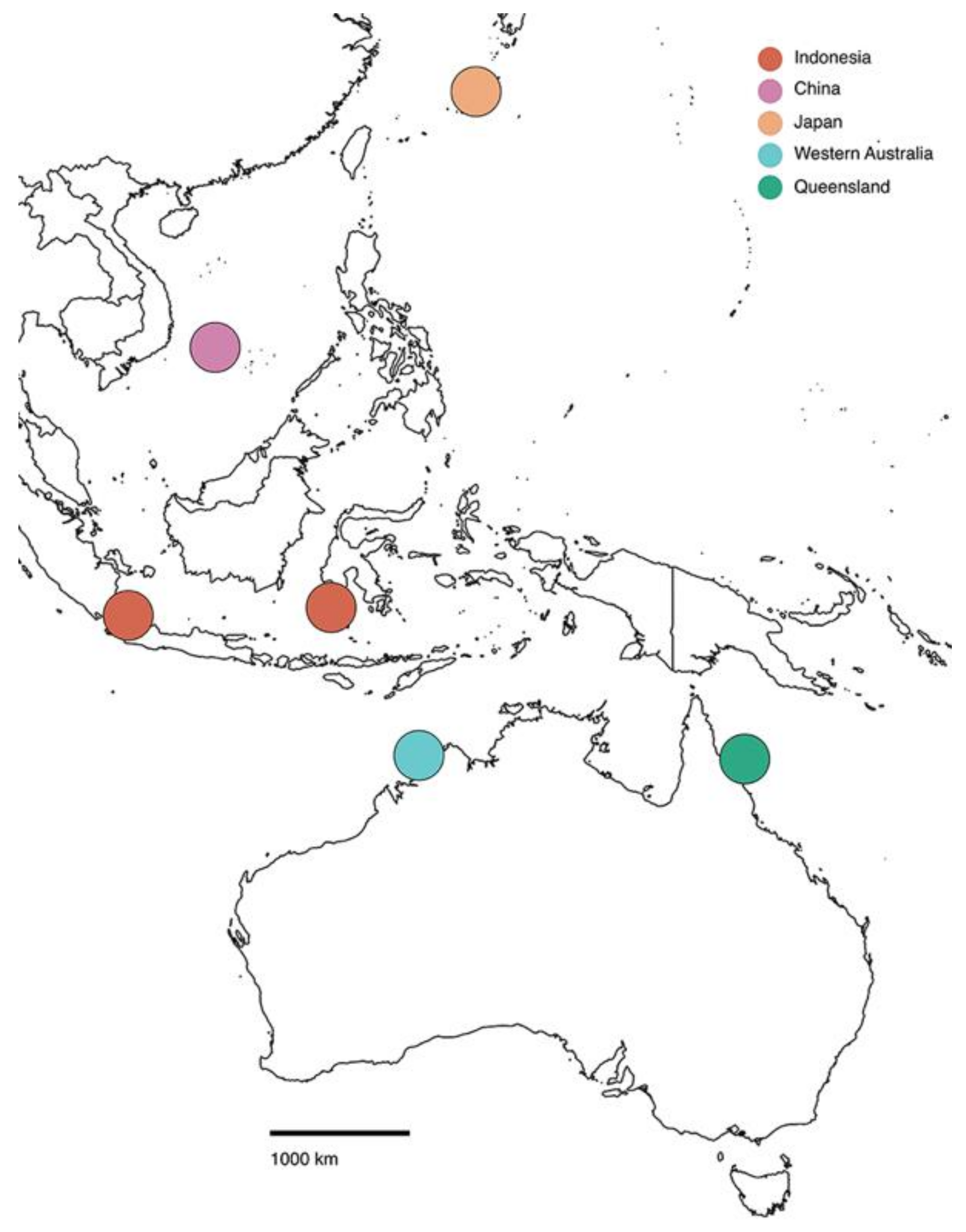 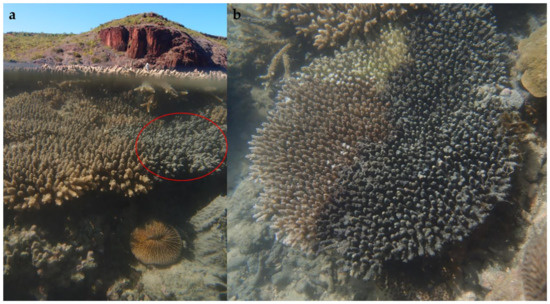 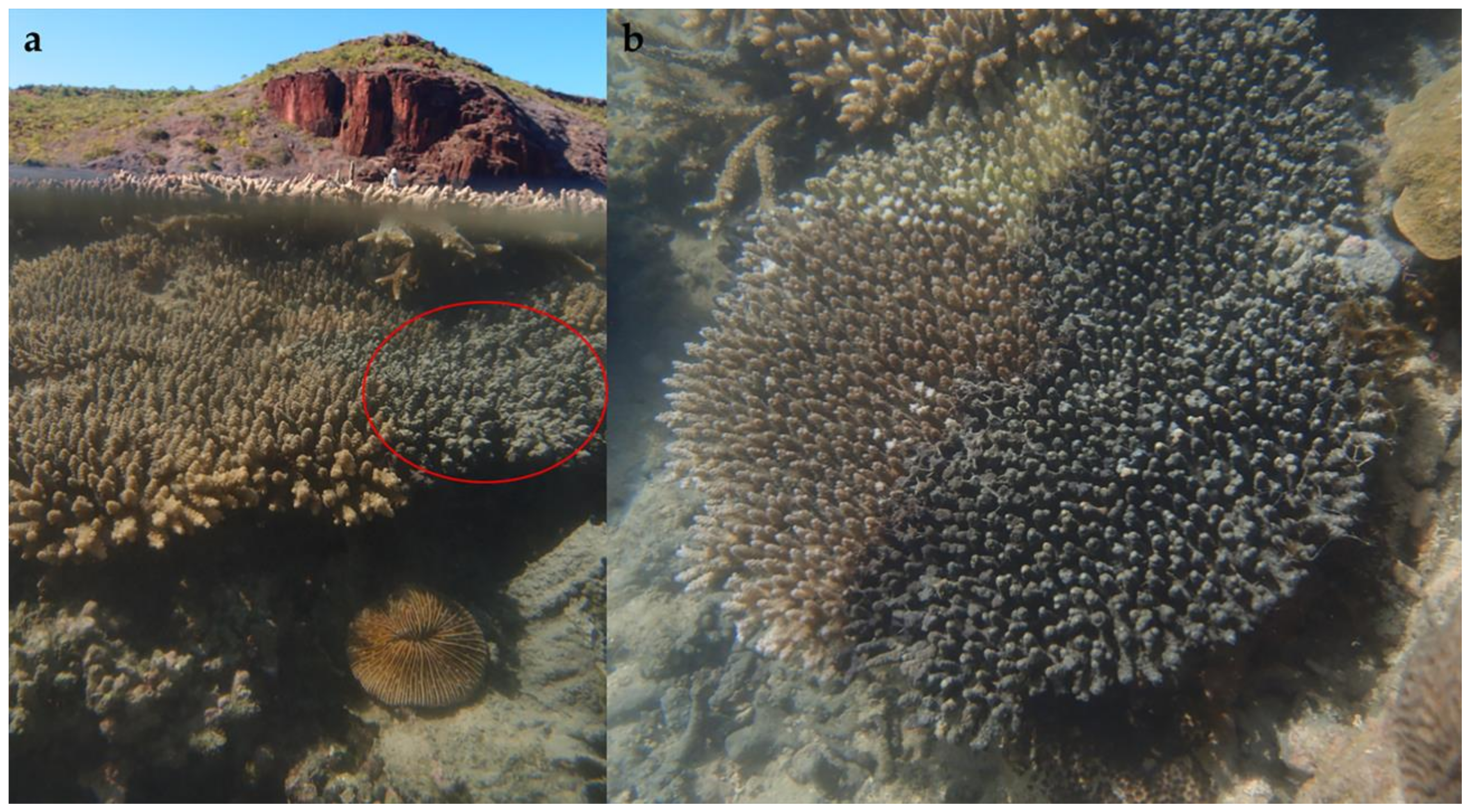 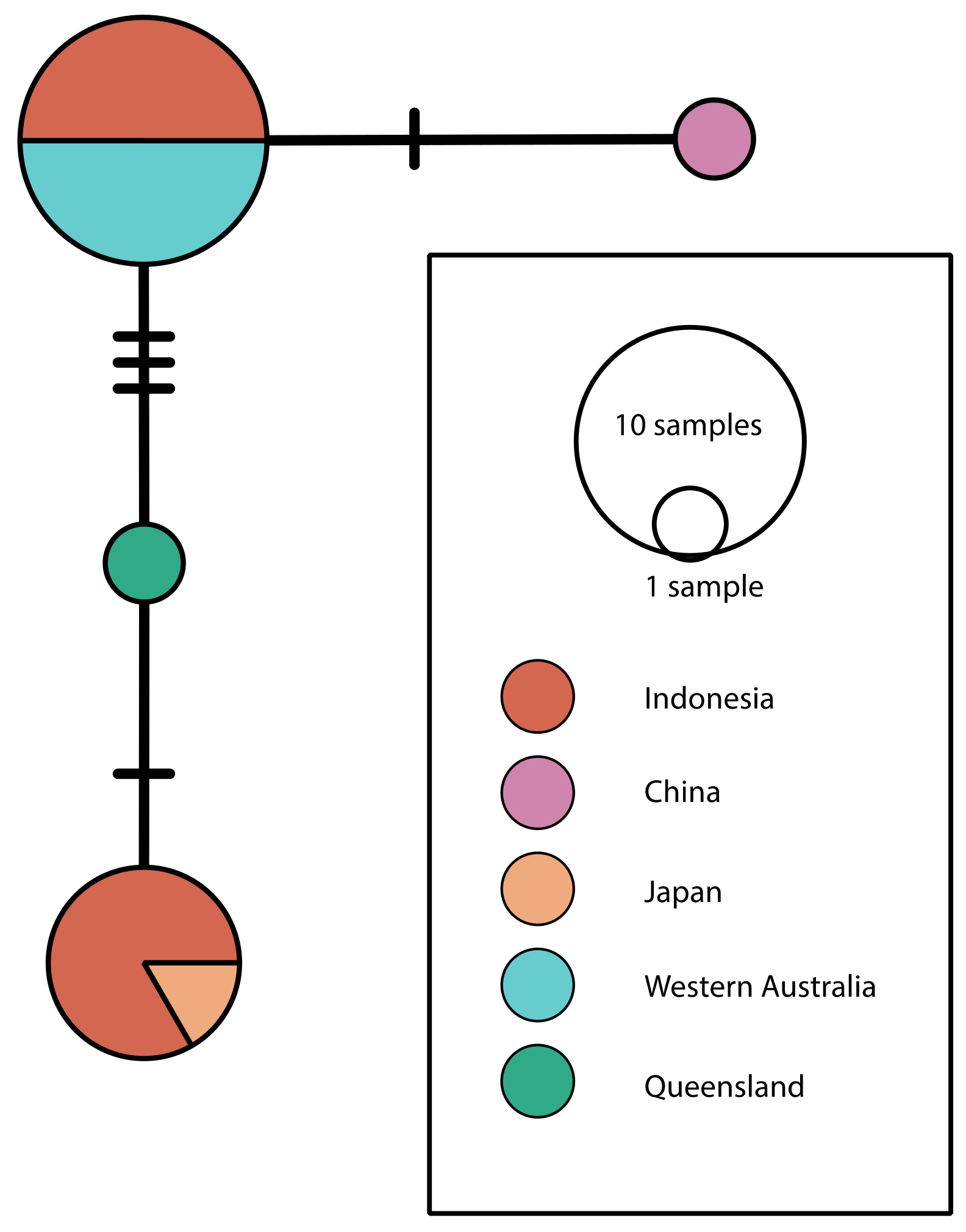