Influence of a Large Lake on the Winter Range of a Small Mammal: Lake Michigan and the Silver-Haired Bat (Lasionycteris noctivagans)

We examine factors affecting the winter range limit of a migrating mammal, the silver-haired bat (Lasionycteris noctivagans), in states surrounding Lake Michigan, the fourth largest freshwater lake in the world. Using 555 citizen-based captures gathered between 1977 and 2016, we show that silver-haired bats overwinter (December–February) as far north as the 45th parallel, in areas roughly demarcated by the −12.2 °C (10 °F) mean daily minimum isotherm for January. Although summering populations adjacent to the lake are dominated by males, wintering animals are predominantly female and presumably migrants from north of Lake Superior. Logistic regression suggests that silver-haired bats are more likely to overwinter in warm areas, in counties near the lake, in urbanized locales, and on the west side of the lake. We believe that these small-bodied, solitary bats are hibernating in buildings and that use of human-made structures has allowed the silver-haired bat to overwinter in regions that are devoid of mines, caves and rock crevices and that are too cold for successful hibernation in trees. Lake Michigan impacts where this animal overwinters, presumably through the moderating influence of the lake on multiple aspects of the surrounding climate and because the shoreline likely is a major migratory pathway. View Full-Text
Keywords: Lasionycteris noctivagans; silver-haired bat; range limit; geographic distribution Lasionycteris noctivagans; silver-haired bat; range limit; geographic distribution
►▼ Show Figures 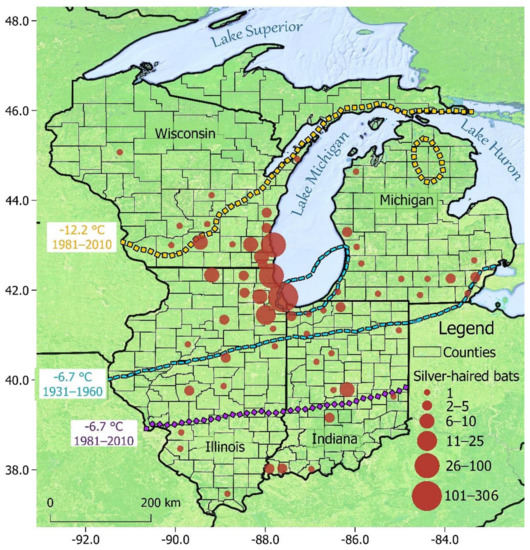